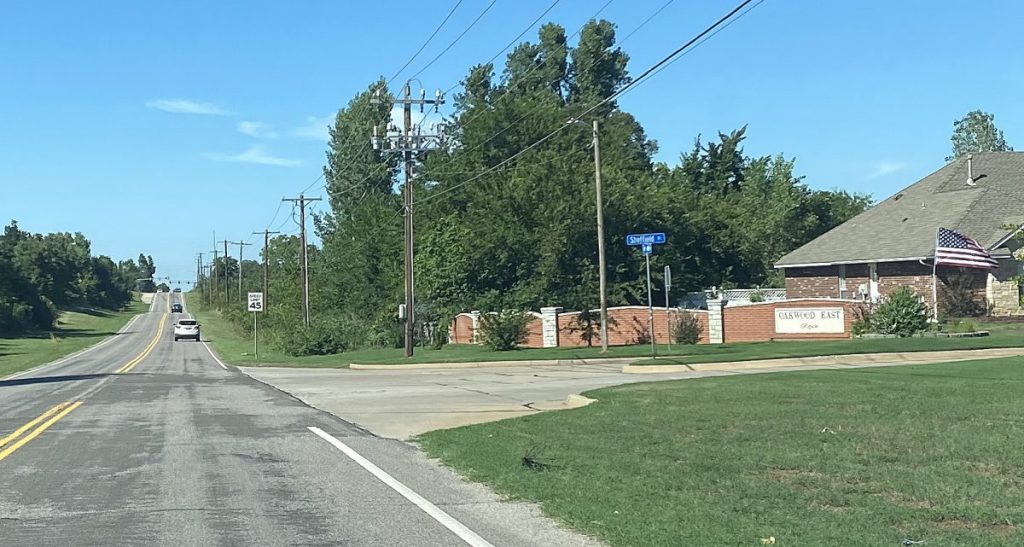 Midwest City leaders will consider a request to rezone 38 acres near SE 15th St. and Westminster Rd. for a multi-family housing development. Photo by Jeff Harrison

Midwest City Planning Commissioners will consider a mixed-use project that would bring multi-family housing and commercial space to the east side.

The developer is seeking rezone 38 acres to allow for medium and high density residential and commercial space. The property is currently zoned as a planned unit development with space for commercial, residential and office uses.

Seth Koenig owns the property. Aaron Hale with Engineered by Design LLC is the applicant for the rezoning.

The mixed-use project would be divided into three parcels – each with different zoning, according to a conceptual site plan.

The commercial portion is slated for 6 acres on the north end of the property, near the intersection of SE 15th St. and Westminster Rd.

The high-density residential with apartments would be located just south of that on about 22 acres. The developer plans to build 12 three-story buildings with a total of 216 units.

Medium density residential zoning would be located on the south end of the property. It would consist of 83 townhouses.

City staff also raised concerns about the project’s impact on city infrastructure.  In a letter to the developer, Brandon Bundy, director of engineering and construction services for Midwest City, said the development would overtax the existing sanitary sewer system that serves the area. Midwest City is currently undergoing a study of the sanitary sewer system on the east side.

Improvements to Westminster Rd. will not be required as part of the zoning. Bundy said they will require a traffic study as part of the building permit or platting.

Developers offered to stagger the development into two phases. About half of the residential units would be completed in spring 2023 and the rest by spring 2026. The timeline for the commercial portion was uncertain.

In a staff report, Billy Harless, community development director, recommended the city deny the zoning request until the sewer study is completed and capacity issues can be addressed.

Residents have also pushed back against the project over concerns about traffic, stormwater drainage, increased crime, and overcrowding of local schools. As of Friday, the city received protests from 42 of the 76 residents who live within 300 feet of the development and received notice. Since at least 50% of the property owners signed the protest, the proposed zoning changes will require a super majority vote by the city council.

Last year, residents opposed a large residential development in the area. The proposed Summerview development would have included a mix of 900 single-family homes and apartments. The developer withdrew the proposal in November.

The nearby Boulevard at Lakeside apartment complex, 11300 SE 15th St., was built in 2016 despite strong opposition from residents in the nearby Oakwood East neighborhood.

The planning commission will review the zoning request at Tuesday’s meeting and make a recommendation to the city council.

The city council will consider the request at the Sept. 27 meeting.