As a team, Choctaw hit .275 and averaged 11.3 kills per set as the Lady Jackets slapped down a dozen aces and 34 kills on the visiting Midwest City squad.

Sophomore Malerie Hawk stepped into a new role, and recorded 11 kills on the night with no errors for a .687.

Carly Gregory, Taya Addington and Jayla Flient each had five kills on the night.

Macy Tyra put up 24 assists and a pair of kills for the Lady Jackets.

Freshman Addison McBroom stepped up with 12 digs and five assists for Choctaw.

With the win Choctaw hit the 13-4 mark on the season, while the Lady Bombers fell to 2-9 on the year.

Before the varsity tipped off, the neighboring rivals clashed with freshman and junior varsity competition.

“Midwest City is an improving program, and we didn’t take them lightly,” said Choctaw head coach Taryn Weber. “The freshmen and JV had some good games. Futures are bright for both programs.”

For more photos of Choctaw and Midwest City Volleyball check out our gallery on Facebook. 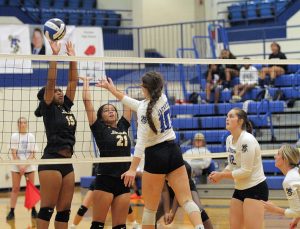 In week two rankings, released last week, Choctaw had an 11-4 record earning the No. 12 spot among Oklahoma’s largest high schools, Class 6A.

CHS added sweeps over Putnam City West and Midwest City to round out the week increasing their win streak to three straight, while improving their win percentage to the sixth best in all of Class 6A. 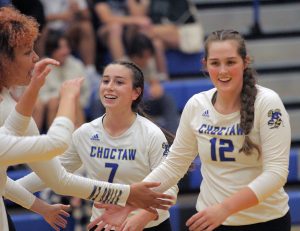 Midwest City had captured earlier wins over Putnam West and Harding Fine Arts, and the Lady Bombers were looking to rebound a seven-game skid after rallying during several sets of recent matches.

However, Choctaw coaches took the neighboring rival serious and ensured that losing streak would move to eight straight as the Lady Bombers fell to 2-9 on the year.

“This was another good sweep. We prepared really well for them because they’ve been playing really well lately and surprising a lot of people so we didn’t want to take them lightly,” said CHS coach Taryn Weber.

“We had a very strict practice plan yesterday and executed all of it today. They’ve definitely been shocking people. I went and watch them last week. So, I knew that they were doing different stuff for sure.”

The Lady Jackets are on a 12-day break after shutting out rival Midwest City Thursday.

“We’re going to have some rest and come back to work hard. The girls have been on for a month now. And this Labor Day weekend will be a really good opportunity to rest their bodies and come back better than ever,” said Weber.

Choctaw returns to action on the road next week taking on Putnam North and Yukon. Sept. 20 Choctaw travels to Enid.

Choctaw regularly finishes with a winning record, but has historically had bad draws entering regional competition. Choctaw coaches aim to change that by continuing to climb the rankings, and setting the Lady Jackets up for the prestigious Class 6A state tournament.

“We’re just trying to constantly hit better and focus on the things that we know are our weaknesses for when other teams scout us. When we get into the playoffs, and other teams are scouting us we want to be able to prepare for that,” said Weber.

Choctaw’s roster depth is increasing as younger players are stepping up to perform for the varsity.

“Right now, Malerie Hawk, a sophomore, is playing a new position due to COVID. She had to switch positions and play in somebody else’s shoes and did it nearly flawlessly. She stepped right in to a new position that we haven’t had her in yet, and performed in both games,” said Weber. “Also, Addison McBroom, a freshman, went in today as a DS and as a setter and played awesome. We want that from our younger players, and it’s showing for sure.”

For more photos of Choctaw and Midwest City Volleyball check out our gallery on Facebook. 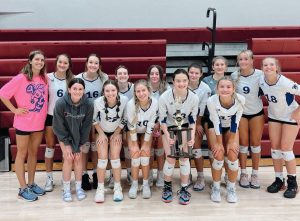 Weber and assistant coach Natalie Waxenfelter are working to rebuild the Choctaw program, which featured plenty of 3existing talent.

The CHS JV captured a silver finish at the Putnam City North Tournament.

Choctaw went 3-2 at the PCN tourney.

Choctaw’s roster depth is increasing as junior varsity and freshman squads are finding increased success on the court. CHS coaches say they’ll need those young athletes developing in order to keep the varsity successful in the future.

“I’m so excited to see our future,” said Weber. “The JV placed second in another tournament.”

“They’re improving so much, I mean, from where we started to where we are now. They’ve got two wins under their belt and we are just improving every day,” said Weber. “My expectations are rising every day for them.” 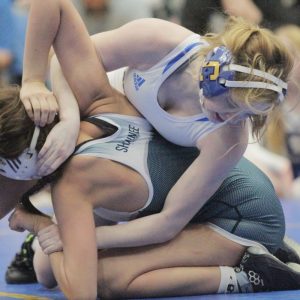