The town of Tuttle was founded following the arrival of the Frisco Railroad in 1902. About that time, a group met in Jason Carlyle’s store on Bond Street, where the Tuttle Methodist Church first found its roots in a Union Sunday School.
From there, the group moved to the new school house, located on the high hill where Tuttle Elementary School now stands.
In the summer of 1903, Reverend R. S. Satterfield, a young graduate from Vanderbilt University, came to Oklahoma with plans to hold a two-week revival.
The Tuttle Congregation was offered a church building from neighboring Union City if they had the means to move it. The church members picked cotton, served dinners, and more to raise the money to buy a lot for the new church building.
On April 13, 1910, Tuttle was hit by a severe wind and hail storm that destroyed much of the Methodist Church.
Between 1910 and 1920, the building was rebuilt to recover from the storm damage. In the 1930s, there was an addition built onto the building.
Along came the 1960’s and the congregation was growing. It was unanimously decided to build a new church.
The Methodist Church Conference approved new building plans on May 20, 1962. For several months, different sites were looked at for the location of the new church. Finally, three acres, formerly part of Lon Basset’s farm, were purchased and donated to the church by Roy and Ida Osborn. This became the site of the present-day First United Methodist Church of Tuttle (402 S. Cimarron).
On June 14, 1965, construction began on the new building by Bentley Ray Contractors of Cleburne, Texas. The church building was completed in November of that same year. However, due to a delay in the arrival of the new pews, the first church service in the new building was not held until January 16, 1966.
On December 17, 1965, the Women Society of Christian Service (WSCS) held their last meeting in the old church. The program lesson was given by Ida Osborn on “Evangelical United Brethren.” A devotional was given by Marie Davidson. The first meeting of the WSCS in the new building was on January 4, 1966. A devotional was given by Virgie Grimes. Maude Davis gave a program lesson on “Mission: The Christian’s Calling.”
On New Year’s Eve, 1965, a short meeting was held in the old church. The congregation proceeded to the new church sanctuary. Prayers and thanksgiving were given and a communion service was held.
In the middle of winter on January 29, 1966, the old Methodist Church and some of its remaining furniture were sold at public auction for $575. The building was torn down and moved to Marlow. The Tuttle Public Schools purchased the grounds to add to lots previously bought just west of the church site.
The congregation continued to grow. On August 17, 1972, a church meeting was held to have the United Methodist Conference approve a new addition on the north side of the church. Pastor Daris Parker asked Forrest O’Hara and John Paxton to present the new building program plans of 2,280 square feet, including a fellowship room, five classrooms, two rest rooms, and one store room, as well as central heat and air units.
At that time, several men of the church decided to give money to build a youth room onto the new addition, containing 640 square feet, making the total size of the new construction 2,920 square feet. Ground breaking for the new addition was on a Sunday morning following church service. A one-horse walking plow was used to break the ground. A rope was tied to the plow and the congregation pulled it with Goldie Bennett holding the handles. The plow had been in Goldie’s family for many years.
Community service has always been a key aspect of the church since its founding, so it is no surprise when four ladies of the church proposed an idea for a store to serve members of the Tuttle community. Those four ladies, including Kelly Baker, Lori Thompson, Elisha Van Ness, and Deborah Armstrong, brought the idea. The members of the First United Methodist Church decided that they could in fact run the store themselves. At first, the clothing for the store was kept and sorted in the garage of Elisha Van Ness. The store quickly moved to occupy a building in downtown Tuttle, where it continues to operate to this day.
Along with the Community Store, a food pantry was also started in the 1980’s. The food pantry has served hundreds of people from the community since its formation.
On January 16, 2011, the church held Heritage Sunday to celebrate the 45-year anniversary of the first worship service held in the present building. Those who were present at the time of the first worship service were recognized during the morning service. Also during the morning service, Vern Wilkerson shared his story of how the church bell, which first hung in the old church building, was moved and installed on the present grounds, where it can be seen today hung amongst the three Crosses on the First United Methodist Church.
Fellowship dinner was served at noon, directly after the service. Those on the Heritage Committee put the event together.
This report is just a tiny representation of the history of the First United Methodist Church and Tuttle itself that the Heritage Committee has maintained.
The Heritage Committee has combined and preserved many items and photos that they will have on display this coming Sunday. Sunday School will begin at 10 a.m. and Worship will begin at 11 a.m. Fellowship dinner will follow the Church service.
Again, the Church is located at 402 South Cimarron Road in Tuttle, just north of Tuttle Middle School.
The Church will be open Saturday, September 24 if anyone would like to see the display.
Editor’s note: Seth Paxton contributed heavily to this article with research he did in 2012. 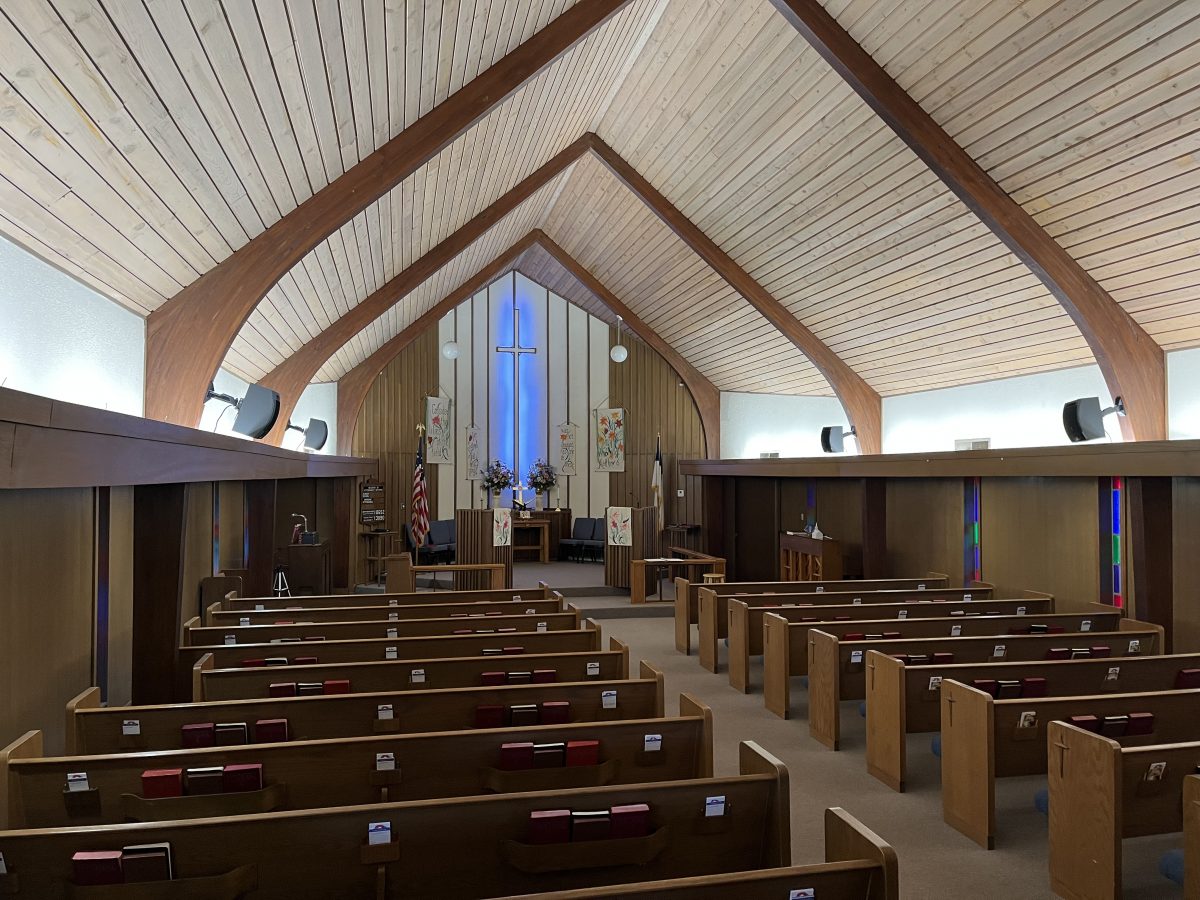 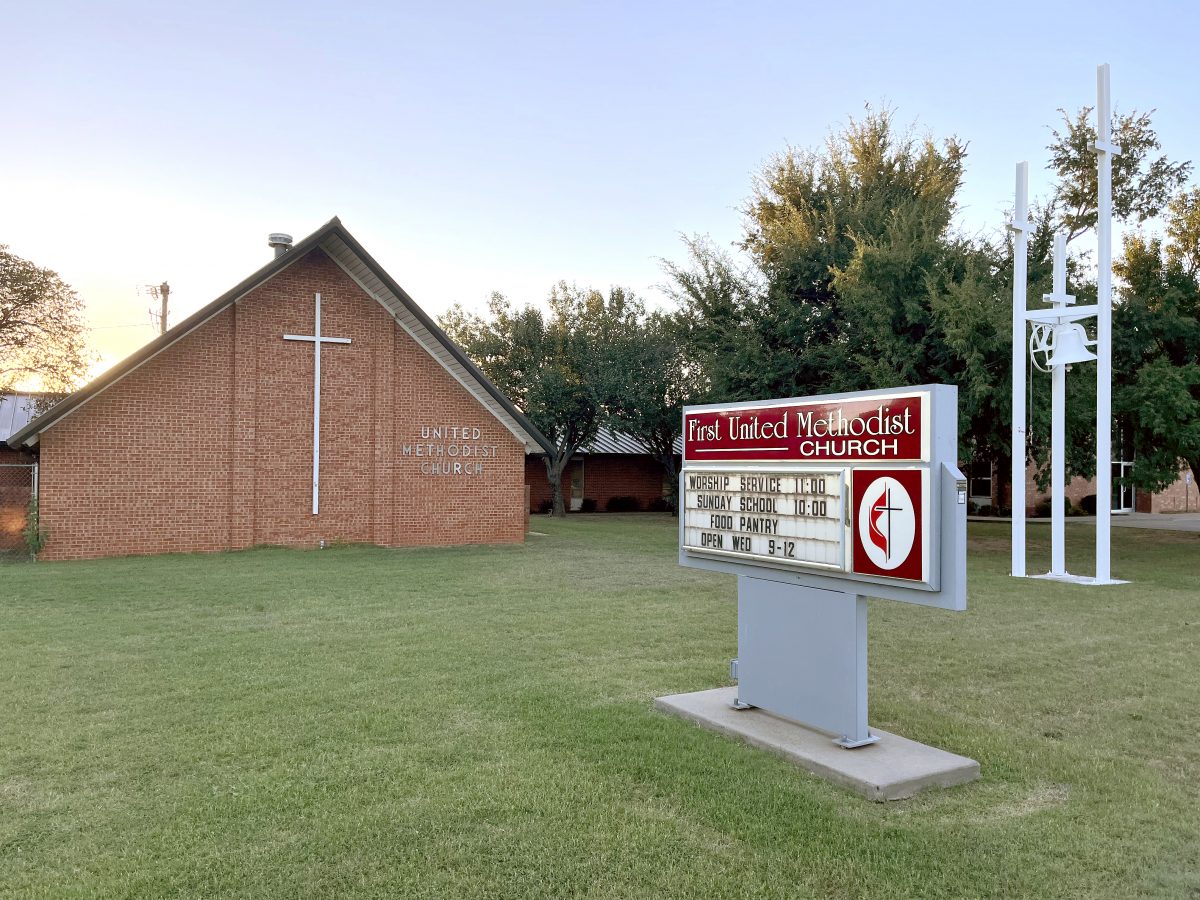 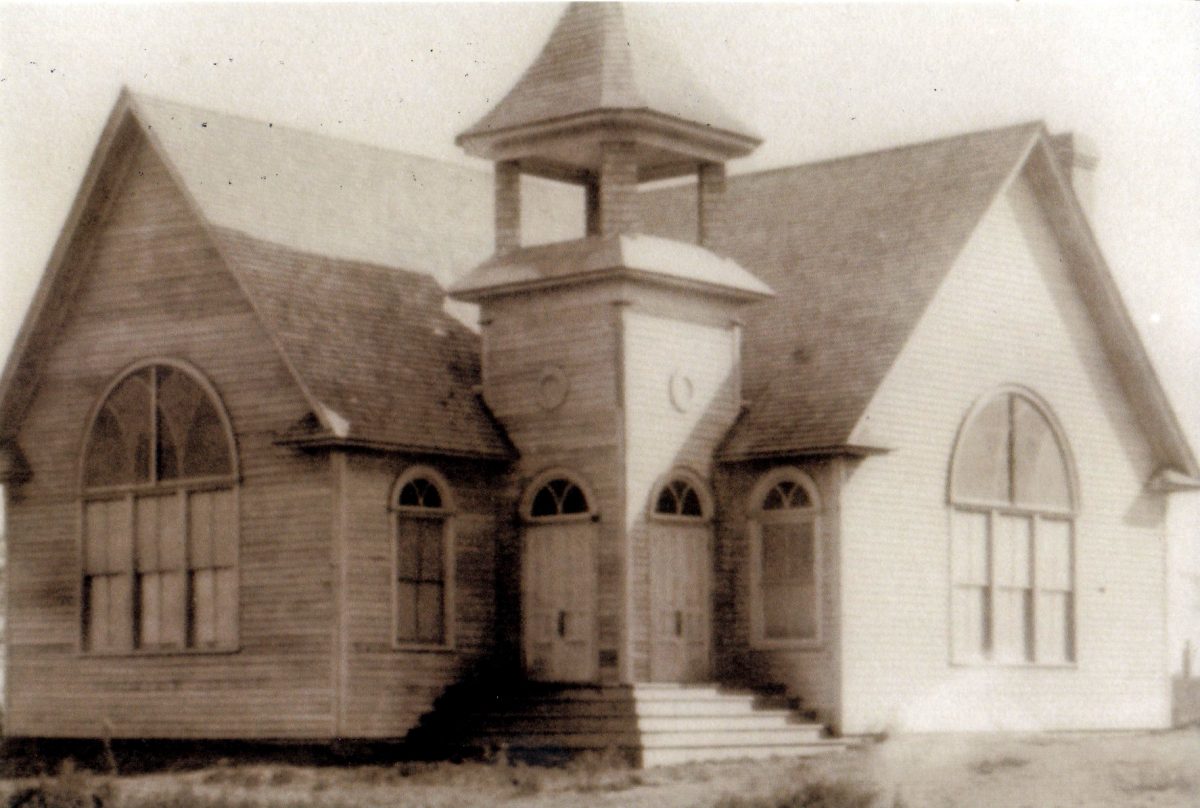