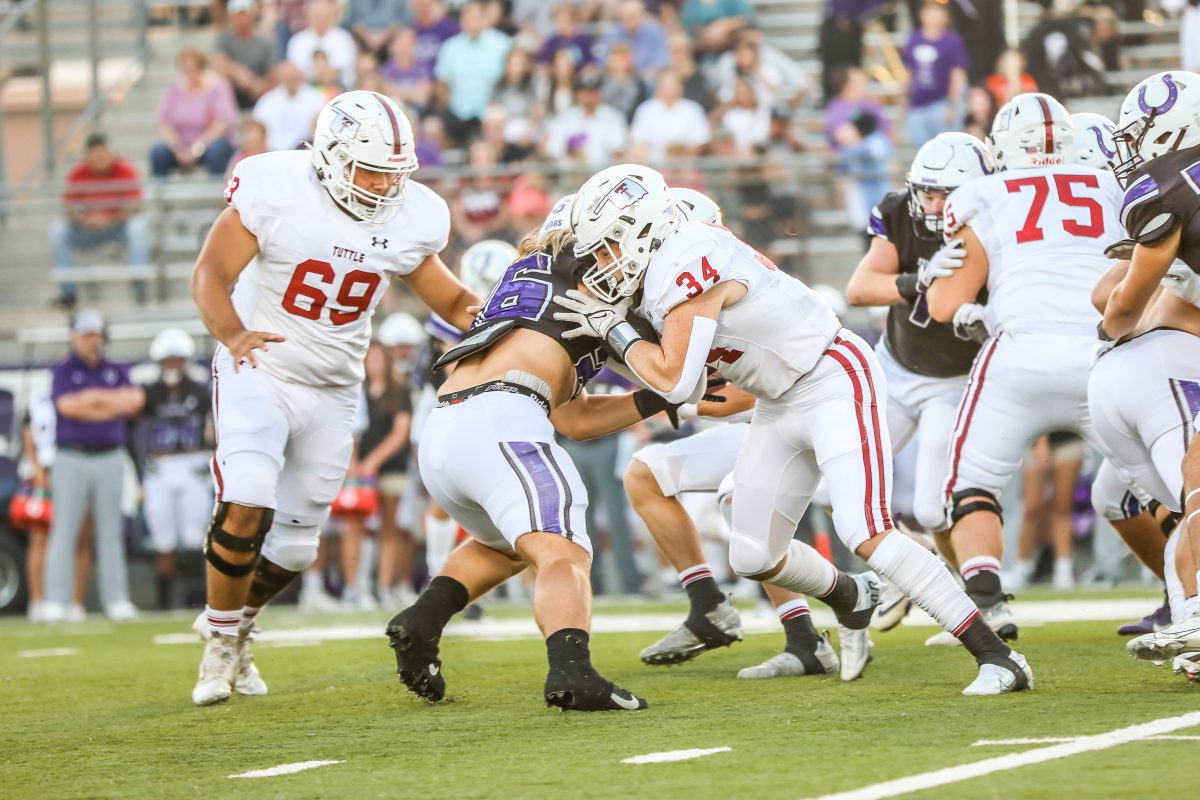 The Tuttle Tigers faced the Bronchos in Bethany for each team’s first district matchup Friday. Tuttle drove up a big lead early on. Bethany stayed vigilant and voracious down to the last minute, but the Tigers ultimately won 40-34, and will play next in Harrah Friday at 7 p.m.

“I’m proud of the kids,” Coach Ballard said. “They fought hard. We came out and ran the ball a little better than we did a week ago and that was exciting. McAdoo breaks the big one on the first play we had, and the line blocked it clean. There was only one guy that could even touch him and he made him miss. The linemen did a great job blocking that one up and down. We get out to a two-score lead again, like we did the week before, and we were able to hang on this time. The kids did a good job of answering when Bethany did do something well. We had a couple of errors here and there. We give up an onside kick, which was a big momentum turner as much as anything. We were up two scores at the time, but they made us sweat a little bit longer, so we just never could quite put them away where you could ever relax.” 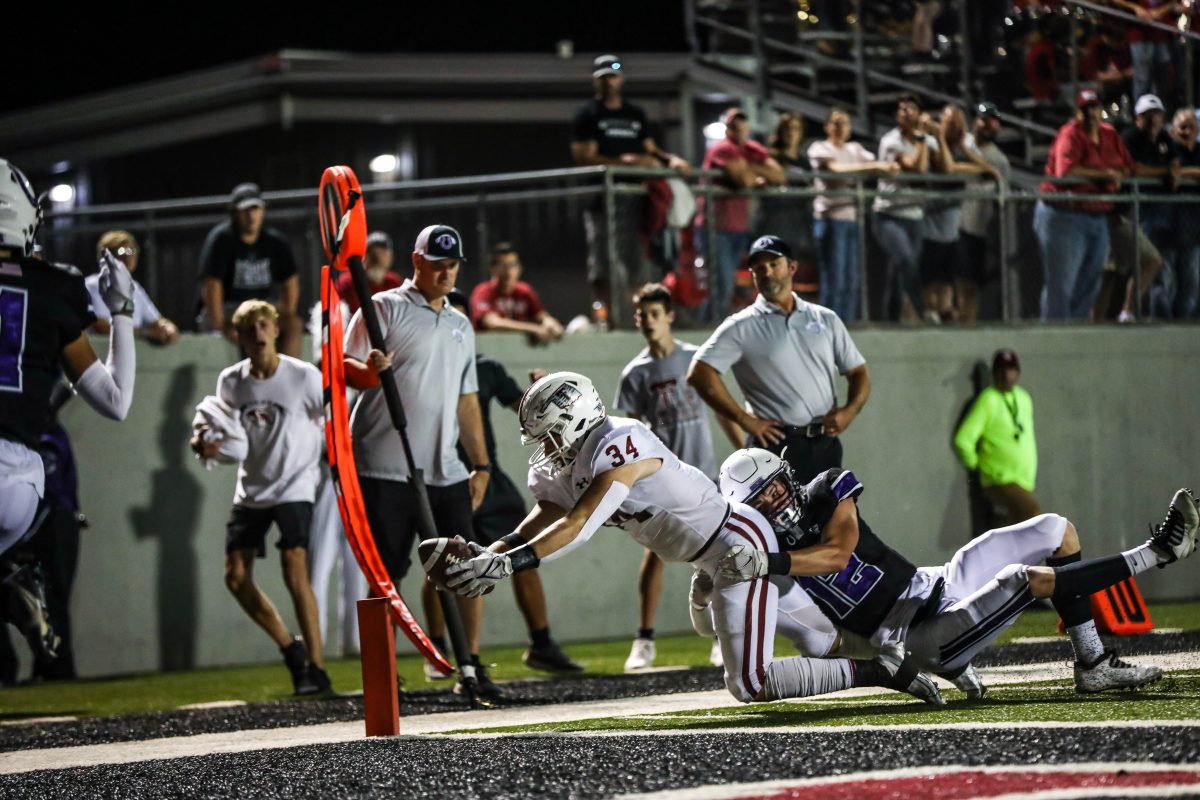 Tuttle scored on their first play from scrimmage, an 80-yard run by sophomore Brady McAdoo, to take an early 6-0 lead in the first quarter.

Tuttle forced Bethany to punt on the next drive, and then Bethany forced Tuttle to punt. Tuttle’s first punt of the game forced Bethany to take over from their own one-yard line. On fourth-and-2, at their own 8-yard line, Bethany punted, but the ball thudded off a blocker’s back. Tuttle senior Jake Tucker scooped the ball up at about the eight-yard line, and broke the plane with the football, but the play was called dead at the one. Tuttle senior quarterback Mason Dennis ran it in for a 13-0 Tuttle lead with 1:03 left in the first.

Eight of the game’s 11 touchdowns came in the second and third quarters. 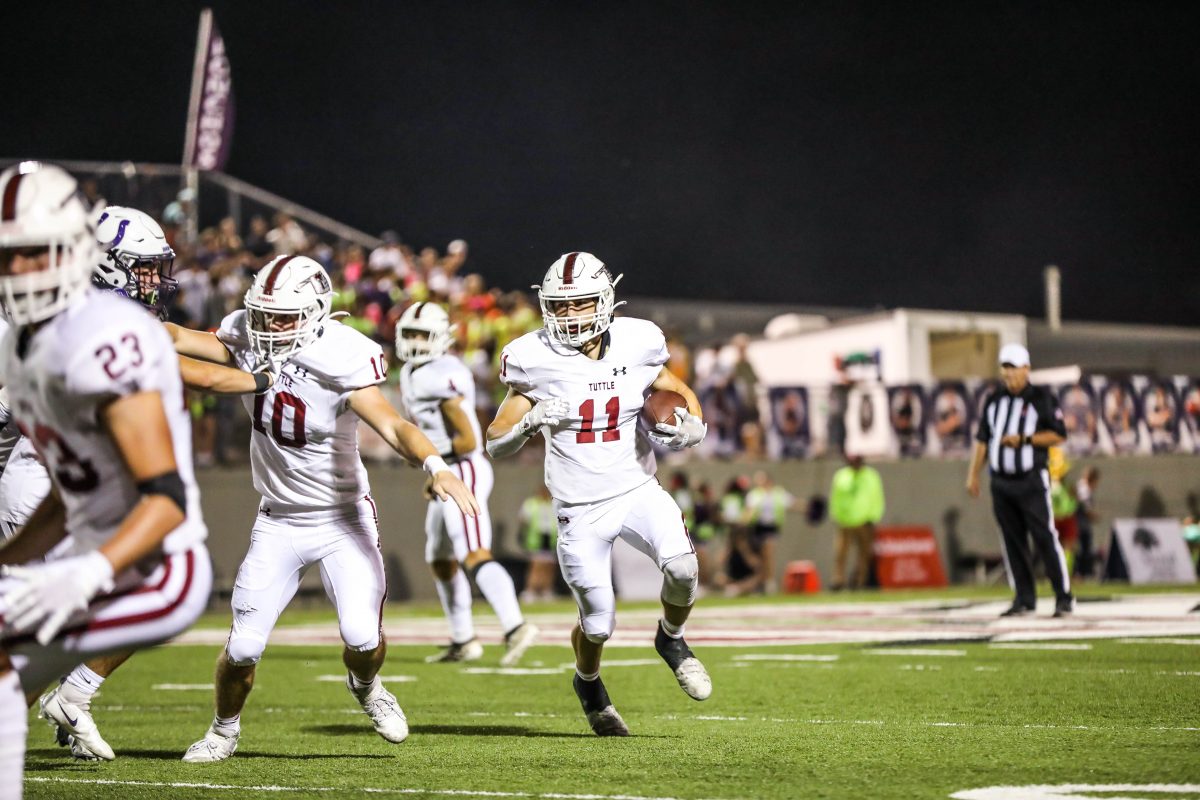 Bethany put their first points on the board with about nine minutes left in the second quarter, capping off a balanced, efficient drive.

The Tigers ran McAdoo for a conversion before Dennis hit him with a 49-yard touchdown pass to give Tuttle a 20-7 lead with 6:50 left in the second.

After getting the ball back, Bethany ran the ball for two conversions, but scored on a 33-yard pass. 20-13

The teams traded punts again and Tuttle started their next scoring drive at their own 31-yard line. Dennis completed a pass to senior wideout Weston Grounds for 57 yards to put Tuttle in scoring position to the 12-yard line. On fourth-and-7 from nine yards out, Dennis completed his second touchdown pass to junior Mark Douglas. Tuttle led 27-13 with 28 seconds left in the first quarter.

With the final seconds of the second quarter ticking down, the Bronchos looked to pass, but Tuttle junior linebacker Joe Wright forced the Bethany quarterback out of the pocket for a short gain that sent the teams to halftime.

Tuttle kicked off to start the third quarter, but recovered a fumble at the Bronchos’ 32-yard line. With a short field to go, Tuttle chewed up some clock with their running game. With 8:30 left in the third quarter, Tuttle scored with a four-yard pass from Dennis to Mark Douglas to take a 34-14 lead. 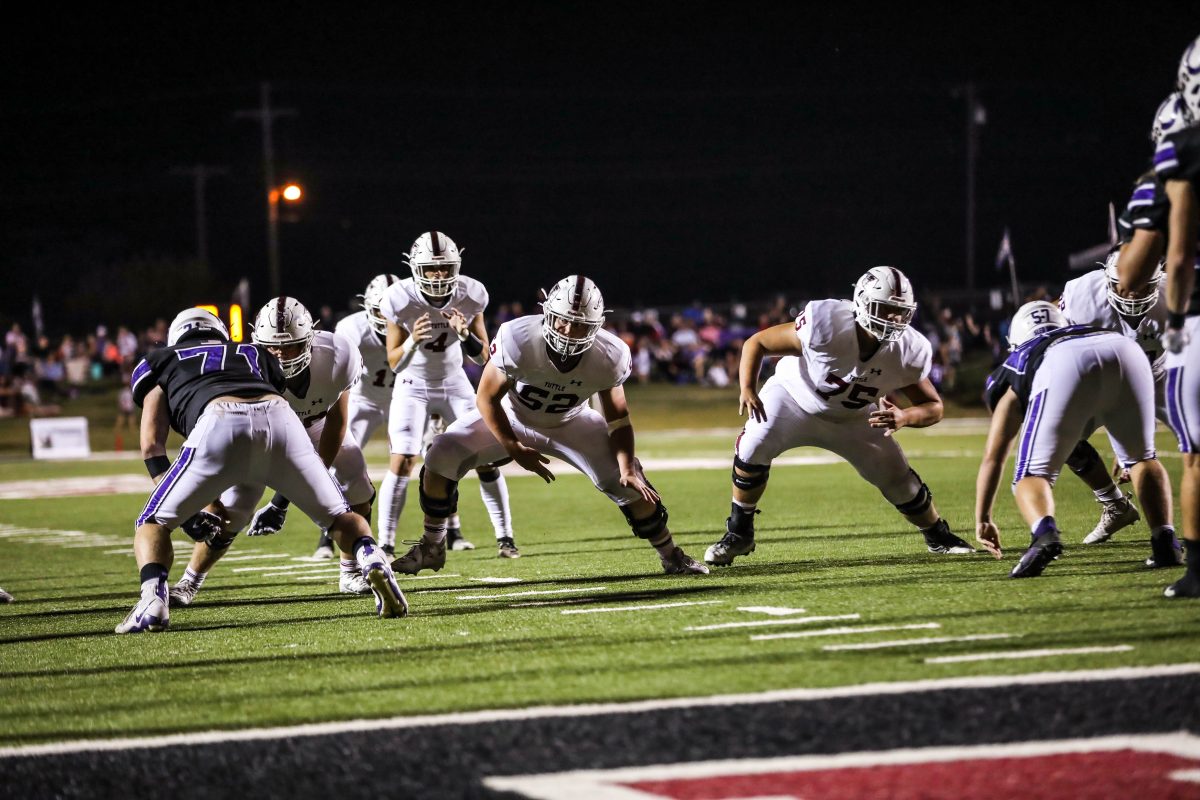 On the following possession, the Bethany quarterback was sacked on first down by Tuttle sophomore Adrian Avelar. The Bethany offense rebounded though, going the length of the field before scoring on a run from a yard out with 5:15 left in the third quarter. Bethany trailed 34-21.

On Tuttle’s following possession, they were held to third-and-8 at their own 34-yard line when Tuttle junior Noah McDoulett caught a pass from Dennis that McDoulett turned into a 38-yard gain into enemy territory at the 28-yard line. Douglas caught a pass for 11 yards to put the Tigers inside the red zone. Tuttle sophomore running back Luke Fallwell complimented the drive with a few bruising runs. Dennis finished the drive though with a three-yard rushing touchdown. Tuttle led 40-21 late in the third quarter. 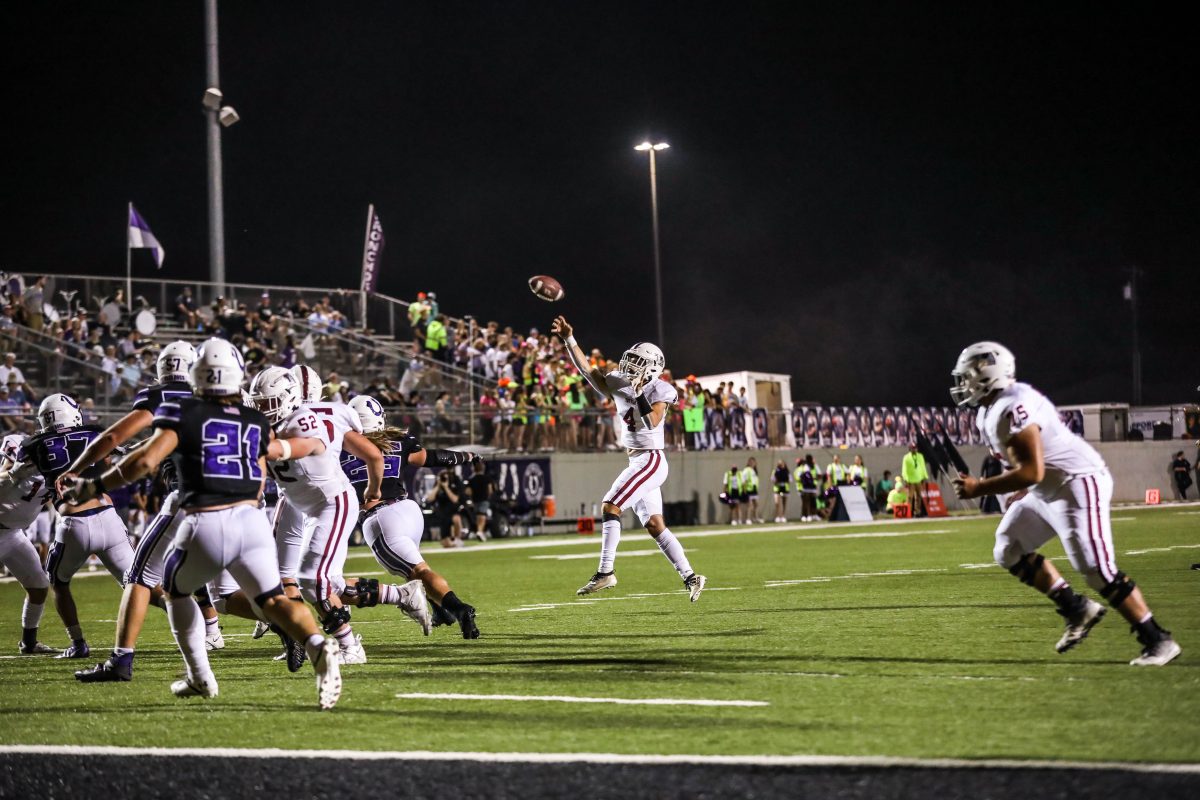 Bethany managed to score on a 16-yard rushing touchdown with 38 seconds left in the third quarter. Down 40-27, the Bronchos opted to kick onside and got the ball back about midfield.

Hitting short out-routes and curls, Bethany converted their way down the field, and finished the game’s last scoring drive with a two-yard run. Bethany trailed 40-34 with 10:20 left in the fourth quarter. 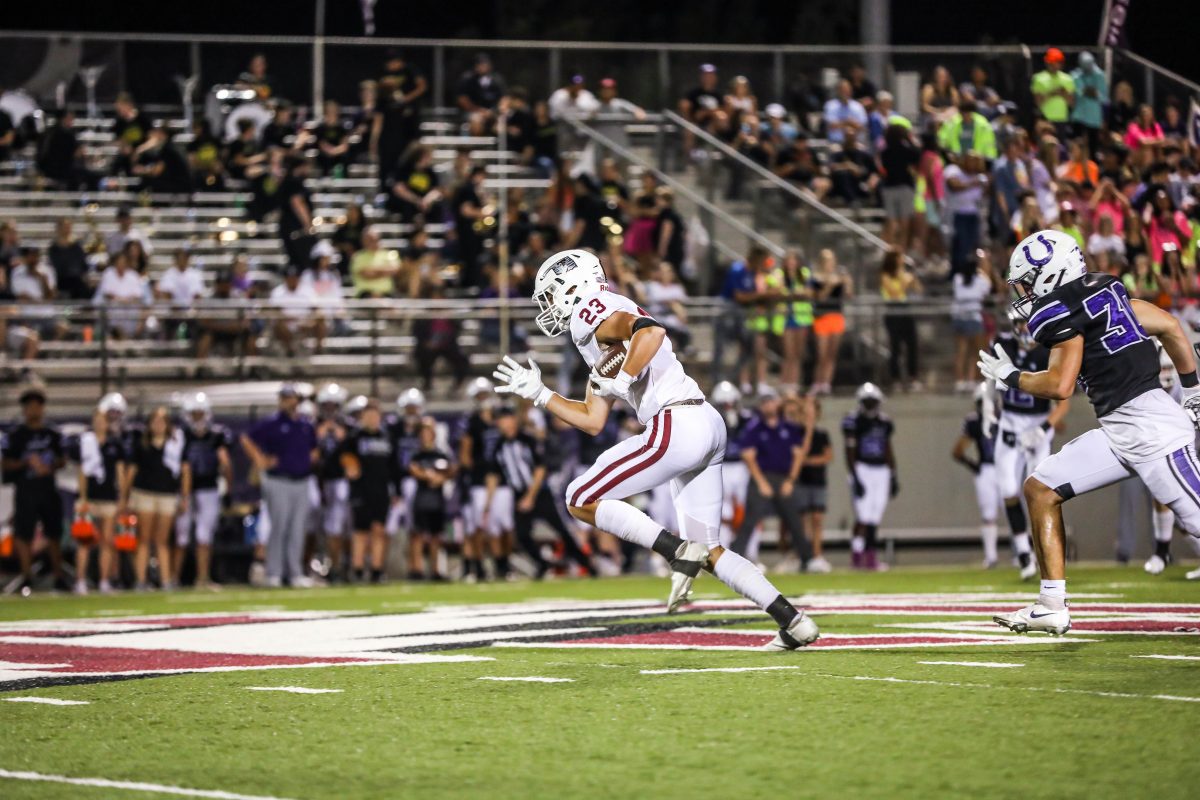 Tuttle had to punt on their following possession and Bethany had a shot to win it with 8:46 left in the game and 71 yards to go.

Tuttle defensive linemen Austin Neasbitt and Korbin Joslin brought the Bethany quarterback down to force third-and-20, but Bethany converted thanks to a short pass with just enough yards after the catch. Bethany’s quarterback continued completing short passes while under duress, but was sacked again by Wright to force a second-and-11. In at defensive back, Grounds forced a receiver out of bounds to force third-and-7. Avelar registered another sack seven yards back to force fourth-and-14. In a do-or-die situation for Bethany, the Bronchos threw a post route against single coverage, but Douglas deflected the pass to get the Tigers the ball back with just over three minutes left in the game. 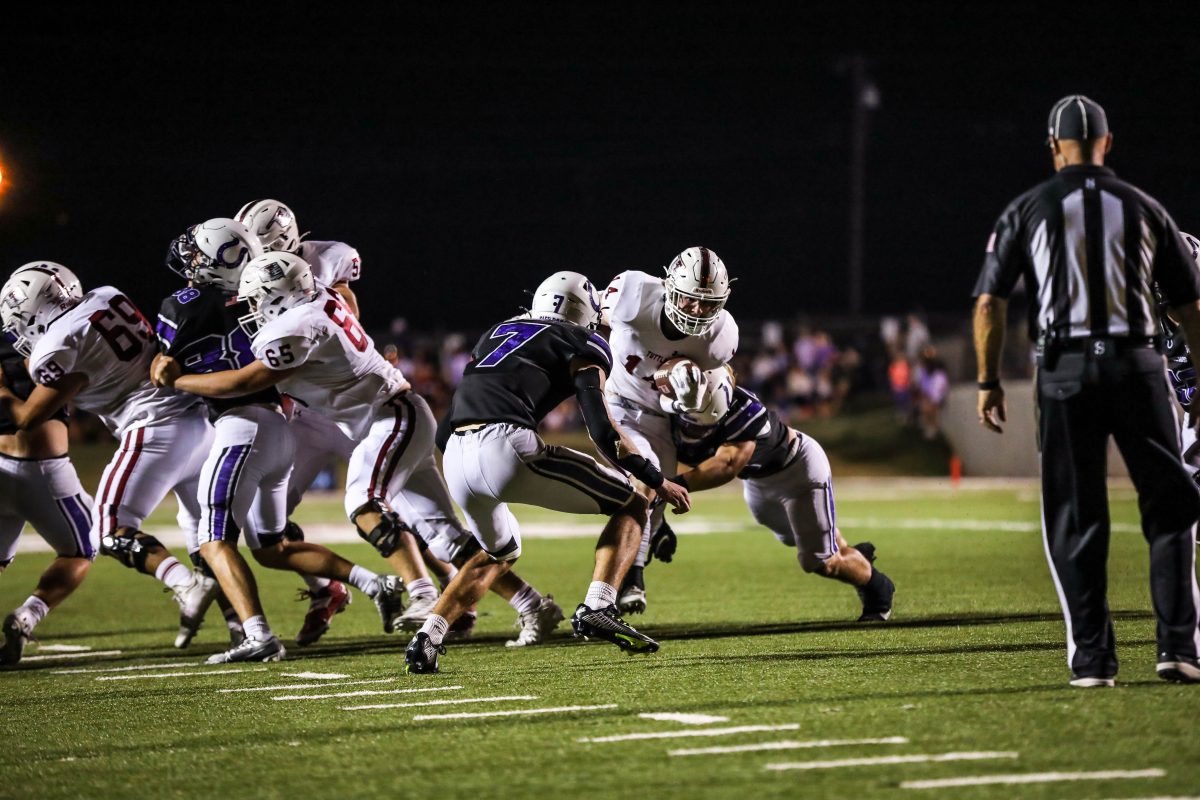 Tuttle converted once on a pass from Dennis to McDoulett on third-and-9, then Dennis converted again on a keeper, and the Tigers started taking knees with 1:32 left in the game.

“He’s making some good plays. I think he’s probably played his two best games of his career in a row here and he’s playing really good right now. He’s playing with some poise and making the throws when you need him to make some throws. The offensive line is doing a good job, keeping him off of his back as well.” 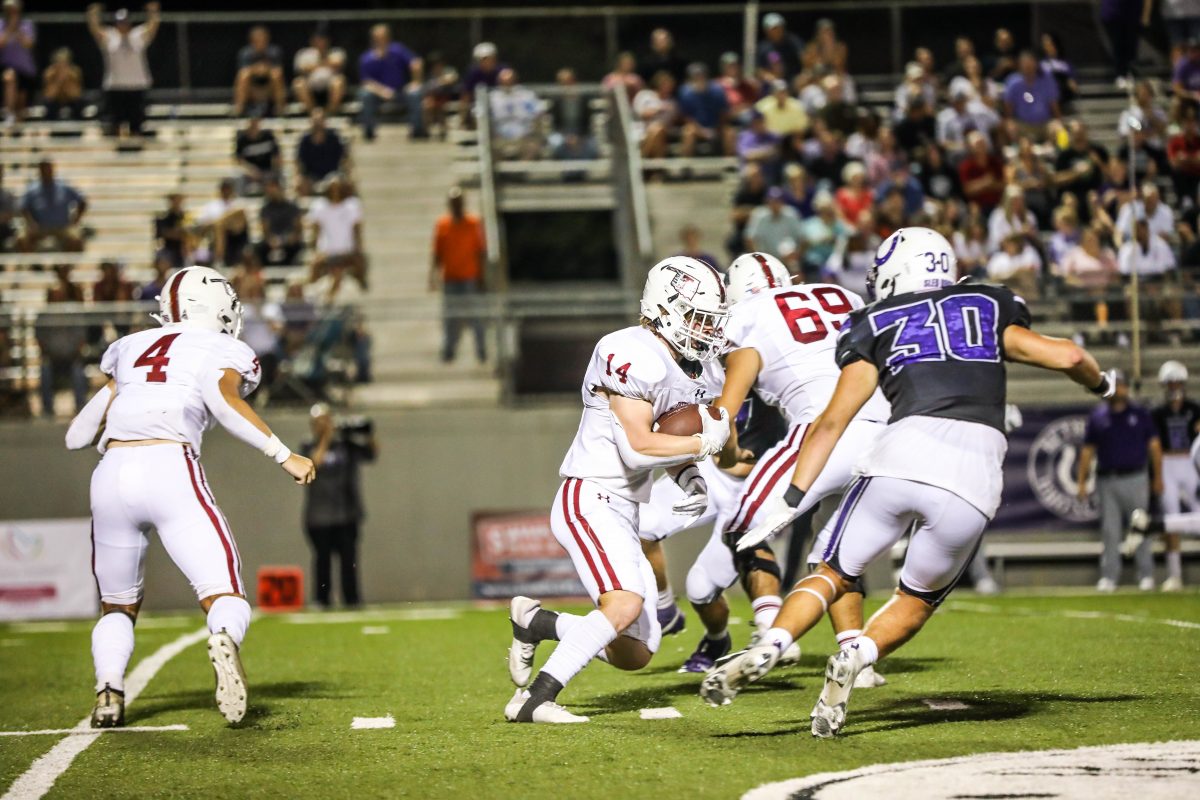 Bethany’s offense is loaded, complete with a pair of talented senior quarterbacks in six-foot-five Taylor Heim (7) and six-foot-two Cale Wetwiska (12). The two combined for 22/30 completions for 262 yards and two touchdowns. The Bronchos also rushed 33 times for 105 yards and three touchdowns.

“They are very, very good on offense,” Coach Ballard said. “He was deceivingly fast that number 7, a big tall guy. An NCAA coach told me that that kid ran a four-five at a camp this summer, so he can really run. He’s a good player. Just the number 7 creates matchup problems all over the place and then I really felt like the quarterback they brought in second, number 12, was very, very good as well. They’re running back was good too. They did their thing, we did our thing, and we won the football game on the road in our first district game versus a very, very good football team. We’ve played our last three games against extremely good offenses. Bethany is balanced with two quarterbacks that can help them go off, and they’re different from what Guthrie does, and both of them are completely different than what Noble did. I’m so happy for the kids and for the coaches, but we don’t get a whole lot of time to enjoy it. It’s time to get ready for the next one, and go to Harrah this week.”