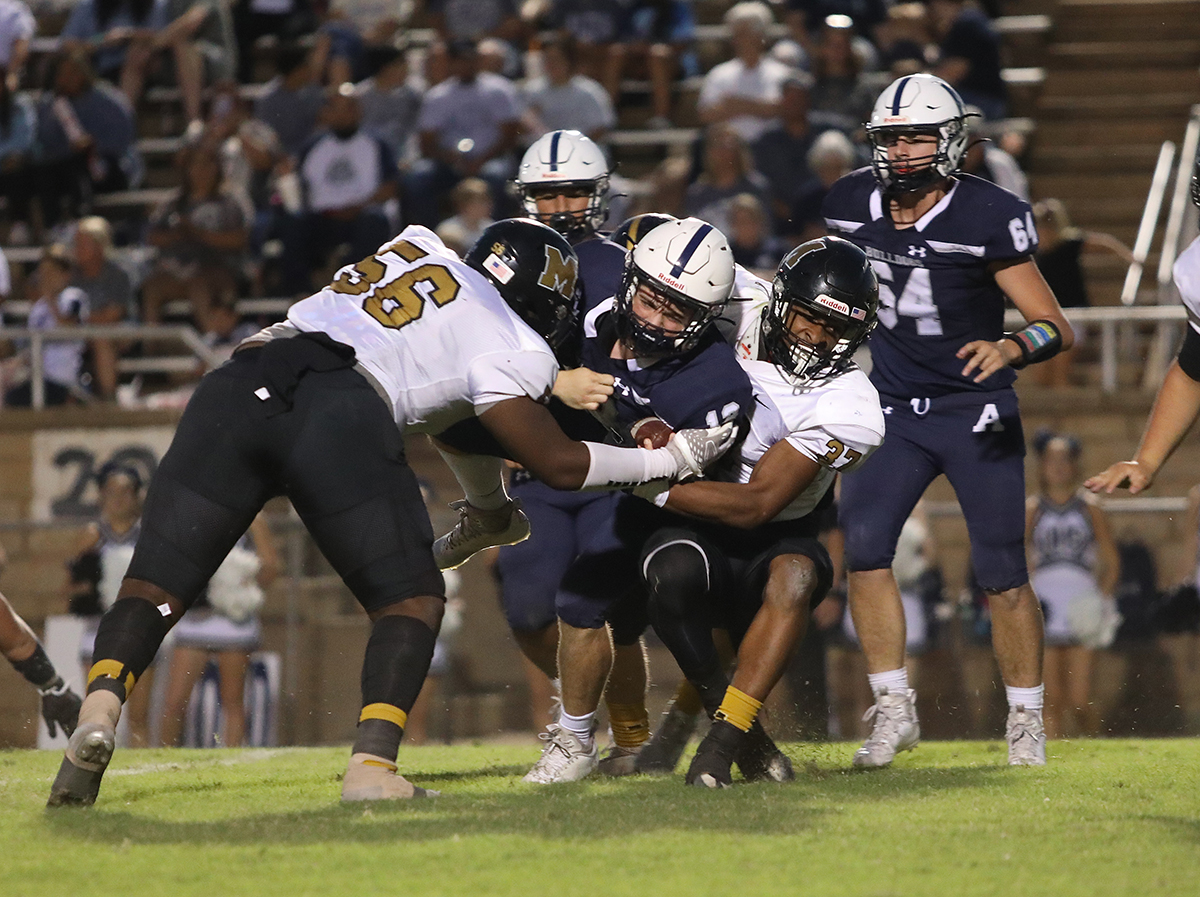 The Bombers ran a similar offense last year and their defense saw it every day in practice.

That experience came in handy Friday night as they shut down Altus’ triple-option attack in the district opener. Midwest City opened an early lead and held the Bulldogs in check in a 46-14 win.

“We played solid defense and really only caught once,” said Tyler Caid, defensive coordinator. “We told our scout team in practice to just run what we did last year. Our guys were familiar with the triple-option, so we got good looks all week in practice.”

Midwest City allowed only 152 yards and had one takeaway. They held Altus scoreless in the first half but gave up a couple of scores in the second half off miscues. Quarterback Garrett Gribble hit Brodie Rodgers for a 53-yard score on the first possession of the second half. It was the team’s only pass of the night. Gribble ran for the other score in the fourth quarter.

“We talked all week about not falling asleep especially when they get behind the chains and down and distance,” Caid said. “We knew at some point they’d try a quick shot with the tight end and our cornerback didn’t have good eyes on it and left the guy uncovered. We know better and it happens. And the other score we just had too many offsides penalties.”

The Bombers also had a big night offensively. They finished with 472 yards of total offense.

“I only had one touchdown last year and to have two in one game felt really good,” Broiles said.

Jalyn Woody had 7 carries for 65 yards and two touchdowns. Derrion Rodgers added 83 yards rushing and LaSiera LaViolette had 73 yards on 9 carries.
Midwest City took control early with 22 points in the first quarter. Irvin hit Broiles for a 35-yard score on the first drive. Irvin and Woody both ran for scores.

Altus got on the board on their first possession of the second half. The Bulldogs kept the ball on the ground the entire first half and caught the Bomber defense flat footed with their only pass of the night – a 52-yard score. That cut the Bombers lead to 22-7 with 10:20 in the third.

Midwest City answered with a pair of scores. Irvin broke a 36-yard touchdown run. A punt block by Kaleak Knighten gave the Bombers the ball near the Altus end zone. Irvin connected with Broiles for a touchdown on fourth-and-goal to make it a 38-7 score.

“We started out well but lost focus a bit in the second quarter,” Irvin said. “But got things fixed up and it feels like we’re getting all the pieces put together on offense.”

Altus scored on a quarterback sneak at the goal line.

Woody rounded out the scoring with a 9-yard score and a two-point conversion for a 46-14 final score.

The Bombers are back at home Friday night against Duncan. The Demons (0-4, 0-1) are coming off a 49-29 loss to Lawton MacArthur. They have allowed more than 50 points in three games this year. 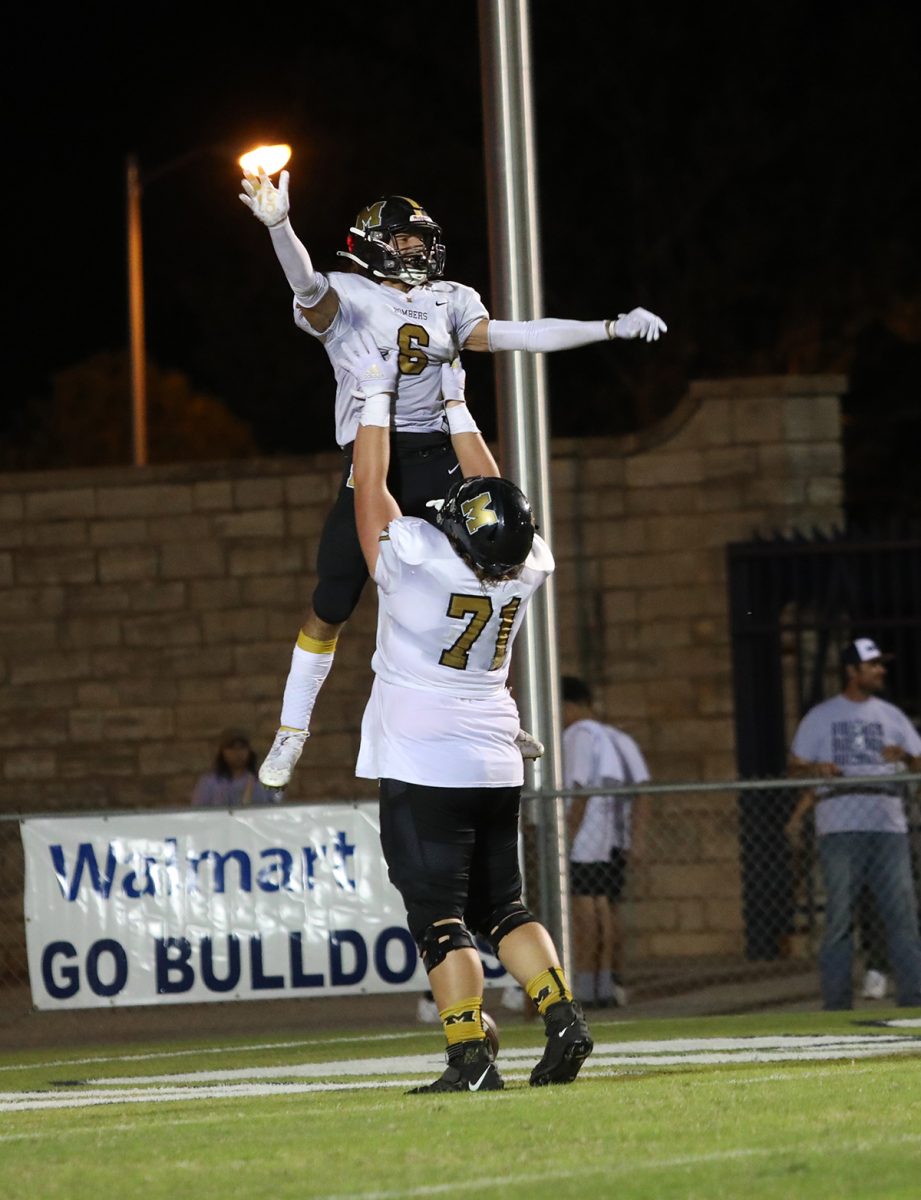 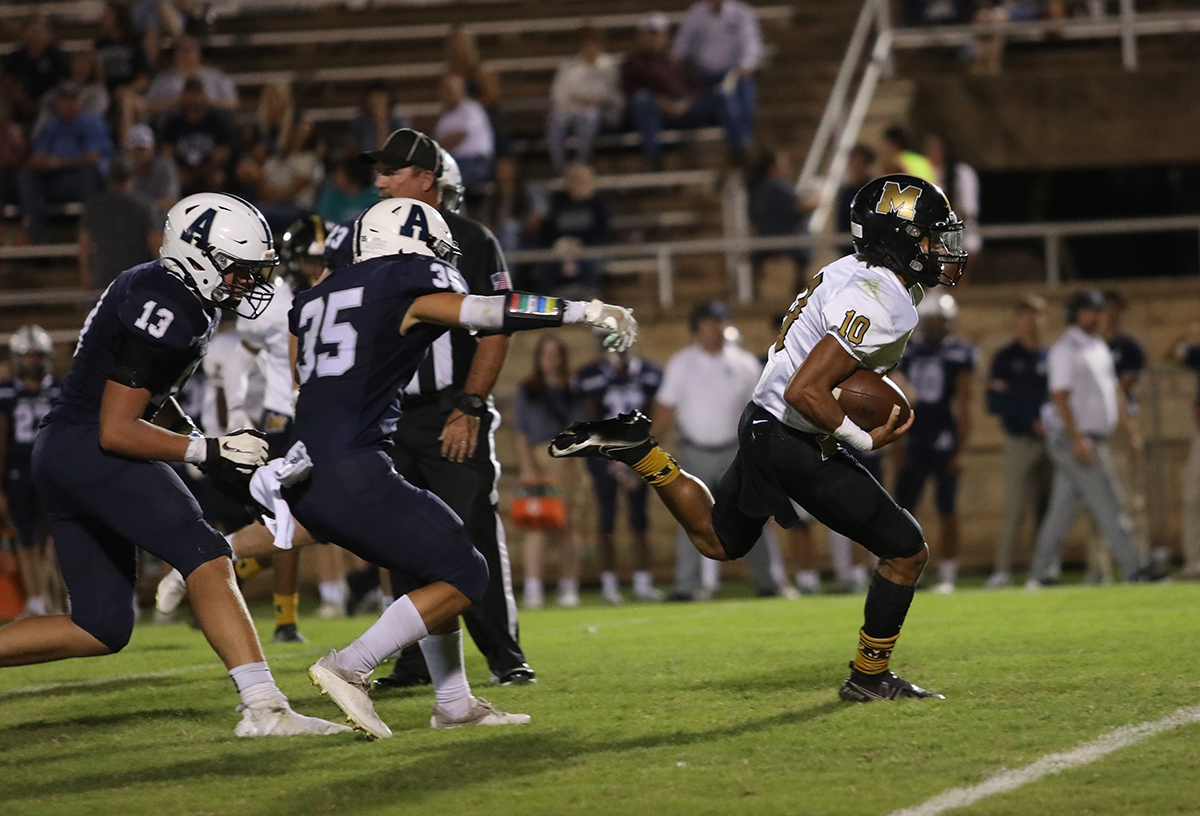 DeAngelo Irvin runs through a crowd of defenders. Photo by Jeff Harrison