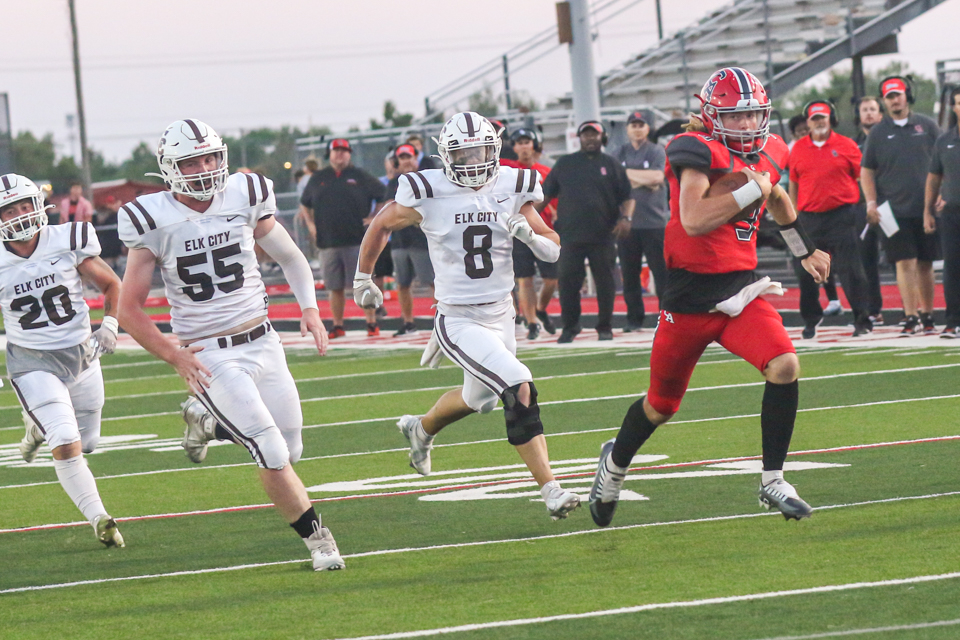 A rocky start turned out to be only a minor setback for Carl Albert in their district opener last week.

The Titans turned the ball over twice in the first quarter, but quickly got a handle on things in a 41-0 rout of Lawton Eisenhower last Thursday night at Cameron Stadium.

“We didn’t play very well in the first quarter on offense, but our defense and special teams really stepped up,” said coach Mike Dunn. “It very easily could have been a different score if we didn’t make some things happen.”

Senior Tashawn James scored on a kick return and had a receiving touchdown, and Xavier Robinson ran for two touchdowns in the win.
Carl Albert (3-2, 1-0) shined in all three phases of the game. The defense forced three turnovers and brought pressure on the Eagle quarterbacks. Cody Longstreet, Easton Harless and James each had an interception.

On special teams, the Titans scored a kick return for a touchdown and blocked a field goal. Kicker Ethan Spiwak hit two field goals and all five extra point attempts.

The offense recovered from the poor start to find the end zone four times. Robinson led the way with 172 yards rushing and two touchdowns on 14 carries. Sophomore Caden Davis had 67 yards rushing and one score.

Carl Albert scored on the opening possession of the game when Spiwak hit a 35-yard field goal. But they saw their next three end with a turnover on downs and two fumbles. Eisenhower (1-4, 0-1) couldn’t take advantage and had a field goal blocked.

“We were in a bad spot after that fumble deep in our territory but we just kept swinging and fighting,” Dunn said.

The Titans scored 17 points in the second quarter. Robinson scored on a 7-yard run and James took a short pass from Ferris and broke free for a 62-yard score. Spiwak added his second field goal for a 20-0 halftime lead.

A pair of big plays early in the third quarter put the game away. James returned a kickoff 90 yards for a touchdown and Robinson scored a 60-yard TD run in third quarter.

Davis added the Titans’ final score in the fourth quarter for the 41-0 final.

Carl Albert returns home Friday night for their homecoming game against Shawnee (0-4, 0-1). The Wolves are coming off a 63-14 loss to Bishop McGuinness last week in the district opener.

“Shawnee is a team scratching and clawing for a win and they can be dangerous,” Dunn said. “They have a really good running back and some nice players.”