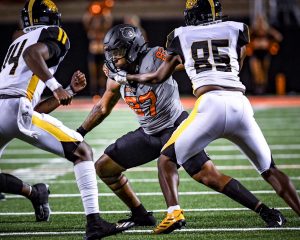 Oklahoma State University closed out non-conference play Sept. 17 against the University of Arkansas at Pine Bluff.

The Cowboys proved to soundly have the upper hand as the programs met for the first time in Stillwater.

The Cowboys put in 538 yards of offense in the lopsided victory, and the OSU defense was stout.

The Cowboys only gave up one touchdown as the visitors struggled to produce 230 yards on the night.

OSU racked up 63 tackles and nine were for a loss. The Cowboys added four sacks and a dozen QB hurries.

OSU’s defense was credited five pass breakups, and a pair of those came from a former Carl Albert Titan.

Choctaw’s DeSean Brown got some play time and was credited a solo tackle.

After winning three straight, all at Boone Pickens Stadium, the Cowboys secured a break this past weekend to prepare for No. 16 Baylor. Oct. 1 the Cowboys will take on Baylor in a rematch of last year’s conference title game that the Bears won in the final minute.

Four Big 12 teams are ranked and three others are receiving votes in the AP poll.

OSU head coach Mike Gundy says the Big 12 is looking stronger than ever, and competition will be fierce as conference play continues.

“You might have a team win this league that has two or three losses. You might this year, from what I’m seeing. There’s quality in this league and the competitive nature of playing road games, which are difficult,” said Gundy. “You’re just seeing a lot of teams that are about the same.” 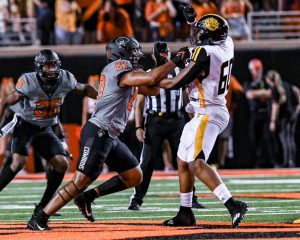