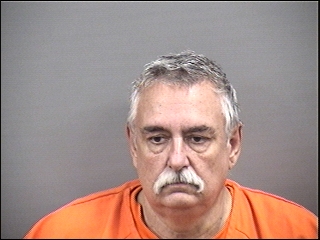 Bryan Lile, 61, is being held in the Grady County Law Enforcement Center without bond on six charges of Lewd Acts In The Presence Of A Child Under 12 and one charge of Rape By Instrumentation.

Law enforcement was initially notified by Lile’s wife after she walked in on Lile showing pornographic images to his granddaughter. The wife asked the little girl some questions, and discovered the mistreatment of the little girl happened on numerous occasions. After speaking with law enforcement and professionals with the Mary Abbott Children’s House, the little girl revealed many instances in which she was victimized by her grandfather.

“He had a Tuttle address, but I knew he didn’t live at that address anymore,” GCSO Lt. Phillip McCarthey said Monday, October 3. “I got to doing some digging and I found out he was a truck driver. I talked to his old landlord and he remembered what truck driving company he worked for. I looked them up, got a hold of one of their dispatch supervisors, and basically told him, ‘I know companies have a GPS device on most trucks, so I want to know where this guy’s truck is right now.’ I hear him typing a little bit, and then he said he was in Waco Texas, somewhere down in that area. I told him, ‘This guy’s got some serious felony warrants, and I need him in custody today. This guy needs to be off the street,’ and he said, ‘Whatever we can do, we’ll help you guys.”

Lile was in Texas on his way to Illinois. Lt. McCarthey and the truck company orchestrated an interaction with law enforcement that led to the suspect being taken into custody.

“I get on the phone with Lancaster Police Department and get them on board, send them a copy of the warrant and everything they need,” the deputy said. “It went down flawlessly.”