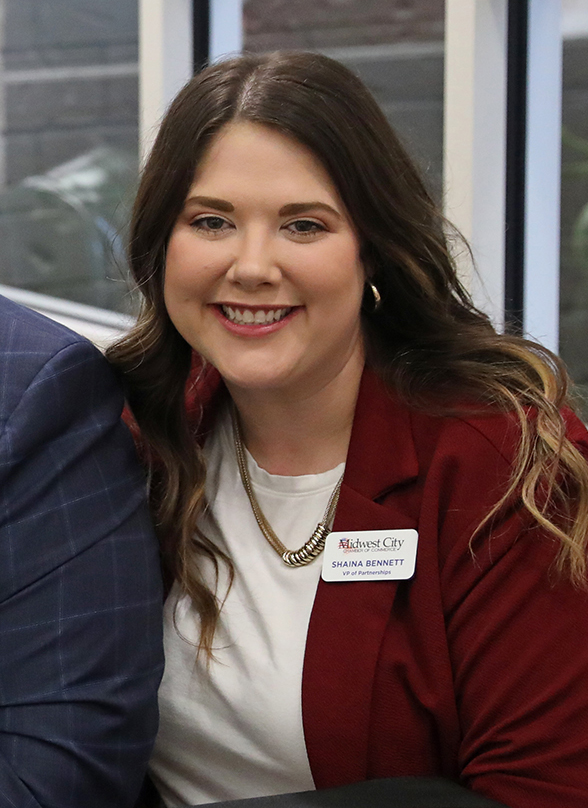 Shaina Bennett has been named as the new president of the Midwest City Chamber of Commerce. Photo by Jeff Harrison

The Midwest City Chamber of Commerce this week named Shaina Bennett as its new president. Bennett previously served as vice president of partnerships and interim president of the Chamber. The executive board of directors unanimously approved the promotion.

“Shaina has proven herself as an effective leader who is committed to Midwest City.  In addition, Shaina brings a valuable skill set which is critical to succeeding in this role – the ability to build strong relationships,” said Kimberlee Adams, Midwest City Chamber Board Chair.“I firmly believe Shaina possesses the ability and expertise, along with tremendous passion, energy and enthusiasm, to carry the chamber forward and build an even more impactful and successful organization.”

Bennett has been with the Midwest City Chamber since 2020 where she has served as the membership and marketing director and the vice president of partnerships.  In these roles Bennett organized and sourced funding for chamber events, managed growth strategies and chamber communications.  Bennett brings 15 years of hospitality and event planning experience to this role and is focused on leadership, customer service, business culture, board development and strategy.

“It is with great pleasure I accept the role as President of the Midwest City Chamber. It has been an honor to serve this community and believe that Midwest City is poised for further greatness,” said Bennett. “My goals for the Chamber are to strengthen our business network, promote community growth, and inspire others to lead.”

Bennett is originally from Biloxi Mississippi and a graduate of University of Central Oklahoma.