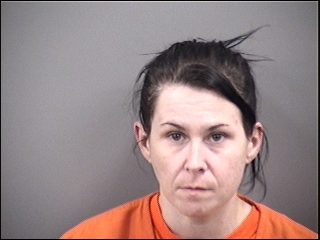 Upon arrival, the deputy made contact with the reporting party (RP). The RP told the deputy her truck had been stolen that day while she was at work. The RP last saw the vehicle at approximately 8:30 a.m. that morning.

When The RP came home from work, she found a note from Lacy written on a notebook saying she was sorry and that she had to leave and hoped that the RP would forgive her. The RP told the deputy Lacy was possibly headed to West Virginia because that’s where they were from.

After speaking with the RP, Deputy Jarrett called dispatch and asked them to enter the vehicle into NCIC (National Crime Information Center) as stolen and send out a BOLO (Be On the Look Out) to surrounding agencies.

At approximately 6:11 p.m. that day, the deputy received a call from dispatch stating the vehicle was equipped with OnStar and that OnStar had contacted them about the vehicle being stolen. OnStar stated the vehicle was on I-44 in the Springfield, Missouri area headed eastbound. OnStar contacted agencies in that area to notify them.

At approximately 7:40 p.m., dispatch contacted the deputy to let the deputy know Laclede County Sheriffs Office had stopped the vehicle on the Interstate and arrested Lacy. Lacy was driving the vehicle and was the vehicle’s sole occupant.

Deputy Jarrett spoke with Sergeant Jake Allen with Laclede County Sheriffs Office. Deputy Allen told Jarrett his dispatch had been contacted by OnStar and gave them the location of the vehicle. Sgt. Allen then got on the interstate and was able to locate the vehicle and get it stopped.

Sgt. Allen told Deputy Jarrett Lacy was arrested and would be charged with possession of a stolen vehlcle.

Dispatch contacted The RP and advised her the vehicle had been found and put her in contact with the arresting agency to get her vehicle back.

Harrison was transported back to Grady County by GCSO Lieutenant Phillip McCarthey. Harrison remains in the Grady County Law Enforcement Center on a $5,000 bond for Larceny of a Vehicle.