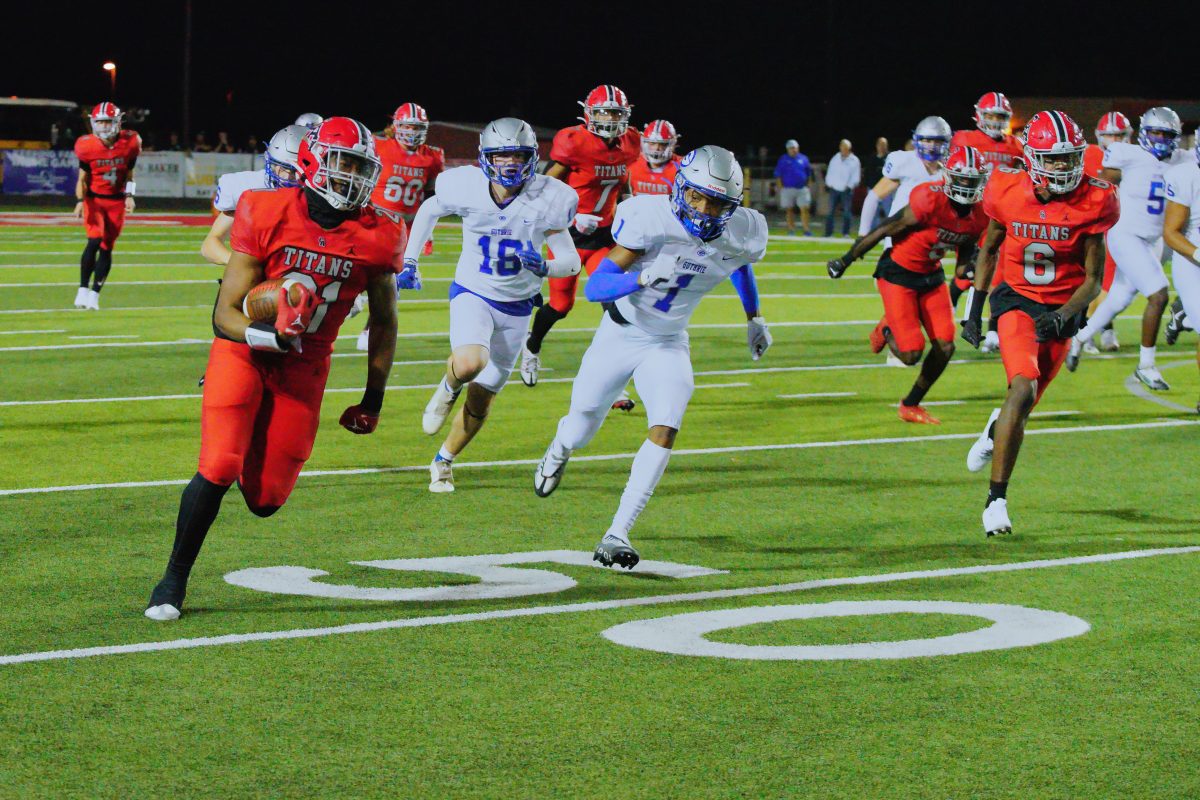 Reed DeQuasie could not be stopped.

The Carl Albert quarterback made it look easy in the Titans 41-7 victory against Guthrie on Friday night.

The Titans dominated through all phases of the contest. First, a 72-yard sprint down the right sideline caught the Bluejays’ defense off guard to open the scoring. Then a Guthrie punt three plays later brought the red-hot Titans offense back on the field and merely fueled the fire.

“Our coaches preached all week that we needed to be the more physical team because that was their plan, to come into this game, they were trying to run us over,” DeQuasie said. “So, when we came into this game, we kind of took that as a challenge. I feel like we really put it on them in the first half and they weren’t expecting it. I feel like that’s what opened up being able to run the ball so well.”

That looked to be the case from the get-go.

DeQuasie, and running back Xavier Robinson, knifed through the defense with ease before the starting quarterback darted around the defenders again late in the first quarter for another early score near the sideline.

As if the momentum needed a nudge to be fully on the Titans side, Guthrie failed to field the ensuing kickoff before Carl Albert’s special team’s coverage team closed the gap and recovered.

Carl Albert (7-2 Overall, 5-0 in district 5A-2) quickly capitalized again through a DeQuasie 8-yard run on the first play of the second quarter.

Carl Albert coach, Mike Dunn, talked about the impact having DeQuasie back on the field.

“He’s a competitor,” Dunn said. “He just brings us a spark. We’ve done a lot of good things running the football this year, and No. 21 is a pretty special player. And so, I think he takes a little bit off his play and makes us that much better in the run game because he can run, he can throw, he can beat you in a lot of different ways.”

“He’s a big spark,” Dunn said. “He’s a leader for our team and he fought his tail off to get back after having surgery week one. So, I’m just really proud of him.”
As for Guthrie (6-2, 2-2), the offense struggled to get going when it needed to. That didn’t help the comeback chances on the scoreboard look obtainable going into halftime trailing 31-0.

It didn’t get much better in the second half.

That largely is due to the sound play of the Titans’ defense. DeQuasie had high praise for thatunit’s performance rubbing off on the offense.

“It takes all the stress off the offense because you know that you have them, that (they) are confident that they can get a stop, and you don’t have to score every time,” DeQuasie said. “So, it helps us on offense to be more relaxed and calm.”

Dunn also seemed impressed by the defense. He called their performance“gutsy” against a stout offense in the matchup.

“Guthrie’s got a really good offense,” Dunn said. “They’ve got a quarterback that’s a playmaker and he’s a tough kid. They’ve got a running back that is a go-getter and a tough kid. They’re always going to play sound and they’re going to be disciplined. They play football the right way. And so, when you can go out and get stops and make it tough on them, that says a lot about our defense.”

The Titans have a bye this week and will wrap up the regular season Nov. 4 against Piedmont.