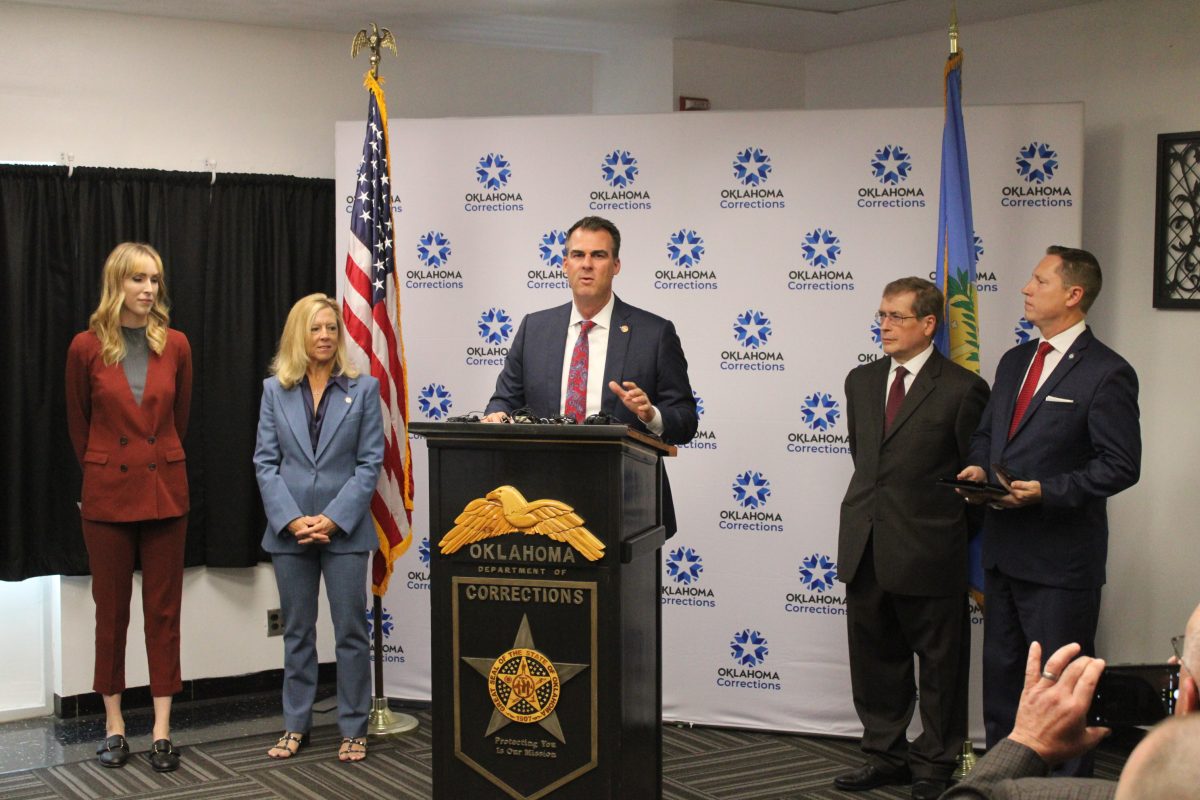 Gov. Kevin Stitt, Rep. Brian Hill and a large crowd convened around the Department of

Corrections facility for a monumental day for criminal justice in Oklahoma.

Following the signing of a bill impacting incarcerated individuals on Oct. 5, handshakes and pictures became the common theme at the DOC facility.

Doug Eckert and his wife Jennifer, who were at the signing, played a part in that process.

“For about five or six years, my wife and I have participated in a prison ministry called Kairos,”

Eckert said. “Kairos is an international organization. They serve in nine countries and 37 states. We love that opportunity. There are dozens of Kairos volunteers right here in the Mustang area.”

Jennifer Eckert also accepted a position with Prison Fellowship over the summer. It is the nation’s largest Christian organization dealing with incarceration, and works to restore America’s criminal justice system and those it affects. Currently, 11 employees live in Oklahoma and three of them live in Mustang.

What they assessed through their ministry came to fruition in the recent past for Doug Eckert.

At the beginning of the pandemic, Eckert lost his job at a small nonprofit organization he had been working at and chose to go back to school to finish his bachelor’s degree. In his final capstone paper, he wrote about employing individuals who are coming out of prison.

prison. Eckert put the thought on the backburner while he went and got a job, but the idea never left his mind.

The rest is history.

A dinner to remember

That next step came early in the spring of 2022 at a dinner with Hill and his wife.

“We started talking about a variety of issues, and in the process of that conversation I talked to him about that idea I had when I was writing that paper and his eyes just lit up,” Doug Eckert said. “He was like, ‘This makes sense. We should be able to do this.’”

Ahead of the conversation, Hill hadn’t really looked at how he could do criminal justice reform.

In fact, it hadn’t been on his radar at all, but responding to workforce gap and making sure companies have a prepared workforce (a focus of Hill’s) intersected with criminal justice reform, leading Hill to a realization.

“I realized that it is the same story,” Hill said. “When someone comes out of incarceration, we need to ensure that the barriers that were in the way previously to them being able to get a job that they studied and have been educated for, that once we do that, we are positioning individuals for success. Before, we didn’t provide those certificates (provided in the Sarah Stitt Act). That wasn’t something that we were required to do as a state. And so, it just wasn’t happening.”

Having that dinner with the Eckert’s helped Hill learn what they were seeing through Kairos ministry and other groups going in and working in the sector.

Following the dinner, Hill had an open house event that hosted community leaders working in the nonprofit sector, small businesses, and government, but who interact with and care about the issue of criminal justice reform. Hill believes there needs to be more of those conversations.

“I love what can happen when we as neighbors take time to sit down and talk about the things that concern us and that we see affecting our neighborhoods and our schools and our homes and our churches,” Hill said. “That dinner was a perfect example of that.”

For the past couple of years, Hill has worked on the idea of ensuring that when someone has served their time in prison they don’t recidivate.

That all started with the Sarah Stitt Act, which ensured those leaving incarceration would come out with necessary documents like certificates they earned when incarcerated. Hill mentioned plumbing, electrical, cosmetology and more. Other documents that were a part of the Sarah Stitt Act include resume, birth certificate, driver’s license or state ID, and Social Security card.

“That allowed them to be able to find employment, and to find housing which reduced their statistical chances of going back into incarceration,” Hill said.

From there, the work continued with House Bill 4369, which took the same system in place for good behavior inside the prison and duplicated it for those who came out of prison and were on parole.

Those who continued to operate in good behavior while obeying the law and maintaining employment could reduce their time on parole. Hill said that helps in workforce gap issues, something Hill has identified as one of his key focuses as a member of the Oklahoma House of Representatives.

“The other important part of that is it also saved taxpayer dollars by eliminating their option to remain in prison an extra six months coming out without being on parole,” Hill said. “It was really a two-edged sword that we were able to kind of move us forward as a state.”

Hill, Eckert and more were in attendance for Gov. Stitt’s bill signing of HB 4369 and the announcement of the restorative workforce initiative.

The announcement includes a variety of bills multiple legislators had worked on, as well as the Governor’s Office pitching in their time and effort in the matter. Hill said it addresses the reduction of recidivism and workforce gap, allowing potential employers to be able to interview individuals prior to their release through Department of Corrections channels.

“This is significant because this literally means that someone could leave prison on Day 1 with a job,” Hill said. “This, we know, will reduce recidivism. In fact, we also know that if someone has a solid paying job in the first 21 days of release, they’re 90% less likely to reoffend. That’s huge for our community because that’s saving money for each of us as taxpayers, it’s saving that $28,000-$32,000 per year that it’s costing to incarcerate someone, not to mention it is changing a life.”

“…These are huge wins for our state and also for our business community and for our neighborhoods, our schools, each of us as Oklahoma citizens,” Hill said.

Department of Corrections and Gov. Kevin Stitt play roles in the process

Prior to the passing of the Sarah Stitt Act, the state had required three things to provide incarcerated individuals when they were released from prison. Individuals were provided the clothes on their back, $50, and a bus or train ticket home.

None of those options addressed employment and how to get housing.

“If someone has the ability to go and get a job, I think that’s what we as Oklahomans want,” Hill said. “We know that we have a workforce gap. And so, when we were working with the Department of Corrections, they agreed that ‘hey, we could be better.’ And I loved their interaction because some of this was simply providing what we already had. I think that’s where good governance comes from, identifying how we can take what we already have and just implement it and make it better for the people.”

The documents were already available to the government, but the passing of legislation became a matter of making sure it was part of the package someone received when they come out of prison.

That’s all the better for Hill.

“This excites me,” Hill said. “I think it’s an opportunity for us to address a couple of issues with one solution.”

Hill said he, and other legislators working on the project, worked closely with Gov. Stitt’s office to make sure they were on board through each step the bill went through.

The same can be said for the District Attorney and the Department of Corrections who also provided insight along the way.

“There were so many different groups that saw the potential,” Hill said. “And I’m excited to say that Oklahoma is actually leading the way on a national basis in this area. This is, I believe, the type of legislation that we are going to see modeled in other states around the nation because it makes sense.”

Employers response to have influence on success?

Although the bill makes sense to Hill and others who moved forward with the legislation, it remains to be seen how the community businesses will utilize the potential employee pool added.

A real challenge could be employers being hesitant to hire incarcerated individuals.

“As an employer myself, I get that,” Hill said. “I think where this really fits, and some of the prime examples we’re seeing, is in the truck driving industry. We know right now that we have a massive gap in what industries need truck drivers and the volume of individuals who are trained CDL licensed and ready to go.”

Examples of women coming out of DOC and making successful money are there and part of that benefits the businesses. Providing those opportunities for people to get back on their feet following incarceration is essential to helping them contribute to communities.

B&H Construction chose to be a second-chance employer from the start. Donnie Beller of B&H Construction said they have relationships with people who vet individuals who they think will want to work well before the company employs them.

As part of employment, individuals must take drug tests, and abstain from no alcohol and gambling according to Beller. He said they do well in the conditions they are offered.

“We want to put them in an environment for them to thrive,” Beller said. “And so, we are doing that.”

The company also has a credit union, where individuals can get a small loan and go through 12 weeks of finances, along with marriage and basic needs of them living well.

“We’ve just done it with a few and just grew from there,” Beller said. “Right now, with the labor market as tight as it is, it’s kind of set us apart. We’ve grown 125 employees this past year, and it’s putting some of those (individuals) to work.”

Beller and the company have met with a local church, who asked what they could do to get these people out of prison and doing well. Beller’s response is simple.

Larry Andrews of 777 Roofing & Construction in Mustang has also had some success as an employer at a second chance company.

Individuals have to pass a drug test and pass background checks. They also have to be approved by the municipality they are in to receive solicitation permits allowing them to go door knock as sales representatives. Each municipality has their own guidelines, meaning those individuals could work in some places and not others.

Andrews said he is not opposed to hiring those who have been incarcerated.

“We’ve got a pretty stringent interview process,” Andrews said. “We’ve had actually some who’ve said it was the hardest interview they’ve ever gone through.”

The company does DISC assessments and other things roofing companies probably wouldn’t. That is not a deciding factor in hiring or firing individuals. Those assessments let Andrews know how to better communicate with the employees to become a better team.

Andrews also wrote the book “The Ride: A True Story Of Finding Freedom Behind Bars” talking about his experience, his journey and his business.

“Being able to give them a second chance, I’m all for that,” Andrews said.

Hill hopes many other businesses consider the second-chance initiative.

“I think it’s this is a big opportunity for us,” Hill said. “I really do. I think we can move our state forward in a couple of different areas through this initiative. And my hope is that employers across our state will look at potential areas that this meets a need for them. It doesn’t fix it for everybody, but if we can help a thousand companies and put a thousand people, this year, to work coming out of incarceration, we’re moving our state forward and we’re changing the narrative. I think that’s a win for all of us.”