Choctaw had another historic season come to an end last week at the Class 6A-II Championship. 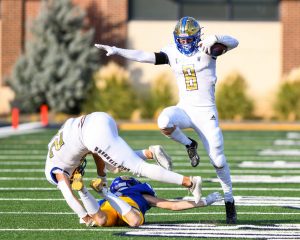 Will Smith blocks a Stillwater defender as Jax Smith advances in the Class 6A-II State Championship. (PHOTO BY LINDSAY TESIO)

For the second time in the last three years and third time ever, Choctaw High School made their way to the state championship football game.

After claiming the Class B State Championship in 1960, Choctaw suffered decades of growing pains as the program spent years competing among the state’s largest high schools.

Choctaw returned to the title game in 2020 when they Yellowjackets claimed the school’s first silver ball.

Choctaw rolled through district challengers and then playoff opposition to advance to the 2022 6A-II final last week.

The Yellowjackets ended up on the wrong side of a 26-21 decision Friday at the University of Central Oklahoma. Stillwater took home gold and completed an undefeated season good for their first state title since 1967.

The Yellowjackets have now made two appearances in the Class 6A-II final, and were less than a touchdown away from a state title in each contest.

This was Choctaw’s 19 trip to the postseason, and they’ve made the playoffs four seasons straight.

Choctaw’s program has made major improvements in recent years, and there’s much to celebrate as the team improved upon a growing tradition of setting new records almost weekly.

Not long ago a silver ball was a dream for the Jackets, but things have changed.

Choctaw expects to be the best, and coaches say they will keep working and will be bringing a gold ball home to Bill Jensen Field. 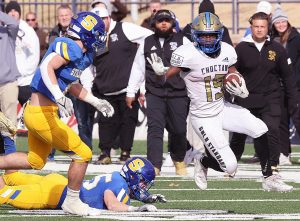 The Yellowjackets’ hopes for a gold ball came crashing down Friday afternoon at Chad Richison Stadium when top-ranked Stillwater capped an undefeated season with a 26-21 victory over No. 2 Choctaw.

Choctaw (11-2) was hoping to claim their first gold ball since 1960, but for the second time in the last three years the Jackets were less than a touchdown away from gold.

After making the state final for the third time ever, Choctaw had to settle for their second silver ball in the last three years.

Meanwhile, the Pioneers (13-0) claimed their first state title since 1967.

After a defensive battle and scoreless first quarter, La’Trell Ray put Choctaw on the board with a 2-yard run for six that capped a 10-play, 80-yard drive.

After taking the lead, Stillwater fired back making it 7-7 by halftime. In the second half Stillwater captured a 20-7 advantage.

The Jackets battled back and cut the deficit to 20-14 on Steele Wasel’s 6-yard TD pass to Jax Smith with 4:08 remaining.

However, Zac Tyson’s 6-yard TD run put the Pioneers out of reach with 1:12 left to play.

Pioneers recovered the ball near midfield. Gage Gundy took a knee and the Pioneers escaped up by five points.

“Not the outcome we wanted. I’m really proud of our kids. We had a great season and overcame a lot of adversity this season. The kids just kept finding a way to win, and we had a lot of guys step up at different spots,” said head coach Jake Corbin. “We had a great group of high character kids and they continued to get better throughout the year. I love being around them, and I’ll really miss being around this group.”

Choctaw produced 524 yards of offense, which was a 156 more than the Pioneers.

Choctaw out passed the Pioneers 281 yards to just 49. Wasel, an Akron commit, connected on 19 of 33 passes in his last outing as Choctaw’s QB. 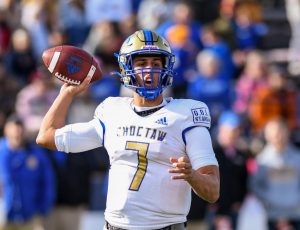 Senior QB Steele Wasel throws against Stillwater. The Akron commit passed for 281 yards and rushed for another 132 in the Class 6A-II final. (PHOTO BY LINDSAY TESIO)

Ray had 122 yards rushing on 20 carries, and added 98 yards on seven receptions.

Jax Smith had 72 yards receiving and a TD on just three catches.

Choctaw’s defense was swarming and netted 63 tackles, six for a loss and had two sacks on the day.

Costa, Besteda, Fittro and Will Smith all brought down ball carriers behind the line.

Fittro and Hubert were credited with pass breakups. 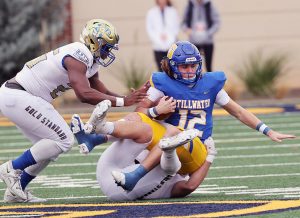 Turnovers and penalties plagued the Jackets’ bid for gold as they suffered a fumble and three interceptions on the day. Officials took 135 yards from Choctaw with 16 flags, while Stillwater had just four penalties for a total of 30 yards.

“Obviously, we wish we could have finished, but sometimes you don’t play your best and I feel like, unfortunately, today was one of those days,” said Corbin. “We had some great things happen, but unfortunately mistakes compounded at the end and it made it difficult to get a win.”

Choctaw has much to celebrate after qualifying for the state final for just the third time in school history, and claiming two silver balls in the last three years.

However, disappointment was obvious after time expired Friday as the program had full intentions of claiming a second gold ball and solidifying their reputation as the state’s “Gold Standard.”

Choctaw will continue their quest for gold when they reload for the 2023 season.

“You have to be here to win it, and we will. We’ll get it done,” said Corbin. 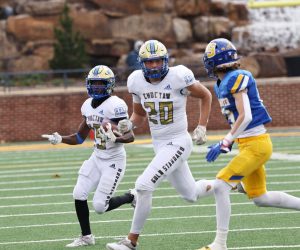