Shayd Akins, 26, is being held at the Grady County Law Enforcement Center in Chickasha, currently without bond, for Felony Pointing of a Firearm for an incident that occurred Friday, December 2 in Tuttle.
According to Tuttle Detective Shana Berryhill’s official arrest report, a Tuttle woman went to the police department and made a report of a road rage incident that had just occurred.
The woman advised while driving westbound on East Highway 37, an older model car started honking its horn at her, and the driver flipped her off as he passed her in the slow lane.
The alleged victim took a picture of the vehicle and its tag with her cell phone, and said she continued driving, turning south onto Southeast Second Street to go to Tony’s Car Wash, located at 3 Southeast Second, when she saw the same car again. 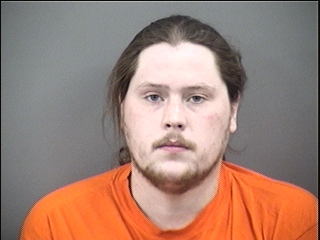 The woman said the driver of the vehicle rolled his window down and began yelling and cussing at her, calling her obscene names, such as “f****** b****” and “c***” and asked her if she wanted him to shoot her.
At that time, he pulled a pistol into her view and pointed it at her head while continuing to yell at her. The woman said she saw and heard Akins pull the slide back and he yelled at her, “I’ll shoot you in the f****** face.”
The woman said she yelled back at him to stop, that she just wanted to wash her car, and he drove away. The woman provided a description of the suspect and a statement, and the picture of the car. Detective Berryhill said in her affidavit, “Through my research on the tag number, I was able to identify a possible suspect. I created a photo line up that included five random photos with the same parameters as the suspect, as well as a photo of the suspect. All pictures were book-in photos from the Grady County Jail, and the line-up was generated using the police department’s photo line-up generator.”
The following Thursday, the woman went to the Tuttle PD where Tuttle Police Officer Clayton Lemon presented her with the photo line-up. She selected the photo of the suspect, Shayd Akins, and said she recognized him as the driver of the vehicle and the person that pointed a gun at her, threatening to shoot her in the face on December 2, 2022.