PJ Kerr shows off her ring and medal after winning her bracket at the United States Junior Open Championship in Oklahoma City over the weekend. 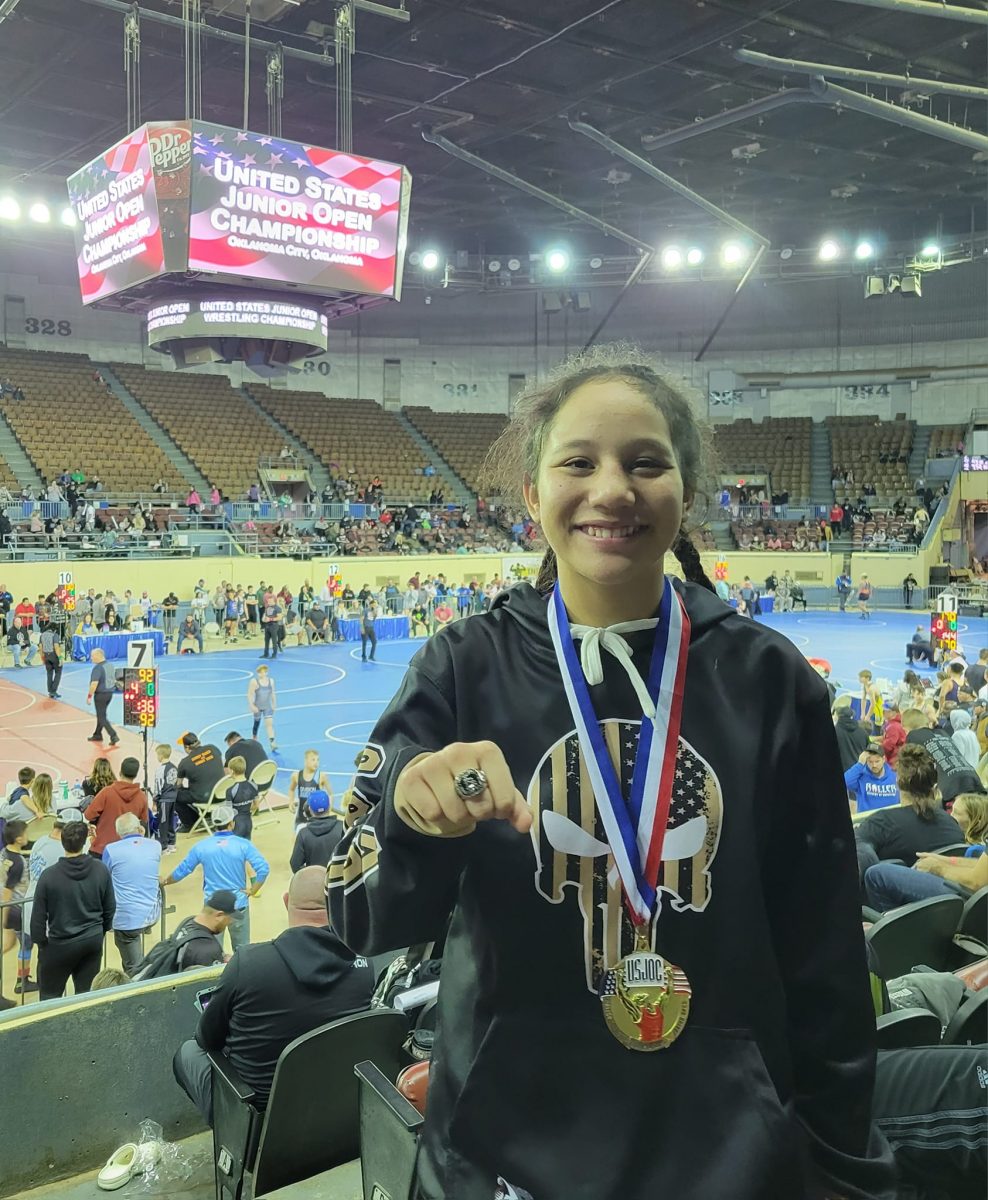 Kasia Wong is pictured with her medal and ring for winning her weight class at the United States Junior Open Championship in Oklahoma City over the weekend.

By Jayson Knight
Dozens of Tuttle wrestlers competed at the United States Junior Open Championship in Oklahoma City over the weekend.
Tuttle Wrestling Club Coach Josh Bryant had 44 Tuttle youth wrestlers competing at the USJOC.
PJ Kerr was one of four Tuttle kids who won gold in their division, and she was named the Outstanding Wrestler at the tournament.

“This girl is 100 percent all-in every time,” Coach Bryant said. “She doesn’t take any moments off. She always going 100 percent. She’s a gamer. When she shows up, she’  s ready to go, and she’s ready to wrestle, and when she puts her foot on that line, the other person on the other side is going to have a tough day. When she won that Outstanding Wrestler Award, there was nobody more fitting to receive that than her. PJ has an incredible family that is incredibly supportive of PJ doing all sports. She was a middle linebacker and outside linebacker for our football team that won the championship. She’s a great girl and I’m incredibly proud of her and she just took control of that weight class and dominated it.”
PJ said her favorite moment was, “when I pulled my first cradle. I got 3 back points off of it. I only gave up one point all tournament and ended each match with a pin. Then my mom started getting phone calls and texts saying they had just announced me as the most outstanding 9U wrestler. We were all yelling in excitement, my mom was crying and we were so happy.”
Three other young lady Tuttle wrestlers won gold as well.
Tuttle middle schooler Kasia Wong wrestles at Prodigy Elite Wrestling.
Prodigy Head Coach Matt Goucher said Sunday of Kasia’s performance at USJOC, “She was a champion. She did really well. She had a pretty tough bracket. She pinned her way all the way through the bracket. She’s a hard worker in the wrestling room. It doesn’t matter who we put on her, boy or girl, bigger girl, bigger boy, she doesn’t back down. You hope your athletes go out there and compete like they train, and you never know, but do I think anybody’s ever going to beat her? Probably not. In my mind, she could go as far as she wants to go. She works hard in the room, and it really translated to the competition this weekend. She rose to the occasion. She’s not only a great wrestler. She is an amazing young lady. She pushes everybody in the room, including me. She makes me run sprints with her. She’s an unbelievable girl on top of being an incredible wrestler.”
Another Tuttle young lady, Piper Norell, won first in her division for the girls, and for the boys.
“She wrestled in the boys and girls divisions and she ended up winning both of them,” Coach Bryant said, “and had a great match too. It was a barn burner, and she pulled it out.”
Hattie Foust was the other TWC girls champion, and her sister Viola Foust finished in sixth place in the 85-pound weight class.
“There’s two Foust girls, and they’re both pretty tough,” Coach Bryant said.
For the TWC boys, in their respective weight classes, Garet Woodworth took second place, Kross Martin took second, Aaron Delgado took fourth, Kinsler Branning took fourth, Cayson Delgado took sixth, Jagger Bryant took sixth, Bo Chase took sixth, Braxton Nix took sixth, Jaxon White took sixth, Reed Thompson took sixth, and Timothy Williams took sixth.
Going by team points, Tuttle won the 7U girls, out of 180 teams, and also took fourth in 9U girls.
“This is a national tournament,” Coach Bryant said of the USJOC, “so we saw kids from all over the country and Oklahoma, but it was all your big schools, your club teams like Prodigy. We take a lot of pride in that. I’m glad you brought that up, because we’re a school team. We just take in whoever wants to wrestle in town in Tuttle, and work with them from there. And so when you’re beating Oklahoma wrestling academies, and teams that travel a long way to compete, with teams that are comprised of just anybody who wants to wrestle for the city, that can be an uphill battle. We take a lot of pride in being able to compete against those teams.”
While Girls Wrestling was recently sanctioned by the Oklahoma Secondary Schools Activities Association, it’s still very much in its infancy. Performances like Tuttle kids had at USJOC shows that Tuttle could be at the pinnacle of girls wrestling as it continues to catch on.
Coach Bryant commented on the state of girls wrestling, saying, “There’s been a lot of progress in the last two or three years. When we started wrestling, when I started coaching it three years ago, we had two girls. Last year, we had six, and this year we had 27 sign up for Tuttle Wrestling. A ot of it comes down to the people of Tuttle. You got guys like BJ Jackson who’s an advocate for girls wrestling, and has the girls softball team that he helps coach, and we’ve been able to get some of them in the door to wrestling, just trying to see what it is. We have a lot of girls sign up and just come to practices and they are trying to get familiar with what wrestling is, and get comfortable with the sport. It’s been growing ever since about three years ago. There’s also been a lot of progress even in the high school area. We had Rayleigh Fisher come on, and she has performed well for the high school. Our junior high girls, that team is growing very rapidly. I can’t speak for everybody outside of Tuttle, but I know Tuttle really bought into the idea that there’s an opportunity here to get girls an opportunity to wrestle and we wanted to take advantage of that and put something out there for them.” 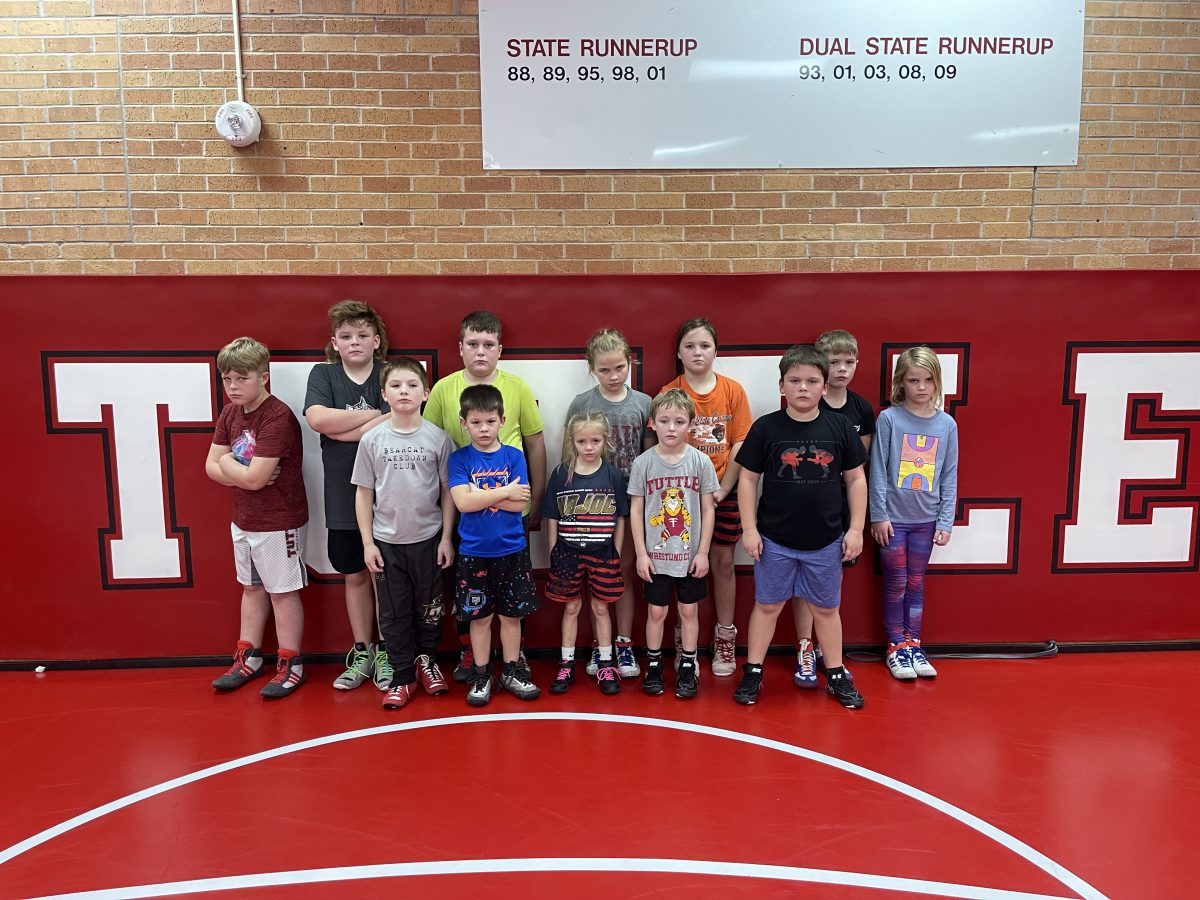 The Tuttle Wrestling Club’s placers at the United States Junior Open Championship in Oklahoma City over the weekend are pictured after a practice Monday.