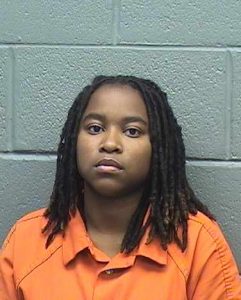 About 8:40 p.m., police officers responded to calls of shots fired at the park in the 1600 block of Spencer Road. Officers found 20-year-old Dejuan Mathew Shaw-Hudson dead of gunshot wounds sitting in the driver’s seat of a car, said Assistant Police Chief Sid Porter.

Witnesses told police that a dark colored Dodge Charger fled the scene after the shooting, as did several people on foot.

Shakevia Laprecious Jones, 19, was arrested shortly after during a traffic stop near NE 23rd and Spencer Rd. in a vehicle matching the description provided by witnesses. Jones was arrested for possession of marijuana and drug paraphernalia and taken to the Midwest City jail, Porter said.

Jones told police that she went to the park to buy marijuana from Shaw-Hudson. She said he pulled a gun on her and she shot him. Jones then gave the gun to an unknown person and fled the scene, Porter said.

Porter said Jones is currently being held in the Midwest City jail, but will be transferred to Oklahoma County Jail.