It was three years ago a Mustang woman decided to take her dream of expanding the city’s parks and make it a reality, in the process changing the face of recreational opportunities available to all area families.

Mustang Aquatic Center will again be the site of Mustang Parks Foundation’s annual summer party, set this year for Aug. 3.

Lynly Grider was that woman – with her Mustang Parks Foundation board, a partnership with city of Mustang and outreach efforts not only to area businesses and organizations but also educators, state and federal educators, the city’s first all-inclusive park recently celebrated its first birthday, with more projects set to come.

“We’ve been amazed at the outpouring of support for this playground – to say it’s been a huge success is an understatement,” Mustang City Manager Tim Rooney said recently. “We’re very proud of our partnership with the parks foundation and all that’s been accomplished in connection with that.”

As Brittany’s Play Adventure continues to evolve – with upgrades like fencing new landscaping and irrigation and an upcoming planned splash pad – Mustang Parks Foundation is set to mark both its third anniversary and the season with its summer party, set for Aug. 3.

Like the foundation itself, the celebration has grown since its first outing. Again held this year at Mustang Aquatic Center, the event will feature a movie on the water, as well as performances by Jonathan the Magician, the Mustang pom squad and more, Grider said.

“We wanted to make this fun for everyone – a time for our members to come together and for the community to get to know a little more what we do and what we want to accomplish,” Grider said.

New members are always welcome, with costs running $10 for individual and $100 for corporate memberships, Grider said. Those can be purchased at the Aug. 3 event or on the MPF website, she said.

“Members not only get free admission to the party – they also receive other benefits year-round like pre-sale event tickets and special parks and recreation event opportunities, as well as having the ability to vote on foundation business at our annual meeting,” Grider said.

The annual event is free to members; non-member cost is $3 per person and refreshments will be available at nominal cost. The summer party will begin at 6:30 p.m., and the movie – The Greatest Showman – is set to screen about dusk.

More information about Mustang Parks Foundation and its efforts can be found at https://www.mustangparksfoundation.com. 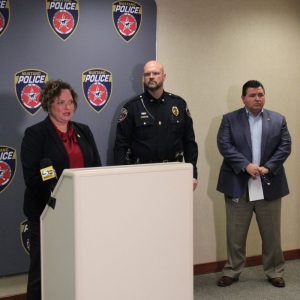