Mid-Del Schools is planning a bond election for early next year. And district leaders want to know what the public would like included in the proposal. 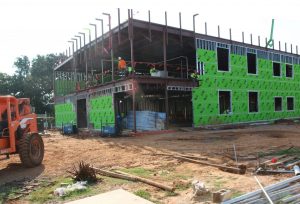 Crews work on construction of a classroom addition to Kerr Middle School in Del City. The project is part of a $130 million bond issue.

Superintendent Rick Cobb said he anticipates about a $10 million bond election that would be used to improve district facilities and supplement current projects in the 2017 bond issue. Any potential bond issue would likely be paid off within 6 years, similar to the most recent bond issue.

“While we’re making all of these improvements, we’ve seen more things that we want to improve,” Cobb said. “A $10 million bond issue doesn’t give us the same reach that $130 million does, but it would be a shame to not take the opportunity to improve the buildings and improve student life.”

Cobb said an example of those needs are at Monroney and Kerr middle schools, which will have a mix of new and existing buildings for next school year.

“We’re adding on to three middle schools, but some of the classrooms there still look like they did 40 or 50 years ago,” Cobb said.

Cobb said a bond proposal would not raise taxes. The district has additional bonding capacity due to economic development and increased valuations, Cobb said. School districts in the state are limited on how much money they can borrow based on property values within their geographic boundaries.

Mid-Del Schools is seeking feedback from employees for the bond election. District employees received an online survey on Sunday.

“So far, we’ve had more than 200 responses to the survey,” Cobb said. “I expect that we won’t be able to afford a lot of the things suggested, but we need to get it together and prioritize what is most important.”

Cobb hopes to present a bond proposal to the school board in December and put it on the ballot in February or March 2020.