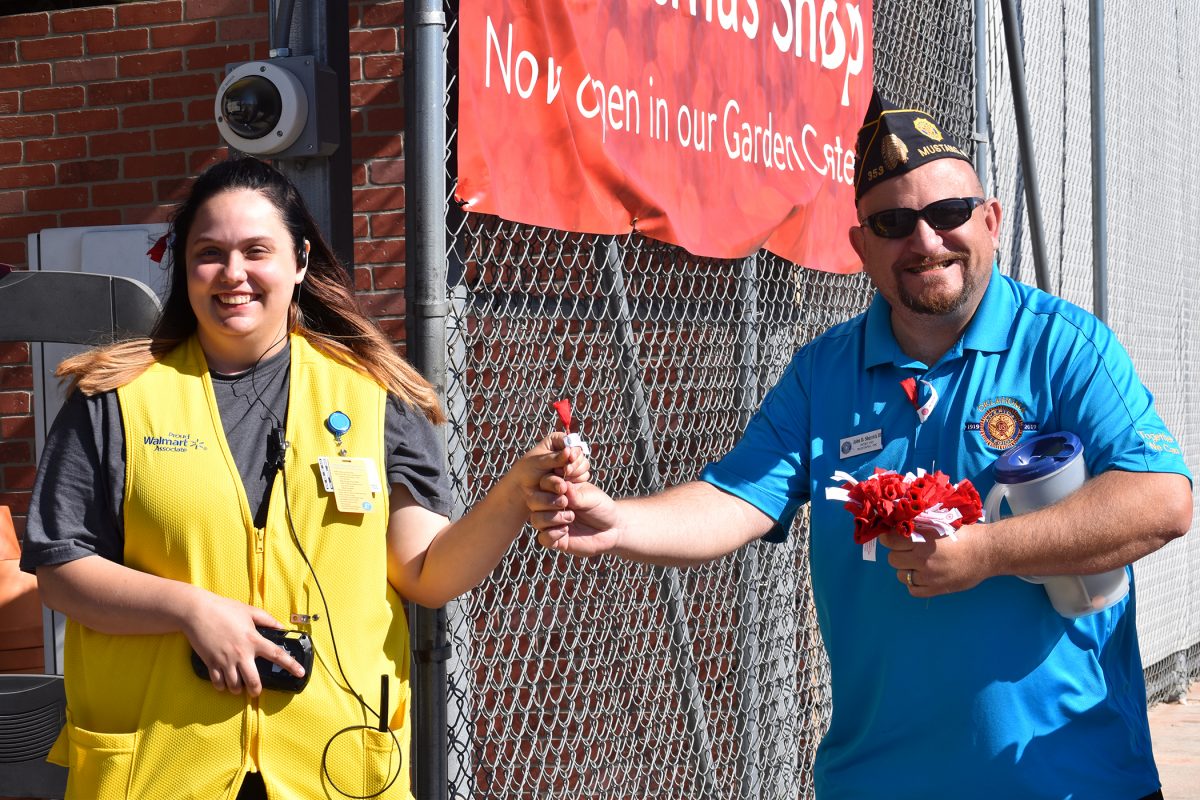 Mustang American Legion Post 353 members were on hand Saturday, as they distributed red poppies to the public as a way to commemorate Monday’s Veteran’s Day holiday, as well serving as a fundraiser for the local post. (Photo by Traci Chapman)

American Legion Post 353 members Saturday greeted shoppers at Mustang Walmart with a symbol of ultimate service, a reminder of the importance of Monday’s Veteran’s Day commemoration.

“We want to be able to pass on the importance this little flower, to show how poppies are important for us in the American Legion as a symbol of the ultimate sacrifice solders make in the line of duty – and the sacrifices of all service members and their families who give of themselves for their country,” Post 353 former Commander John Bishop said.

The red poppy is a symbol long embraced by the Legion, one in fact going back decades. The flower itself came to prominence in the context of war in 1915, when a surgeon serving during World War I was moved by the death around him to write a poem that still resonates today, Legionnaires said.

Major John McCrae was a surgeon attached to the 1st Field Artillery Brigade, a man who had seen battle and death – but it was a single death that would prompt McCrae to look at the battlefield and see something different.

That death happened May 2, 1915. A former student of McCrae’s at Quebec’s McGill University, Lt. Alexis Helmer died from a shell burst. With no chaplain there, the surgeon performed a funeral on a warm day in Belgium for his friend and one-time student. There, among the death, red poppies were growing – a sight that moved McCrae to recognize not only Helmer, but all of the fallen.

He did that with “In Flanders Fields.”

The poem would become synonymous with sacrifice in battle; ironically, McCrae himself would lose his life in the first “Great War,” dying of pneumonia in January 1918 while still serving in France. He left behind, however, words that called to others through the decades, phrases that would help spur a special way of remembering the sacrifice of those who died to protect American freedom.

Mustang Legionnaires offer poppies as a remembrance of veterans’ sacrifice each November and May as they commemorate Veteran’s and National Poppy days. Not only do those offerings bring attention to what the poppy symbolizes for the Legion; it also serves as a fundraiser to help members provide services to the community, Bishop said.

“This is an important fundraiser for us, as it helps us complete our other community projects, but it’s also so important in and of itself, because we must always remember what these individuals have done for each and every one of use,” Bishop said. “We want to make sure that everyone – particularly our younger generations – know about the poppy and what it really means.”

American Legion posts across the country take part in the annual effort, something that began in 1942, when its auxiliary in 1942 first started annual poppy fundraising drives. Legionnaires designated the poppy its official memorial flower in 1920.