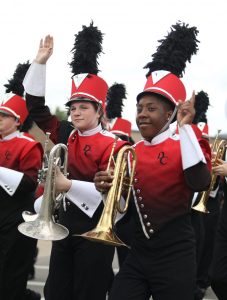 “I am so proud of our kids and their achievements,” he said. “We had a good season, we had fun, did well and are looking forward to what’s next.”

The 125-member band’s 2019 program “Ghosts” brought an otherworldly quality to the field and a lot of challenges to band members eager to expand their skills and knowledge, the director said.

That eagerness also showed on the field in Tishomingo in early October, as Del City was one of 29 marching bands from Oklahoma and Texas to take part in Chickasaw Day of Bands, a longtime marching festival that’s the highlight of a weeklong Chickasaw Nation celebration,

“It’s always a great, great experience for the band, and one of the highlights of our season,” Martz said. “But, it’s also more than that – there’s a lot of time, dedication that goes into marching band, and our band really gave more than ever before this year.

“That’s all we can ever hope for, and we are very happy with the final result,” the director said.

OSSAA is different than most other tournaments, which feature schools competing against each other for rankings. The secondary school association system provides feedback and ratings based solely on a band’s stand-alone performance.

While the excellent rating is short of OSSAA’s top designation – a superior assessment – it means a band shows only minor defects in its performance; to achieve the ranking bands must be “worthy of the distinction of being recognized as being among the best,” according to the OSSAA.

“It’s a great opportunity for the band to share what they’ve learned in a different kind of way and see that they are part of making the Pride something that continues into the future,” Martz said. “It’s amazing to watch both our kids and the elementary school students – their interaction, the way the little kids’ faces light up when they see them in uniform and see what they can do.”