While Midwest City High School’s Bomber marching band might be smaller than many others across the state of Oklahoma, its members no less put their heart and soul into what they do. 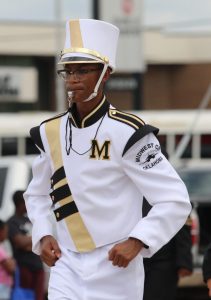 It’s not a difficult thing – although budget constraints mean less contests and a program without the flash of larger schools, there is plenty of pride and talent to go around – something that begins first from director John Davis and his staff, for whom the program is a labor of love for director John Davis and his staff, who over the years have directed hundreds of musicians through a musical journey that have made their lives better for having been involved in the activity, students and their parents say.

“It’s simply a matter of dollars when it comes to what we’re able to do, unfortunately, but that doesn’t mean our students don’t put everything they have into it, and I am very proud of their accomplishments,” Davis said.

Those accomplishments included taking part in East Central University’s Tigerpalooza, a longtime Midwest City band tradition also known as the Bron Warren Tournament of Bands. This year the Bombers was one of 15 performing bands taking part in the Sept. 30 event that brought about 3,500 to Ada, tournament organizers said.

As it often is, OSSAA west regional was a highlight for the Bombers, a chance for feedback on the band’s efforts and this year a gratifying result, which yielded members an excellent rating at OSSAA West Division contest, held at Yukon High School.

OSSAA is different than most other tournaments, which feature schools competing against each other for rankings. The secondary school association system provides feedback and ratings based solely on a band’s stand-alone performance.

While the excellent rating is short of OSSAA’s top designation – a superior assessment – it means a band shows only minor defects in its performance; to achieve the ranking bands must be “worthy of the distinction of being recognized as being among the best,” according to the OSSAA.

Up next for Midwest City is concert band, which extends through the spring and the rest of the school year. Davis said the high school has two concert bands, one a 6A level and the other a level below, with all band students assigned to one of those groups.

“Concert band is a fun time, and we all always look forward to the transition,” Davis said.