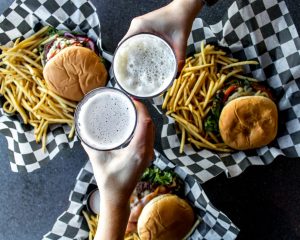 A new restaurant is coming to Midwest City.

Louie’s Grill and Bar plans to open a new location at 6007 SE 15th Street, inside the Sooner Rose Shopping Center.
The new restaurant will be located in the former Mojo Sports building. The building was recently renovated for the

restaurant on the north end. Additional commercial space is open on the south end.
Crews are expected to begin work on the inside of the building next week. It is scheduled to open in mid March, said Brent Kennedy, managing partner for Louie’s.

The 4,500 square-foot restaurant includes a full bar and dining area with seating for about 150 people. The menu includes burgers, pizza, wings, wraps, fish, tacos and drinks.

“It’s a great menu that won’t cost you an arm and a leg to eat here,” Kennedy said.
Kennedy said they have been looking to expand in Midwest City and liked the new development near SE 15th St. and Sooner Rd.

The new restaurant will employ about 60 people. They plan to begin hiring the first week of February.

It will be the 15th Louie’s Grill and Bar. The company has locations across the Oklahoma City and Tulsa metros and Stillwater.

Louie’s Grill and Bar is part of the Hal Smith restaurant group. The Norman business operates other popular Oklahoma restaurants including Charleston’s Restaurant, The Garage Burgers and Beer, Toby Keith’s I Love This Bar and Grill, Red Rock Canyon Grill and Mama Roja.