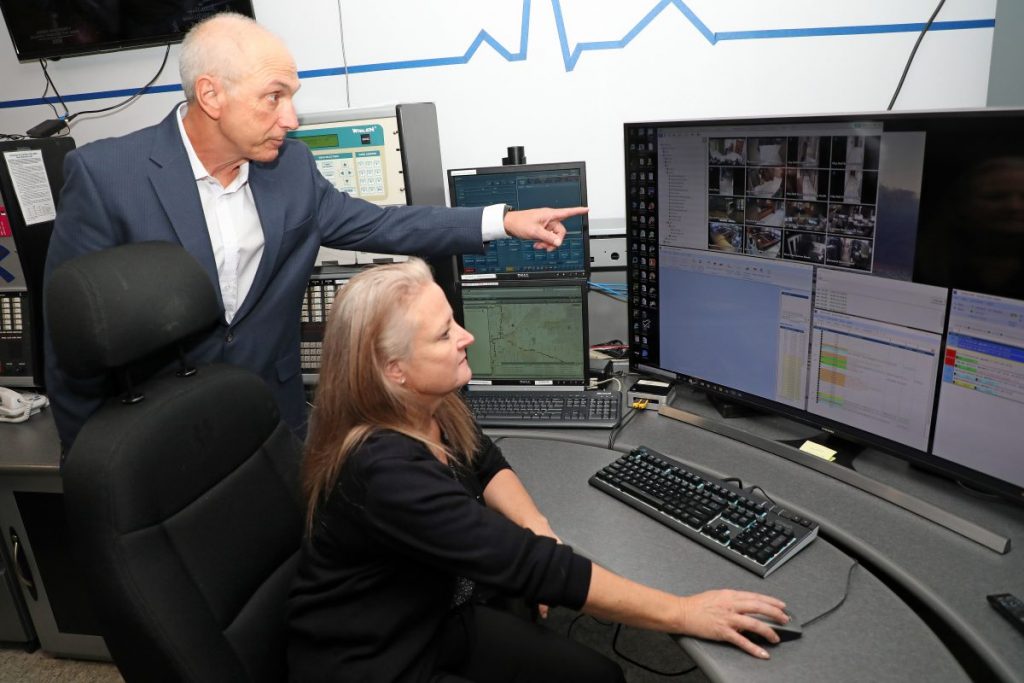 Mike Bower talks to Debi Wagner about Midwest City’s 911 emergency dispatch system last Thursday. Bower is retiring after 42 years with the city,including the past 15 as emergency management director. He is being replaced by Wagner. (Staff photo by Jeff Harrison)

Midwest City is saying goodbye to one of its longest tenured employees.

And welcoming one of its newest.

Mike Bower, emergency management director, is stepping down after 42 years with the city including the last 15 in his current position. He said he’s enjoyed his years in public service but is ready for the next chapter in life.

“I’ve said that if I continued working, I would keep doing this, but I’m not looking for another job. At some point you’re just ready to retire. And of the 470 some city employees, I think I’m the most senior one.”

“Debi (Wagner) is well qualified and obviously has good experience and I think she will fit in well here,” Bower said.
Bower started with the Midwest City Fire Department in 1977. He climbed the ranks and was promoted to chief in 1988. Bower led the department for 16 years before leaving to become the city’s first full-time emergency management director.

“I was the first real working emergency management director for the city and that was a big change,” he said. “Emergency management had previously been a duty for an assistant city manager and that’s just not what a city of our size should have.”

“The 2007 ice storm was huge for us,” he said. “It took a long time to get everyone’s power back on.”
Bower has also helped the city receive millions of dollars in grant dollars for storm shelters, radios, mitigation and other projects.

He says he will continue cheering for the city from the sidelines.

“I want to see this community grow and prosper and I want Debi to be the best thing that’s happened to emergency management,” he said. “I feel the same way that I did when I retired from the fire department. I have a lot invested in those organizations and want to see them do well.”

Bower says he can rest easy with Debi Wagner taking over. She has extensive experience in emergency management and disaster response and a passion for service.

“I like solving problems and feel protective of people and animals,” she said.

Wagner has served as deputy director of emergency management in Moore for the past five years. She previously worked as the state director of Medical Reserve Corps, where she organized 5,500 volunteers for disaster response. She also worked as volunteer coordinator for Catholic Charities and RSVP of Central Oklahoma.

During those years, Wagner has responded to disasters across the country, including Hurricanes Katrina and Harvey, and floods in Muskogee this spring.

Wagner said she was excited about the opportunity to lead emergency management operations and to serve her community.

“I live in Midwest City and I’m very excited to take care of my community,” she said. “I love the people of Moore but I didn’t live there so there was always a little disconnect.”
She earned her undergraduate degree in criminal justice and a master’s degree in fire and emergency management administration from Oklahoma State University.

Wagner is a native of upstate New York and moved to Oklahoma 20 years ago when her husband was stationed at Tinker Air Force Base. The couple has two grown sons, Matthew, 26, who is a detective with the Lindsay Police Department, and Andrew, 21, who is a student. They also have two horses, eight goats and four dogs.