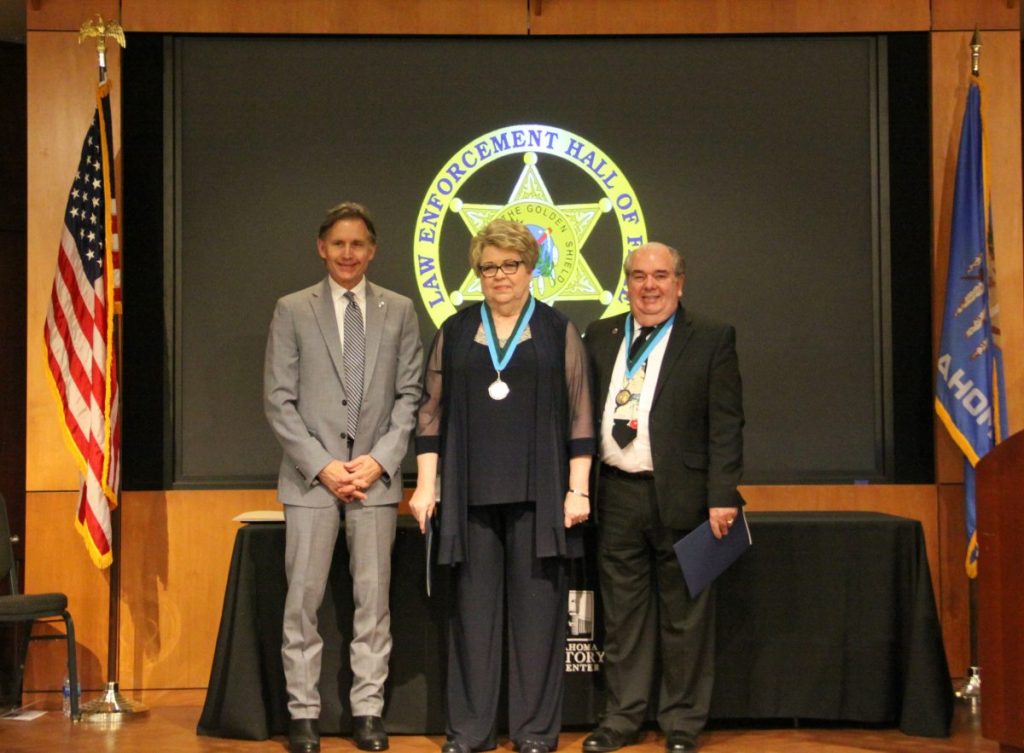 The 11th Annual Oklahoma Law Enforcement Hall of Fame Induction Ceremony was held at the Oklahoma History Museum on December 7th and honored two Midwest City residents, Dennis and Karen Lippe. This was a unique induction because not only are these two the first married couple to be inducted, but Karen is also the first non-law enforcement officer to be inducted as well.

“I don’t know how many years I’ve been doing this but this is the first time I’ve ever seen a husband and wife team both inducted and so that’s a pretty unique situation. But then, Dennis and Karen are pretty unique people. Individually, their service and legacy are so impressive but as a team, what they have accomplished is just that much more astounding,” said Lori Fullbright, of News 6 on Tulsa, who was the Emcee of the event.

Both Dennis and Karen were raised in Midwest City, and have lived there almost all of their lives. Dennis retired from the Oklahoma City Police Department as a sergeant in 1996 after 28 years. Karen worked in the Mid-Del Public Schools and retired after 30 years. Together they have spent the last 35 years working on the Oklahoma Law Enforcement Memorial, in additional to many other contributions. Dennis has served as the chairman of the Oklahoma State Fraternal of Police Memorial committee, and been instrumental in planning the annual Oklahoma Law Enforcement Officers Memorial service for 34 years.

“I’m so thankful that God has allowed me to do these things. We’ve met so many families of the officers who died in the line of duty, and I never met the officers but I know I’m trying to get through their stories so that you would know them also, and we’ve got more to do,” said Dennis.

Karen organized the first “Law Enforcement Appreciation Day” in the state, and has served as an officer for a variety of positions within the state and national Fraternal Order of Police (FOP) Auxiliary. She also helped organize an Oklahoma Chapter of Concerns of Police Survivors, which provides outreach and counseling for the families of fallen officers. Together they have served in numerous ways to preserve the memories and stories of fallen heroes, as well as to help their families.

“Dennis and I were always together. We always do everything together. If he’s doing a project and I can help him in any way, I always do that and he does the same for me,” said Karen. “What I’ve done is just been completely out of love and passion and compassion for our fallen officers’ family. I never did anything because I thought I needed to do that. It was just that was what I needed for me as well, and that’s what I wanted to do and it’s all come right from my heart.”

The Induction ceremony was led by Attorney General Mike Hunter, who also began something new at this year’s ceremony by giving the inductees an official commendation from the Attorney General’s office.

“I want to take this opportunity to start a new tradition at this annual ceremony as the chief law officer for the state of Oklahoma, I think it is only appropriate that all new inductees receive an official commendation from the attorney general’s office to honor their service. It will read as follows, in recognition of your courage and loyal service to the state of Oklahoma and its citizens, I commend you for your heroic work. As a law enforcement professional, you are on the front lines and tasked with keeping Oklahoma safe, even if it means putting yourself in harm’s way. For your selflessness and dedication, you’re owed a debt of gratitude that can never be fully repaid. Therefore, by the power and authority vested in me, I hereby confer on you this official commendation from the Office of the Attorney General,” said Hunter at the ceremony.