Proclamation expresses support for rare condition and families affected by it 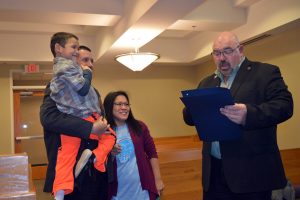 Two years ago a Mustang mayor first issued a proclamation bringing attention to a rare condition and those affected with it. Last week that recognition became permanent, as Angelman Day will be celebrated the 15th day of each February moving forward.

“Jay Adams first made this proclamation and declared Angelman Day as a special day in Mustang about two years ago,” Mayor Jess Schweinberg. “With this, it will mean it’s permanent.”

Angelman Syndrome came to the council’s attention because of a Mustang family’s experience with the rare affliction. Matthew Cook has come a long way in the almost four years since he was diagnosed with Angelman Syndrome, just as he was about to turn three. Now seven and a student at Mustang Trails Elementary School, Matthew has been a medical miracle to his doctors – and a miracle that transformed his family and many others who’ve come to know them.

Former Mayor Jay Adams and his wife Mindy were among those who met Matthew’s family – parents Mike and Maggie; brother Trent, who just turned 17; and adult sons Jeff and Mikey. When Adams presented the Angelman Day proclamation that first time in 2018, he talked about how Mustang’s recognition was a way to commemorate not only an unforgettable little boy, but also help provide support and awareness for the Cooks – and other families who face the uncommon disorder.

Mustang’s annual Feb. 15 Angelman Day is part of a larger international effort aimed at spreading awareness about the rare condition, a neurodevelopmental disorder that affects speech, balance and movement and causes developmental delays, meaning those afflicted with the condition will require care throughout their lifetimes. For the Cook family, that meant doctors believed early on Matthew would likely never walk or talk, a diagnosis that did not quite hit the mark.

That’s because while life has been a challenge for Matthew and his family alike, the now seven-year-old has thrived in ways never imagined during his early years. His parents say he loves school, he is able to communicate through sign language and has a billion-watt smile that charms everyone he meets. That smile – and the family’s indefatigable courage – has led to Matthew being named 2016 Oklahoma City March of Dimes’ Walk for Babies’ Child Ambassador; Mike, Maggie and Matthew last year took a summer trip spreading awareness and engendering support for Angelman Syndrome Foundation.

“That’s all down to Mike and Maggie and the rest of their family and how they’ve worked for each and every accomplishment and milestone,” Adams said when presenting the original Angelman Day proclamation. “Matthew is a remarkable little boy, in great part because he has a remarkable family.”

That remarkable family – and their remarkable journey – is not an easy one, nor will it ever be, his parents said, but those challenges have only made them closer, and Matthew has become his own person, a little boy with the strength his parents have shown over the seven years of his life.

“There’s this side of Matthew and he has reminded us that no matter what the diagnosis, he is never defined by its symptoms,” Maggie said.