Christopher Hunt has been an Oklahoma State University fan for as long as he can remember.

Growing up in Midwest City, he proudly recalled following the same path as Mike Gundy from Ridgecrest Elementary to Oklahoma State University.

“I was one of the weird ones that followed Oklahoma State,” Hunt said. “Most of my friends were OU fans. I guess I like the underdog.” 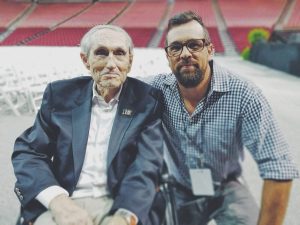 When Hunt was looking for inspiration for his next film, he found it in legendary college basketball coach Eddie Sutton. The former Oklahoma State coach was recently selected for the Naismith Memorial Basketball Hall of Fame following a successful and at times controversial career that included more than 800 wins and three Final Four appearances. Sutton had been denied induction six times before being selected this year.

“I knew there was a story there,” Hunt said. “Growing up an Oklahoma State fan, I watched coach’s career from afar. I knew that he had credentials, but for whatever reason wasn’t getting in.”

Hunt and fellow filmmaker David Tester took on the Oklahoma icon for their new documentary titled “Eddie.” The film has been selected to headline the 20th annual deadCenter Film Festival June 11-21. This year’s event will be moved online due to the coronavirus.

“It is quite an honor to be selected for deadCenter and I think this is an important story in regards to Oklahoma sports and history,” Hunt said. “A lot of people are anxious to see it.”

This is Hunt’s first feature length film. He won best Oklahoma Short Film at deadCenter in 2015 and 2017. He and Tester work together at 1577 Productions, a film production studio they own and operate in Oklahoma City.

“Making a feature film is a completely different animal,” Hunt said. “And to get it off the ground, we had to tell a lot of people about it. So, I’ve felt a lot of pressure as an Oklahoman and telling this important part of Oklahoma sports history and to do it right.”

The crew started working on the project in 2016 after receiving the Sutton family’s blessing.

Hunt said the journey to the Hall of Fame is important but not the only theme in the film. They delve into the highs and lows of Sutton’s professional and personal life.

“We wanted to be brutally honest and tell his story,” Hunt said. “We had no interest in making a propaganda piece.” 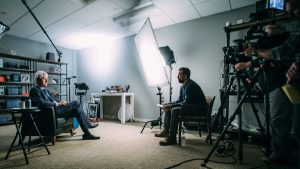 Midwest City native Christopher Hunt interviews President Bill Clinton for a documentary about legendary coach Eddie Sutton. Clinton and Sutton became friends while they were both at the University of Arkansas. (Provided photo)

“Rex (Chapman) gave us one of the coolest interviews,” Hunt said. “He was so real and so honest.”

They also interviewed former President Bill Clinton and Dallas Cowboys owner Jerry Jones. Both became close with Sutton while he was coaching the Razorbacks in the 1970s. Hunt said they were able to get in touch with President Clinton through the Oklahoma Democratic Party.

“It took about nine months to get the interview set up with President Clinton,” Hunt said. “Once we got the email about it, we flew to New York and sat down with him for 30 minutes. And it took about a year to get an interview with Jones.”

The Sutton family played a vital role in the film. Hunt said they spoke extensively with Eddie’s sons Sean and Scott. Eddie Sutton is no longer able to speak due to health reasons. Oklahoma State provided interviews he did years ago as part of a history project.

“Even though he is not able to speak, you still really hear his voice in the film,” Hunt said.

The team wrapped up the documentary around the beginning of the year, but they were in limbo with the Hall of Fame announcements looming. News of Sutton’s selection arrived earlier this month. Hunt said he stayed up that night editing the film to include the long-awaited milestone.

Hunt said they are now searching for a distributor for the film. He believes the most likely route would be a premium cable channel or streaming provider such as Netflix, Hulu or Amazon Prime.

“We have very high hope that we will find a home but trying to make a timeline is just fool’s gold right now,” he said.