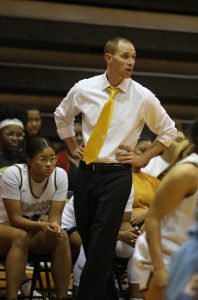 Corky McMullen was named the Midwest City boys basketball coach. He coached the Lady Bombers for one season. (Staff photo by Jeff Harrison)

Daniel “Corky” McMullen, who has been the girls coach for the past season, was named the Bombers coach Wednesday. He replaces Dewayne Bradley, who resigned last month to take another coaching job.

Andy Collier, Mid-Del- director of student activities, said they had a strong pool of applicants including three others with Division I coaching experience. He was impressed with McMullen’s work ethic, experience and vision for the program.

“We want someone who can win championships and someone who has a long term plan,” Collier said. “His vision includes creating involvement at the elementary school level all the way up to high school.”

McMullen takes over a Bombers program that is rich in tradition and expectations. They reached the state finals three times and averaged 21.5 wins during Bradley’s 12 seasons. Midwest City will return several players from this year’s state tournament team.

“(Dewayne) Bradley did a heck of a job and won a lot of games here and we wanted someone that can build off that legacy,” Collier said.

McMullen is a New York native and has coached at the college level for 12 years. He had been the men’s coach at his alma mater Houghton College since 2016. He previously served as director of basketball operations at Rutgers University.

While McMullen has lived in Oklahoma a short time, he is familiar with Mid-Del athletics. He is part of the famed Smith and Realmuto families. He married Ryan, a softball standout at Del City and Oklahoma State. His brother-in-law is JT Realmuto, an MLB All-Star catcher for the Philadelphia Phillies and former Carl Albert standout.  Ryan and JT are grandchildren of the late Lee Roy Smith.

Sports were a big part of McMullen’s life from a young age. His father coached high school football and basketball for 35 years.

“I knew from a young age that I wanted to coach because of the impact my dad had, not only on his student athletes, but on the community and the school over a long time,” said McMullen in a previous interview.

McMullen started his coaching career after college. While at Hofstra University, he met his wife Ryan who was a softball coach at the school. They have five young boys and had been looking to move to Oklahoma.

He was hired as the Midwest City girls coach in July. The Lady Bombers went 17-10 this season, reaching the area consolation finals.

Collier said they hope to have a new girls coach hired by the June school board meeting.

“I think we’ll hire a really good girls coach and it will be a win-win for Midwest City,” he said.