COVID-19 wiped out spring sports nationwide and a lot of ink has already been spilled about it, telling story after story of what could’ve been for this boy, or that girl. Mustang senior soccer player Eric Hotwagner is a remarkable young man who beat setback after setback, beat the odds time after time, and is a true inspiration to those who know him.  Hotwagner experienced heartbreak and despair for sure, but also hope and victory, and determination to never give up on dreams.

Jared Homer, Hotwagner’s coach for the last four years, knows better than most what Hotwagner endured to play soccer. 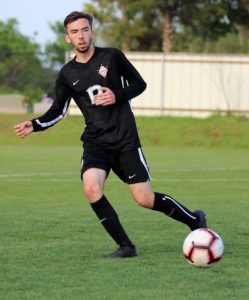 “Eric is a guy who had setback after setback, but never felt sorry for himself,” said Homer. “After each setback, he just did whatever needed to be done in order to play soccer again. He attacked his rehab, which I always appreciated. That will help him later on down the road. Eric is a quiet guy; he always let his play on the field do his talking for him.”

Guys like this fly under the radar, never getting their moment in the sun, never hearing the roar of the crowd for them. Hotwagner was, and is, an excellent soccer player. Just ask his coaches and teammates.  And ask the coaches around the state, who named Hotwagner to the All-State and All-District team for the 2020-2021 school year.

SM: Eric, would you please tell me your story from your freshman year until now?
EH:  My freshman year, I got to play some with the varsity.  The game I remember was against Lawton, and I scored my first varsity goal. It was really cool because my older brother Ryan also scored. My sophomore season, I broke my leg and missed the entire year. I did all the rehab and came back the next year ready to play my junior season. But before the season even got started, I broke my leg again, the same leg and in the exact same place. So I did rehab all over again and got myself ready to play my senior year. Then, after just a few games into my senior season, COVID-19 hit and my season was over again

SM: How many games did you play this season?
EH:  I got to play in 11 games, and I had five goals and four assists.

SM: Tell me a little bit about your family.
EH:  There’s my dad, Jerry, who does finance at an oil company. My mom, Amy, is an accountant in real estate. Then there’s my brother Ryan, who is a junior at OSU studying Marketing.

SM: Do you have college plans?
EH:  I’m going to go to Oklahoma State for an engineering degree.

SM:  Who is the person you most look up to?
EH:   My brother and my dad. My dad for the way he handles himself around people. My older brother because I like the way he does things. I want to sort of be like him, kind of.

SM:  What’s your favorite movie quote?
EH:   From the Dark Knight, when the Joker says “If you’re good at something, never do it for free.”

SM: Thank you and best of luck, Eric Hotwagner!