Project will replace roadway between Babb and Indian

Midwest City plans to upgrade a major street in the Original Mile neighborhood.

The city council last week approved a project to reconstruct Key Boulevard between Babb Drive to E. Indian Drive as well as improvements to entrances at Midwest City Elementary. 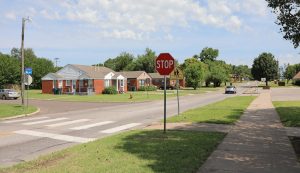 Turning Point Industries, Inc. was awarded the contract for $533,539.95. The project includes construction of a concrete roadway, sidewalks, improved crosswalks, and relocating driveways at Midwest City Elementary School. It also includes beautification elements such as decorative inlays and accents similar to those near Key Blvd. and Wilson Dr.

Councilwoman Susan Eads, at a previous council meeting, raised concerns about traffic flow through the intersection of Key Blvd. and Kittyhawk Dr. near the elementary school. She said the current configuration causes traffic to backup. The Mid-Del School District granted the city a temporary easement to realign the entrances of the parking lot to improve traffic flow from Kittyhawk Dr.

“Our hope is by making Kittyhawk and Key a four-way stop it will improve traffic flow,” said Brandon Bundy, city engineer.

Midwest City also plans to add sidewalks along Kittyhawk Dr. as part of a separate project.

Bundy said he expects construction to begin soon and hopes to have much of the work near the school finished before classes resume in August. The construction contract allows for 90 days.

The project will be paid for with city funds and a $75,000 community development block grant.

Midwest City completed phase 1 of the Key Boulevard construction project in 2018. It included reconstruction of the roadway between SE 15th St. and Wilson Dr. The project is part of the Original Mile Revitalization plan.