The controversial proposal would allow medical marijuana dispensaries to operate between the hours of 7 a.m. and 10 p.m. The city does not currently regulate when businesses can operate.
Supporters of the amendment say it will help reduce noise and nuisance complaints for businesses located near residential areas. One marijuana dispensary, 405 Budz on S. Air Depot Blvd., which is open 24/7, has generated several complaints. 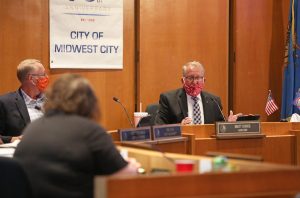 Councilwoman Susan Eads argued that issues at the business are disruptive to a nearby residential area. She said the council should take action to curb repeat offenders, rather than use the police department to handle it.

Councilman Sean Reed said the proposal targets one business that has had multiple nuisance complaints. He believes those issues can be addressed under current law and citations.

“I think if we make a new ordinance targeting one business that sets a terrible precedence,” Reed said. “I also believe if we get in the back pocket of any business as to when they can open, then it opens our ability to get into everyone’s pockets.”

Police Chief Brandon Clabes said the business owner has private security during hours of operations. He said they have received many calls about the business and believe some residents are hesitant to file a complaint. Officers have met with the owner who promised to cooperate and resolve the issues. Clabes agreed to follow up again.

Councilman Pat Byrne said that since January 1, police have been called to the business nine times. Two of the calls came outside of the proposed business hours.
The state does not have restrictions on business hours for medical marijuana dispensaries.

The council agreed to take no action on the item, which would allow city staff to modify the amendment and present it later. Eads suggested waiting 60 days to see if the problems improve.
While the medical marijuana dispensary change was not approved, the council agreed to four other changes to city codes.

Under the amended ordinance, a disorderly house is any structure or vehicle where the peace, comfort, health, welfare, or decency of the public is disturbed by people committing three offenses within one year. Those offenses include sale or distribution of illegal drugs, illegal sale, distribution or possession of alcohol, unlawful sexual act, illegal gambling, weapons violations or final conviction of any Section 28, Section 26.3, or Section 26.4 Midwest City ordinance offenses.

The city must provide written notice in person and or by certified mail notifying the tenant or property owner that a property has been determined a disorderly house.

Under the original ordinance, the city could declare a disorderly house if a property had three convictions within a rolling 90-day window.

Another amendment changed the required value of damage done to real or personal property for malicious injury or destruction of property. The amount was lowered from $2,500 to $1,000 to conform to state law.

And they removed a requirement that all bicycles be licensed with the city. The state does not require bicycles be registered. All other regulations for bells, brakes, and reflectors would remain in place.

All the amendments presented at the council meeting were recommended by the city’s ordinance review committee. The group was created to update and modify city ordinances as needed.