Erin Rennick was hired the girls coach and Trevor Hunt will take over as the boys coach after coaching the girls for the past three years.

Rennick previously coached boys at Midwest City High School. She was an assistant in 2019 and promoted to the head coaching position last year. 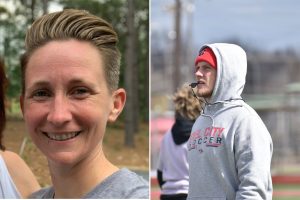 “Trevor Hunt did a really good job building up the program and I’m excited to take what they have established and put my own flair on it,” Rennick said.

Rennick comes from a military family and moved several times as a child. She graduated high school from Okinawa, Japan and later played soccer collegiately at Winthrop University.

She later coached at Valdosta State University where she also earned a master’s degree. Rennick also coached club soccer in Tallahassee, Florida, before moving to Oklahoma in 2016. She started as substitute teacher at Kerr Middle School.

Rennick now teaches language arts at Del City High School. She is also an assistant with the volleyball team.

Hunt said he’s excited about the new opportunity to lead the boys.

“I’ve enjoyed coaching the girls and plan to continue helping them, but I am excited to see what the boys team can do,” Hunt said.

Hunt grew up in Moore and went to college at East Central University where he was also a kicker on the football team. He started his coaching career as an assistant at Ada for one year while in college. After college, he was hired at Del City High School where he taught and coached girls soccer.

Rennick and Hunt are close friends and both play in an adult soccer league. They plan to work together to build the Del City soccer programs.

“The boys and girls teams have been exclusive from each other and we’re going to try to build a culture and combine them for training and coaching,” Hunt said. “If she (Rennick) sees something that we can do, then we’re a better program for it.”

Both coaches are helping student athletes with summer pride workouts.