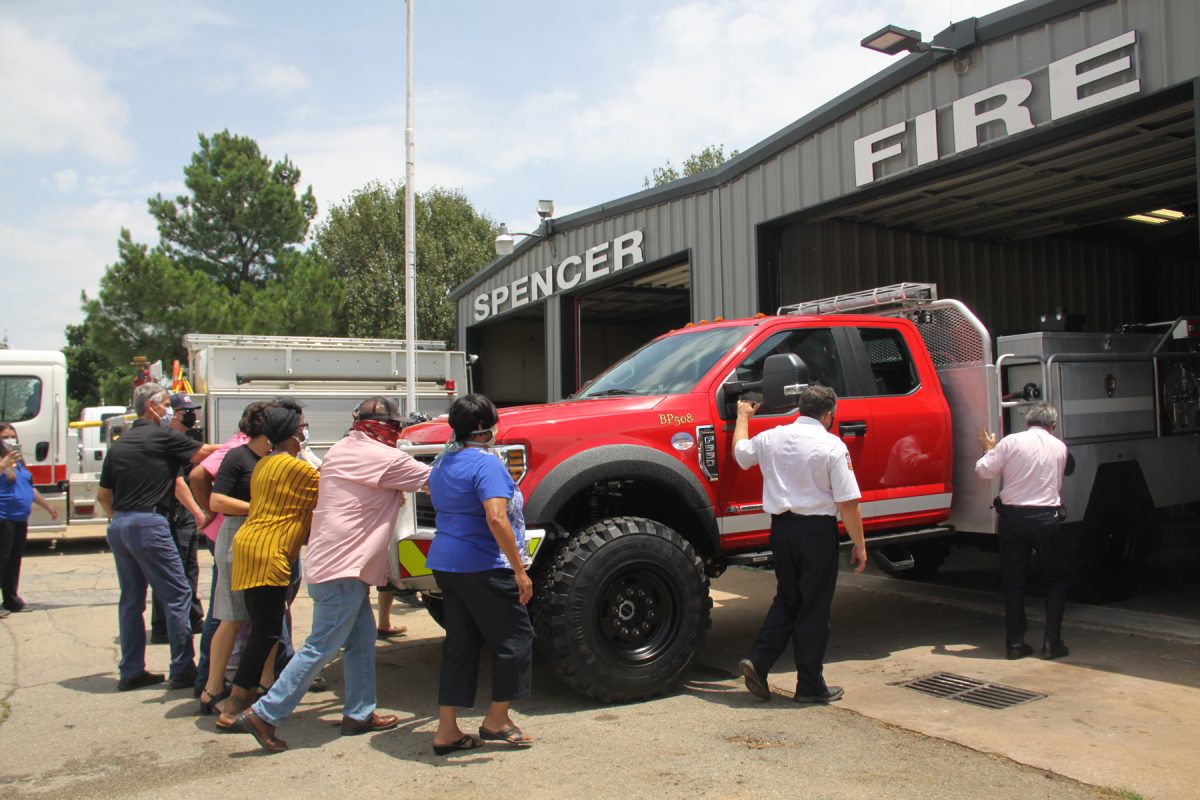 It was a day of celebration as city leaders and community members gathered at the Spencer Fire Department on June 29 to present the new state-of-the art brush pumper truck. The fire department held a traditional “wetdown” ceremony and ribbon cutting to showcase the new vehicle. 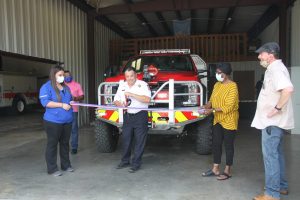 The City of Spencer and Spencer Fire Department have been working on this project for over two years, and with the help of the Association of Central Oklahoma Governments (ACOG) and the Oklahoma Emergency Management Services, they were able to see the project through. ACOG awarded the fire department a $55,000 grant through their Rural Economic Action Plan (REAP) program. The Oklahoma County Emergency Management Services supplied them with the truck chassis, which is valued between $44,000-$48,000. With the help of those services, and a public safety tax passed by Spencer, the city was able to purchase the new vehicle which is valued at about $190,000.

“It’s a new brush pumper, or wild land fire and rescue unit. Basically, we’ll be using it for grass fires, wildfires, and on minor rescue calls. It’s a 2020 F550, it was sent to be converted into what’s called a T5 Skeeter Brush unit. It holds 400 gallons of water on it and 10 pounds of foam. Everything from the turret on the front to the hose lines in the back, everything can be controlled from the cab. As far as the water is concerned, we can start and stop pumps from inside,” said Fire Chief Dale Griffith.

The “Wetdown” ceremony is a traditional event that dates back to the times when fire pumpers were horse-driven and powered by hand. Following a fire, the horses would be separated from the pumper car and both horse and pumper would be washed by the firefighters.  The pumper would then be pushed back into the station ready for the next fire. The firefighters wet down the new vehicle, and with the help of others attending the event, they pushed it into the fire station, signifying that it is ready for service.

“This is great event for our city. We’re very excited that this is happening, this is very important for our community. Thank you to everyone here for helping to celebrate with our city,” said Mayor Frank Calvin. “Our number one job as elected officials are to make sure that we do the right thing for our city, when we vote and say yes for equipment like this, we are doing our citizens right.”

The City Council put together a tribute award to show how far the fire department has come through the years which they presented at the ribbon cutting. Many city leaders were in attendance to support the Spencer Fire Department including Oklahoma County Commissioner Carrie Blumert and Director of Emergency Management of Oklahoma City Frank Barnes. 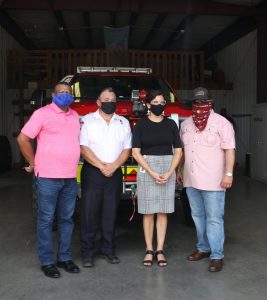 “One of my favorite parts of my job is coming out to communities like Spencer and getting to help people and see my constituents face to face and see things that actually impact their everyday life, and that is what I really love about this job,” said Blumert.

“The truck is also part of the Oklahoma County Task Force, which that means anywhere in the state of Oklahoma, if there is a call for the task force, there is a group of us, of fire departments all together,  each department sends what they can to go help with that fire. It could be anywhere, so it’s going to help more than just us,” said Griffith. “It’s the most advanced type of truck that we have ever had, by far. The community is welcome to come look at it anytime, the firefighters will show them, so come see what your city has.”