A for sale sign is going up at Jarman Middle School. 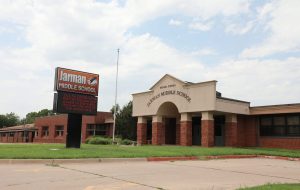 Mid-Del Schools plans to sell Jarman Middle School which closed at the end of the last school year. (Photo by Jeff Harrison)

The Mid-Del School Board hired a commercial realty firm to sell the 76-year-old school building.

Superintendent Rick Cobb said the district wants to sell the unused building at 5 W. MacArthur Dr. as part of the middle school consolidation. The district closed Jarman and Del Crest middle schools and combined them with Monroney and Kerr. Del Crest has been converted into the Mid-Del Learning and Services Center and houses enrollment, special services, child nutrition and others.

Equity Commercial Realty II, LLC. will help in assessing, advising, and marketing the building. The Norman based firm has worked for Norman Public Schools and the University of Oklahoma.

“The transportation building, the football field and Jarman form a T shape and some of those probably sit on multiple deeds,” Cobb said.

The district plans to retain some of the land behind Jarman that will be used to expand parking at Rose Field. The district added a parking lot to replace one lost during the stadium renovations.

Cobb said he also plans to meet with city officials to discuss plans for redevelopment of the school building.

“We don’t want to sell it in a way that hurts the school district or the city,” Cobb said. “We want it sold and developed to benefit the Original Mile neighborhood and the city as a whole.”

Earlier this year, the city council voted down a zoning request for an apartment complex near Jarman Middle School. The proposal drew strong opposition from several neighbors.