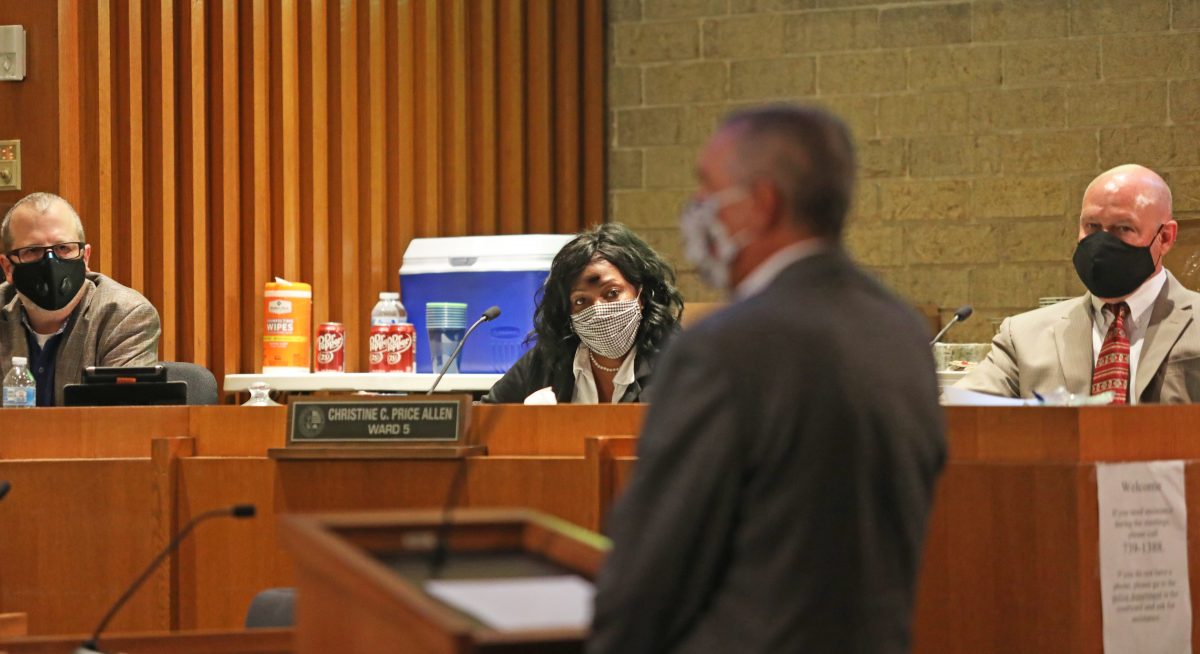 Members of the Midwest City Council listen as Ray Maytbubby, chief of operations for the Oklahoma City County Health Department, speaks about the need for a public mask ordinance during a meeting on July 28. (Photo by Jeff Harrison)

The Midwest City Council last night approved a public mask ordinance to help reduce the spread of COVID-19. The emergency order requires people to wear face coverings over their noses and mouths while in public places wherever it is not possible to maintain social distance from others.

The ordinance went into effect immediately and will remain in place until Sept. 22 when the council will consider whether to continue it.

City Manager Tim Lyon said the mask order is in response to an increase in positive cases and hospitalizations and at the recommendation of public health and hospital officials and city council members.

“The goal of this for public safety and the safety of our community,” he said. “We wouldn’t be asking for this if we didn’t see a rise in the numbers.”

The ordinance states that, “every person in the City of Midwest City shall wear a face covering over the nose and mouth worn consistent with CDC guidelines when inside a commercial entity or other building, structure or space open to the public, wherever it is not feasible to maintain six feet of social distancing from another person not in the same household.”

It include exceptions for:
– Children under the age of 10.
– Person with medical or mental health condition or developmental disability that is not recommended to wear a face covering by the CDC.
– Person who is eating or drinking food or seated at a restaurant.
– Person who is exercising or engaging in physical activity outdoors, and maintaining safe distance from others not in the same household.
– Person who is performing cardio exercise and maintaining safe distance from others not in the same household.
– Swimming pool, body of water or spray park
– Private homes.
– Offices and workplaces that are not public service areas and where social distancing can be maintained.
– Persons who are obtaining a personal care or for security surveillance which temporary removal of the face-covering is necessary.
– Person giving a speech for broadcast or to an audience.
– Person performing work in which a face covering presents a hazard.

There is no specific penalty or punishment included in the ordinance, but anyone refusing to wear a face covering in public places could be prosecuted for other laws such as trespassing, disturbing the peace and disorderly conduct.

Anyone with concerns about face coverings not being required in public places can contact the city’s non-emergency number at 739-1388.

During the meeting, the council heard from Ray Maytubby, chief of operations for the Oklahoma City County Health Department. He strongly advised the council to approve a mask order due to the spike in positive cases of the virus and continued community spread from people who are pre-symptomatic or asymptomatic.

“I think you are all quite aware that our numbers are not going down,” he said. “We’re seeing some pretty exponential growth. This is something we really need to do and it’s probably the most effective and most equitable way for your community to be protected.”

“That way the public doesn’t lose confidence in their ability to go out to places to eat or get their hair cut or whatever,” he said. “This is the thing that will keep our economy rolling.”

National health experts have identified Oklahoma County as a potential hot spot for the virus. Maytubby said the department recently received a call from Dr. Deborah Birx with the White House Coronavirus Task Force urging Oklahoma County to “mask up.”

Several council members spoke in support of the ordinance. Councilman Pat Byrne said he is especially concerned about the rise in pediatric cases and believes the public has a responsibility to take efforts to curb the virus.

“For us to not act on the possibility that a mask would work is unacceptable,” he said. “We need to do whatever it takes.”

Two members of the public spoke in favor of the mask order and thanked the council and Maytubby for their support. No one spoke in opposition of the order.

The council unanimously approved the mask ordinance with an emergency clause, making it effective immediately.

Midwest City is the 13th city in the state to require masks in public. Others include Norman, Stillwater, Tulsa, Oklahoma City, Lawton, Altus, The Village, Ada, Shawnee, Warr Acres and Nichols Hills.

Answers to frequently asked questions and additional information, including a copy of the ordinance listing the exceptions, is available on the city’s website at midwestcityok.org.