Volleyball season is just around the corner for the three local high schools.

Carl Albert, Del City and Midwest City started their fall practices a few weeks ago and will get their first taste of competition next week. 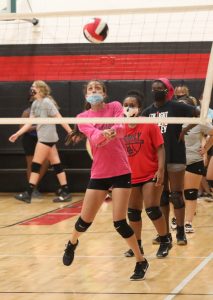 Midwest City and Del City both open the year Aug. 11. The Lady Bombers face the OKC Knights and Del City hosts Elgin. Carl Albert’s season opener against Claremore has been canceled. They are set to open the year with the Coweta Tournament on Aug. 14-15.

Expectations will again be high for the Carl Albert volleyball team.

The Lady Titans are coming off consecutive state tournament appearances and have several key players returning.

The team will have big shoes to fill with recent graduates Carmae Jones and Abby Boyer. Jones was the Suburban Conference MVP and Boyer was an all-conference first-team selection.

“I think we’ll do really well this year,” said coach Hadyn Robbins. “We’re strong all around the board and have at least three people competing for every position.”

Robbins is in her first year as the Lady Titans coach. She said the team has quickly come together this summer despite the challenges due to coronavirus.

“It was a little slow at first getting things going, but they all know my expectations and it’s been smooth sailing,” Robbins said.

Nikki Montes takes over as the Lady Bombers coach. She was the girls soccer coach and assistant cross country coach last year.

“We’re trying to find the combos that work well on the floor and working on trusting one another and communicating,” she said. “I feel like we have the skill set to win games and put Midwest City back on the map.”

The girls are also committed to improving a major flaw from last season.

“Last year we’d start off strong but couldn’t finish our sets,” said MacKenzie Golden, senior libero. “We’d win the first couple sets and lose the next three. I feel like we have the endurance and effort to do it, we just need to work on it.”

The team will have four seniors this year with Golden, Kashiya Birdsong, Ki’Annua Chandler, and Julianna Mack, who moved-in from John Marshall. Kenzie Roy is also a key returning varsity player.

The Del City volleyball team is feeling more comfortable together on the floor this year. The Lady Eagles return six players from last year.

“A lot of these girls have been playing together for a while but this year they’re clicking together and are doing a better job reading the plays,” said coach Ashley Hanne.

Hanne said the team has improved their passing and ability to get the ball to the setter from a year ago. She said they need to continue working on digging and receiving.

“We need to be able to make a play rather than just hitting it back to them,” she said.