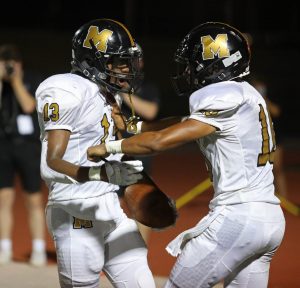 Midwest City’s Xavier Lee-Jackson (Left) and DeAngelo Irvin Jr. (Right) celebrate after a touchdown in a win over Westmoore on Aug. 28. (Photo by Jeff Harrison)

And for Midwest City, that meant a win last Friday night in their season opener against Westmoore.

The Bombers shook off a rocky start, injuries, and adversity for a 27-20 win at Moore School Stadium.

Midwest City’s defense stymied a potential scoring drive late in the fourth quarter, allowing the offense just enough time for a winning score. With 33 seconds left, DeAngelo Irvin Jr. found Xavier Lee-Jackson in the end zone for a 7-yard score and the 27-20 win.

“We just had to improvise a little bit and make some magic happen,” Irvin said. “I just knew we were going to finish it off.”

Irvin completed 3 of 4 passes on the winning drive. He found Makale Smith for a 29-yard gain down the far sidelines and hit Lee-Jackson for a 12-yard gain. A penalty moved the ball down to the Westmoore 7 and the sophomore finished it with a bullet pass to Lee-Jackson in the end zone.

He finished the game 13 of 19 passing for 168 yards with 2 touchdowns and an interception, while also running for a score.

Midwest City’s offense struggled early in the game. They could not move the ball consistently and turned it over twice in the first quarter which led to Jaguar touchdowns. In the second half, they found success on the ground with the combination of Ca’Marian Smiley and Kristawn Friday.

“After halftime, we just went in and had to regroup and get it together,” Irvin said. “The offensive line did great. And everyone did their job.”

Defensively, the Bombers (1-0) were solid all night. They pressured quarterback Dayton Wolfe repeatedly, finishing with five sacks and forcing two turnovers.  The biggest sacks of the night came late in the fourth quarter with the Jaguars driving for a potential go-ahead score. On third down, Arthur Broiles sacked Wolfe and on fourth down, it was newcomer Kasaan Birdsong with the sack to force turnover on downs.

Westmoore (0-1) built an early lead through the air in the first quarter. On fourth down, Wolfe hit Ethan Lawrence for a touchdown and a 7-0 lead with 7:27 in the first.

An interception by Kyle McIver near midfield set up the second score. On the next play, backup quarterback Zane Chavez threw a screen pass to Brandon Arnold, who then hit Lawrence for a 57-yard score with 32 seconds left in the quarter.

The Bombers got on the board midway through the second quarter. Irvin scrambled in the pocket before taking off for a 35-yard score. Kaden Thompson’s extra point made it a 13-7 score.

Midwest City held off a lengthy Westmoore drive to the end the half. The Jaguars pushed the ball to the Bombers 6 but Friday slammed the door shut with an interception near the end zone.

Things continued to go Midwest City’s way in the second half. The defense forced a turnover on downs on the first drive and the offense followed with another trip to the end zone. Friday pushed his way into the end zone from one yard out. Thompson’s kick put the Bombers on top 14-13 with 3:55 in the quarter.

Midwest City added to its lead with a big play late in the third. Irvin hit Makale Smith for a 44-yard score with 30 seconds left in the quarter and a 20-13 lead.

“We weren’t balling like Bombers in the first half,” Birdsong said. “We had our talk at halftime and came out with heart and showed we were better than them.” 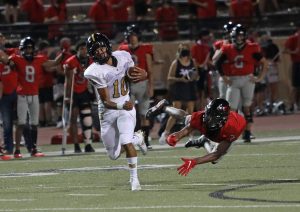 The lead did not last long. Wolfe tied the game at 20 all with a short touchdown run with 6:27 remaining. The Jaguars then forced a three and out and threatened to regain the lead as they drove down to the Midwest City 26. But the Bomber defense again delivered with sacks by Arthur Broiles and Kasaan Birdsong on third and fourth down.

Those sacks gave the Bombers great field position for the winning drive.

“To start out the way we did and come back, says a lot about the team and how we can deal with adversity,” said coach Darrell Hall. “We talk about football emulates life and life is going to hand you curves.  And they dealt with it like we expect them to and with maturity.”

Friday led the defense with 9 tackles, an interception, and a fumble recovery. Broiles had 7 tackles, and Birdsong had 6 ½ tackles, 1 sack and a pass break up.

The victory gives the Bombers momentum heading into a challenging game at Carl Albert on Friday night. The Titans have won four consecutive Class 5A state titles and the last two meetings between the schools.