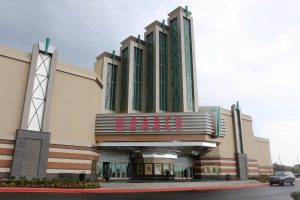 Arvest Bank is seeking foreclosure on the Warren Theatre in Midwest City due unpaid debts and liens on the property which opened in August 2019. (File photo)

The Warren Theatre in Midwest City is in financial straits less than a year after opening.

Arvest Bank is seeking to foreclose on the theatre due to unpaid debts and several liens related to construction of the building.

The Arkansas-based bank, which provided financing for the movie complex, filed the foreclosure action Aug. 26 in Oklahoma County District Court.

According to court records, MWC Warren Theatre, Inc. owes more than $16.78 million under its loan agreement as of Aug. 26.

The Warren Theatre in Midwest City opened for business Aug. 23, 2019.  It was open for about 7 months before closing in March due to COVID-19.  The Wichita, Kansas-based company has not announced plans for reopening.

Arvest issued two separate loans to Warren for equipment and construction of the movie theater at 5905 SE 15th St. On Feb. 14, 2018, the bank approved a $14 million real estate loan and a $3.5 million loan for equipment.

The lawsuit alleges that Warren has failed to make multiple payments of principal and interest.

According to the lawsuit, Arvest says Warren also defaulted on its loan for creation or enforcement of any lien, mortgage pledge, security interest, encumbrances, or other liens, unless timely discharged by Warren or insured by a title company. Several liens have been filed against Warren related to construction of the theater.

Arvest is asking the court to declare its mortgage lien valid and superior to others filed against Warren. The bank wants the theater sold with proceeds applied towards the loan including attorneys’ fees and court costs.

Other subcontractors have also filed liens against Warren, totaling more than $176,000.

Key Construction sued Warren for breach of contract in Oklahoma County District Court on Aug. 25, one day before Arvest filed its foreclosure request. The company is seeking payment of $1,062,622.12 which it says is the “reasonable value of such work.”

The Warren Theatre is the centerpiece of the Sooner Rose Shopping Center development near SE 15th St. and Sooner Rd. The development includes retail, restaurants, and an indoor entertainment complex. The 10-screen theater features a new concept that owner Bill Warren described as “smaller but more luxurious” than others he’s built.

At the time, Warren operated theaters in Moore and Broken Arrow as well as Kansas and Missouri. The company later sold all of its other theaters, except the Midwest City location.

The city created a Tax Incremental Finance or TIF District for property around the shopping center. Sales and use taxes generated within the geographical area will be used to pay back loans for purchasing land and improvements.

Construction of the theater began in early 2018 and was originally slated to be complete by Christmas. Crews ran into several issues with the site early in the process. The city had relocated utility lines that ran through the property and removed several old underground fuel tanks.

City officials said they were aware of the dispute with the construction contractor, but news of the bank’s foreclosure came as a shock. Robert Coleman, economic development director for Midwest City, said he hopes Arvest and the other parties resolve the issues and protect the city’s interest in the project.

“We just want to see the theater back open when it makes sense to do so,” he said. “This theater is vital not only to the Sooner Rose Shopping Center but to the stability of our TIF district. And I think Arvest is aware of where we’re at and how important this is to the citizens of our community.”

Coleman is confident that will happen with Warren or another operator. But he does not foresee movie theaters making a comeback until there is a major decline in the virus or a vaccine is available.

“The fact that the theater closed was not Warren’s fault,” Coleman said.

Attempts to reach Warren by phone and email were unsuccessful. Attorneys for Key Construction offered no comment on the lawsuit.