The city recently terminated its agreement with the State Department of Tourism and Recreation to run the facility due to declining hotel/motel tax revenue that funded its operation for years.

The State plans to remodel the facility and reopen it by the end of the year. It will be run similar to other tourism information centers across the state, said Jennifer Mullins, director of travel promotion.

“We’re working on some branding elements, improving the bathrooms and make it more open for social distancing,” she said. “And we’ll improve the exterior space with some picnic areas.”

City Manager Tim Lyon said operating the Midwest City Welcome Center was a challenge for the city and believes it will be more effective under control of the State Department of Tourism and Recreation. 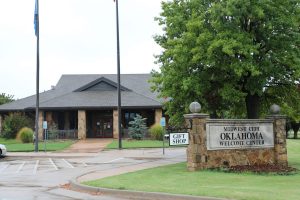 Midwest City canceled an agreement to run the Welcome Center. The State plans to remodel and reopen the building by the end of the year. (Photo by Jeff Harrison)

“I think they will make it more attractive for visitors traveling up and down I-40 and that’s the whole goal,” he said. “It’s a positive change for the Welcome Center.”

The COVID-19 pandemic decimated the travel and hospitality industry. Midwest City’s hotel/motel tax was down almost 40% in the past five months. The tax also funds Parks and Recreation and Economic Development.

It cost the city about $153,000 to operate the Welcome Center with about $142,000 projected in revenue. The city had dug into reserves the past few years to fund the facility.

Lyon said they approached the state when they saw the deficit due to losses in hotel/motel taxes.  The city council and staff decided to end its contract for the Welcome Center rather than subsidize it. Under the agreement, the city needed to provide a 30-day notice to terminate the lease.

“It was obvious we could not continue to operate the Welcome Center without a huge subsidy,” Lyon said. “We would have had to move money out general fund or something.”

Lyon said the city offered to buy the building with plans to convert it into a restaurant or retail space, or a hybrid model that would include a restaurant and a welcome center. The State rejected any offers.

“We would have like to repurpose it,” Lyon said. “It’s in a prime area for a restaurant or a retail location that would have had a greater impact on the community.”

The one full-time and one part-time employee transferred to other city departments. The other employees were laid off but may be rehired when the State reopens the Welcome Center.

The Welcome Center was created through a 1997 interlocal cooperation agreement between the City of Midwest City, the Oklahoma Tourism and Recreation Department and the Oklahoma Capitol Improvement Authority. Midwest City agreed to lease the land and operate and maintain the Welcome Center. The State paid for construction of the building through a bond. The lease continues for 50 years.