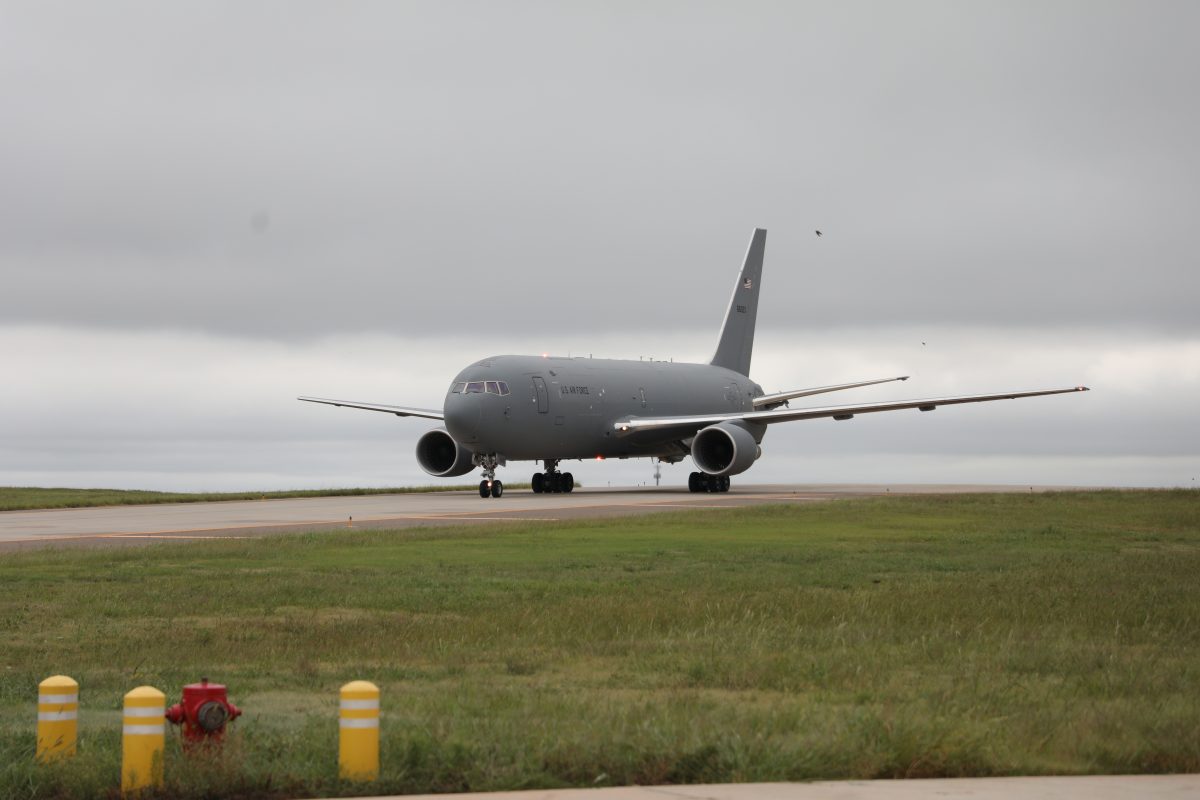 A KC-46A Pegasus aircraft makes its ways down the taxiway. (Photo by Jeff Harrison)

The first KC-46A Pegasus aircraft received a warm welcome from Tinker employees and Air Force officials as it flew into the base last Thursday to receive its initial maintenance check.

“It’s a unique thing in the Air Force to have a new weapon system come online,” he said.

The military’s next generation aerial refueling tanker will replace the aging KC-135 fleet. The aircraft features more refueling capacity and enhanced capabilities for cargo and aero medical evacuation. It was developed by Boeing from its 767 jet airliner.

The aircraft received a water salute from Tinker firefighters as it made its way towards the maintenance facility and crowd of employees.

Lowe said that picture of the aircraft tunneling through the water archway and the welcome committee was a memorable one.

“That’s the purpose,” he said. “We’re not here to just turn wrenches and change tires. We’re here to put 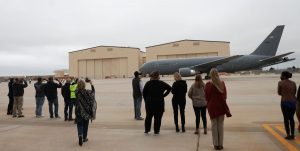 Employees watch as the KC-46A aircraft arrives at Tinker Air Force Base. (Photo by Jeff Harrison)

airplanes back in the air. There are American airmen who are putting their lives on the line every day and the hard work of the men and women of the Oklahoma City Air Logistics Complex, our partners in the program office in the supply chain, make sure those aircraft get there safely.”

Tinker will handle maintenance, repair and modifications for the next generation tanker fleet. The KC-46A will come to Tinker every two years for an overhaul or C-Check to keep in line with FAA maintenance techniques.

“Every two years, it will come here for about a month and we’re going to go into a much greater detail of depth,” Lowe said. “It’ll be more inspections, more replacement of parts to keep the aircraft structurally fit for a long time of service.”

Gene Harris, 568th Aircraft Maintenance Squadron director, said the base will initially receive two aircraft for maintenance. The base will eventually handle 90 aircraft per year.

“We have maintainers who have been doing maintenance on legacy platforms, the KC-135s and B-1s, so we feel we have the maintainers able to support this workload,” he said. “We are postured to work with our Boeing partners, as well as our supply chain partners, to give us everything that’s required to return this aircraft back to its operating base. The men and women of the 568th are excited to take this into the future.”

Tinker leaders had been preparing for this day for several years. In 2016, they broke ground on the first maintenance hangar at the new KC-46A maintenance campus. The 156-acre campus is being built on the site of a former railyard. In October, Tinker celebrated opening of the first of the 14 hangars. Two other hangars are nearing completion with more added in the coming years.

The first KC-46 aircraft arrived at McConnell Air Force Base in January 2019. It was selected as the main operating base for the new fleet.