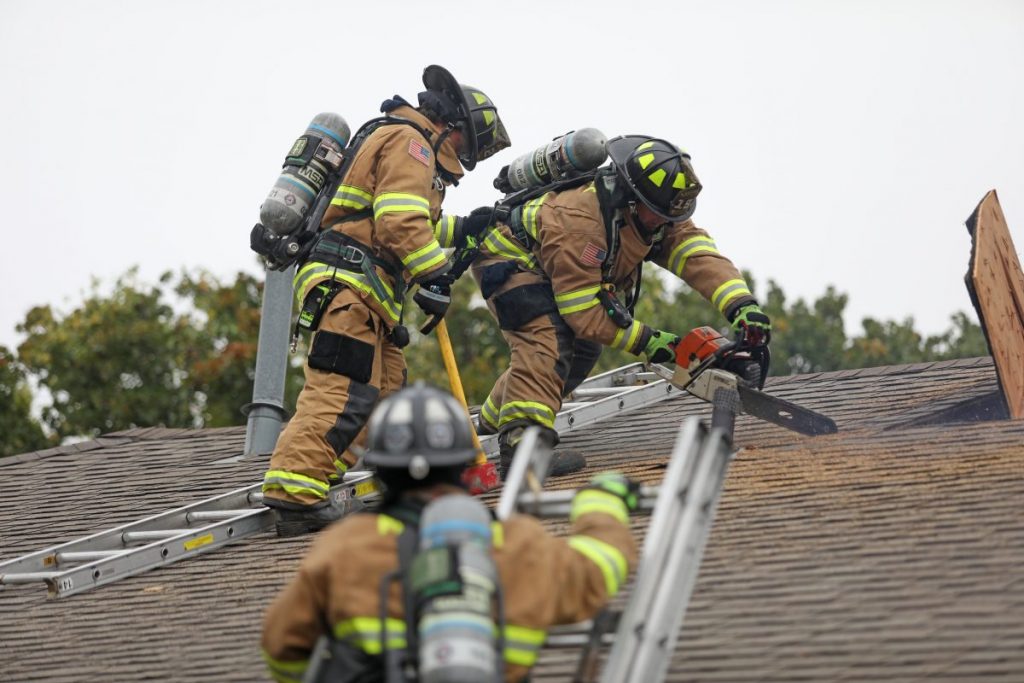 Midwest City firefighters practice ventilating a roof during a training exercise last Friday morning. The department
conducted full training exercise at a home that is slated for demolition. (Photo by Jeff Harrison) 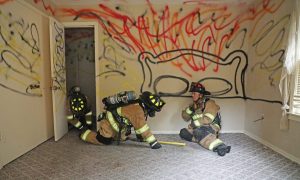 Midwest City firefighters search for a fellow crew member during a training drill at a house that is slated for
demolition. Firefighters painted the walls to show where fire would spread. (Photo by Jeff Harrison)

There’s an old adage that one person’s trash is another person’s treasure.

That was certainly the case last week for an old house and a team of firefighters.

A developer plans to tear down a house at 8712 E. Main St. to make way for a new duplex project. Before doing so, he allowed Midwest City Fire Department to use it for non-live fire training.

Firefighters completed full training exercises and practiced different skills at the ranch house. To simulate fire, they spray painted different walls to indicate the temperate and location of flames. The team used a hose line to attack the fire and search for victims in the bedrooms, while others cut a hole in the roof to ventilate smoke.

Crews from three stations trained together at a time and switched. The goal of last week’s training was to work with new firefighters, said Brian Brush, Midwest City fire training chief. 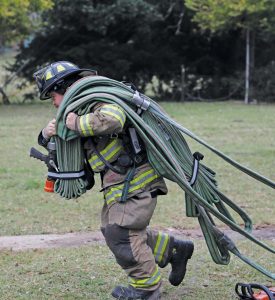 A Midwest City firefighter pulls a hose from the truck Friday during a training exercise. (Photo by Jeff Harrison)

“Getting them to work with crews on a non-emergent house fire is a really good way to get the training,” he said. “We can do a lot of skills and we can coordinate all activities together.”

The fire department has received permission to train at residential and commercial properties in the past, but have taken a more active role in seeking them now. Anyone seeking a demolition permit with the city receives a letter notifying them about the training opportunity for firefighters. The fire department has also promoted it through social media.

“We would get to some by chance or by someone reaching out to us, but this is the first time we’ve actively reached out to others,” Brush said. “This is the second one we’ve been able to do since we started it.”

“A lot of the training towers have concrete floors and this is a house with real carpet and a real roof so it’s what they’ll see in the real world,” he said.

Brush said each property owner is different. Some allow firefighters to train for a few days and others provide a couple weeks.

“Anytime we get a building for training we want to use it,” he said. “Usually the developer wants to clear it off so they can get the new project going. But it’s all good training for us.”