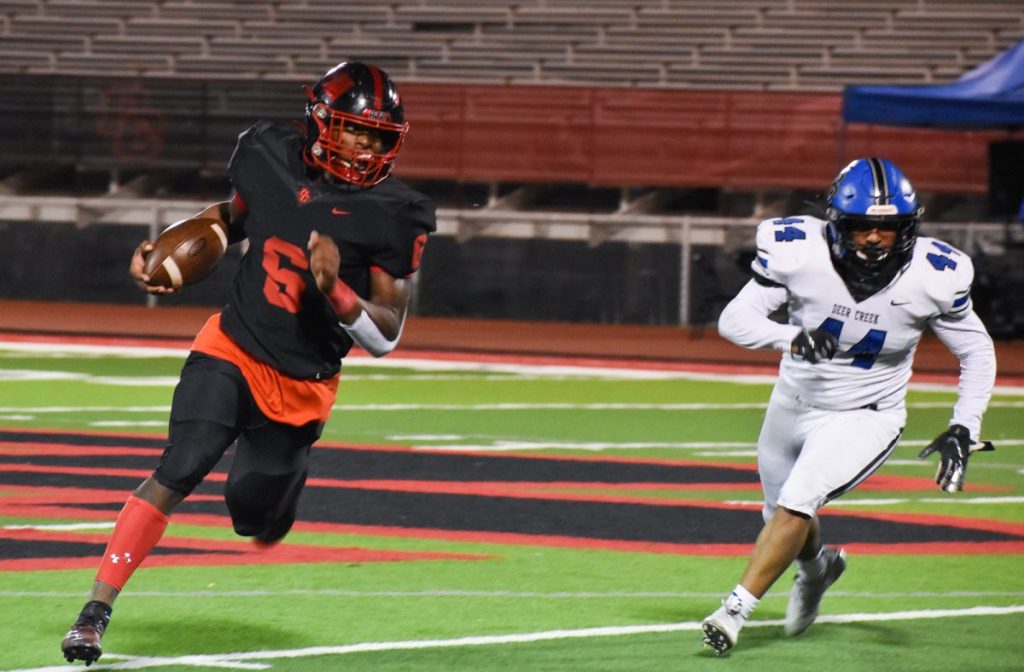 Friday night was homecoming at Robert Kalsu Stadium and Del City put on a show.

The Eagles scored 28 unanswered points in the first half and cruised past Deer Creek 28-14 for their first win of the season.

“We’re proud of our kids. This is a real resilient group. When I came to Del City four years ago people told me these kids did not have what it takes, they aren’t resilient enough, but they are,” said coach Mike Dunn after the win. “If people saw us in practice, they would think we were 5-0. These kids work hard and I’m proud of them.”

Del City (1-5, 1-3) made several changes to their game plan for Friday night’s game. Most notably, they moved the versatile Jahkobie Smith to running back and Ja’Kheo Mitchell to the starting quarterback position.

The backfield duo combined to score all four of the team’s touchdowns in the win. Mitchell was 10 of 19 passing for 67 yards with one interception and ran for 129 yards and one score. Smith ran for 97 yards and three scores.

On the opening drive, Mitchell scored a 75-yard touchdown to put Del City up 7-0. Smith added an 18-yard score later in the first for a 14-0 lead. The Del City defense was determined to not let the Antlers get a first down in the opening quarter. Sevaughn Sephus recorded two sacks in the quarter.

The Eagles did not let off the gas in the second. Early in the quarter, Sherrod Davis recovered a Deer Creek fumble. Smith later scored on runs of 22 and 1 yard for a 28-0 lead.

The Del City defense made another big play when Brian Stocker got a sack near the end of the first half.

Despite not scoring again, Del City’s defense was able to shut down the Deer Creek offense.

Early in the third, Stocker was able to force a fumble that was recovered by Davis. The Eagles were not able to convert for a touchdown.

Later in the quarter, Deer Creek (2-5, 0-4) intercepted a pass by Mitchell and took over on the Eagle 39. Deer Creek quarterback Brett Pense made a 29-yard run for the Antlers first points of the night.

Heading into the final quarter of play the Eagles were up 28-7.

Del City was looking to close out the game, but Deer Creek was not finished fighting yet.

Early in the fourth quarter, Will Hilton scored with a 2-yard rushing touchdown to make it a 28-14 score.

The Eagle defense closed out strong with Sephus and Kevin Green converging on Pense for the final sack of the game.