A pair of former educators are on the ballot in House 95. 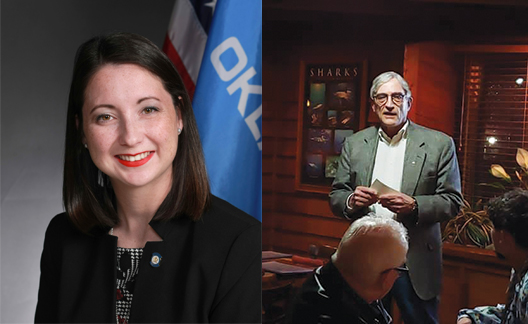 Albright is completing her first term in office after winning the seat in 2018. She was one of several educators elected to state office following the teacher walkout. Albright fought through a crowded primary and defeated Republican Jack Beal Jr. in the general election.

In her first term, Albright was most proud of bringing the “voices of children, families, and teachers” to the conversations at the Capitol.

“One of my biggest strengths is that I ask the tough questions and I help bring in missing perspectives to conversations,” Albright said. “Making strides in the ways we approach improving education and other areas impacting Oklahoma, while setting aside ego on who gets credit has been one of my proudest accomplishments.”

Albright prides herself in working behind the scenes and across the aisle.

“Despite the vitriol of the national political realm, I have lots of good working relationships with colleagues on both sides of the aisle and outside the Capitol building,” she said. “Because of the mutual respect I have earned through building relationships across the aisle and a reputation of hard work, I’m able to advocate for my district through productive dialogue. Rather than simply tossing partisan grenades for political gain, I build consensus on shared values and find ways to bridge the divide for the benefit of our state.”

If re-elected, Albright says she will continue to keep a watchful eye on education as the state faces a budget shortfall and ensure that public tax dollars go to public schools. Helping veterans and seniors will also be a focus of a second term, Albright said.

“I have filed legislation to push for more school counselors, better insurance benefits for teachers and their families, and cost of living adjustments for retirees,” she said. “Working on improving conditions for veterans and seniors has been a priority I will continue to work towards, as well as ensuring Oklahomans have access to health care and mental health services.”

Albright says residents of House 95 always have her ear. She said she worked with local officials to ensure legislation is not harmful to municipalities and advocated on behalf of residents with a variety of issues.

“Recently, I have spent a lot of time working with constituents on their OESC unemployment claims as a result of the pandemic,” Albright said. “Additionally, I am always present in the district for important community gatherings to listen and learn from those I have the privilege to serve.”

She hopes that hard work and community engagement will lead to another election night victory.

“There’s not another candidate who will outwork me in reaching constituents, listening to their struggles, and hustling to address their concerns,” Albright said. “I was born and raised in this community and can promise I will be here for many years to come in order to make it the best it can be for everyone who calls this place home. I’ve put in countless hours taking the time to build relationships with constituents, community and local leaders, as well as many relationships across the aisle in order to best serve my district. I have the experience, temperament, and have earned the respect necessary to bring a bright future to House District 95. I hope to continue to fight for all Oklahomans at our State Capitol on Nov. 3 and beyond.”

Wolfley has lived in Midwest City for much his life. He and his wife Brenda bought their first home in the Original Mile 44 years ago and raised their two sons and six daughters in the district.

Wolfley describes himself as a “pro-life teacher who supports traditional values and common-sense economic policy.”

“My priority would be making sure our tax dollars go where we think they are going and accomplish what we thought they were going to do, including fully funding education without the administrative burden of 537 district superintendents,” he said. “We also need to address the nursing shortage.”

Wolfley said the biggest challenge facing House 95 is getting the “economy back to normal.”

“To do that we need to attract new businesses and do right by the ones that are employing our families right now,” he said.

Wolfley has made unsuccessful runs for House 95 in the past. He said his motivation is the same.

“I ran in the past with the same two main goals: To make sure our tax dollars are spent wisely and protect those who can’t protect themselves,” he said.

Wolfley says he separates himself from his opponent through his experience as an educator and views on abortion.

“I’m the only Pro-Life candidate in this race,” he said. “As a Mid-Del teacher, I’ve seen education dollars fail to make it to the classroom for 40 years and saw it again in 2019. We can change that.”

Wolfley also criticized his opponent for several votes in the House and support for organizations that he says promote defunding law enforcement.

“I support law enforcement and the rights our veterans fought for while my opponent asks that you donate to organizations that seek to defund the police and bail rioters and looters out of jail,” he said. “She also has voted against second amendment protections, free speech on college campuses and cooperating with immigration authorities.”

Albright criticized Wolfley for switching political parties during previous runs for the seat.

“I can’t say I know a whole lot about my opponent other than that he has had several unsuccessful runs for office over the years, running as both a Republican and a Democrat at times, changing to suit his perceived winds of favor,” Albright said. “I can only say that I always stand true to my values, not looking for the Republican answer or the Democratic answer but looking for the Oklahoman answer.”

House 95 includes much of Midwest City.