Students in Mid-Del Schools will be returning to the classroom next week.
The Mid-Del School Board held a special meeting last Thursday to consider changes to the district’s Return-to-Learn Plan.
Teachers stood near the street of the administration building holding signs expressing their desires to keep to the original plan. They also lined the walkway leading up to the building, making sure that everyone who attended knew their stance. 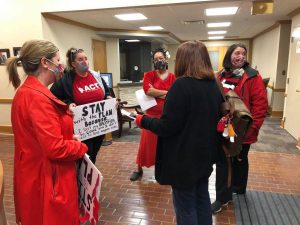 Teachers express disappointment after the Mid-Del School Board agreed to return to in-person instruction four day a week. (PHOTO BY TONYA LITTLE)

Superintendent Rick Cobb presented many statistics during the meeting, including the results from the survey that was taken from both parents and staff about students returning to the classroom. The parents who participated in the survey show 50% want students to return to in-class learning, 42% want to keep the A/B schedule and 8% had no preference. Overall, 66% were still in favor of keeping Wednesday as a remote learning day if the decision was made to return to the classrooms.

The staff who participated in the survey showed 36% want students to return to in-class learning, 57% want to remain on the A/B schedule and 7% had no preference. Overall, 88% were in favor of keeping Wednesday a remote learning day should they return to in-class instruction again.

There were many reasons given for how remote learning and the A/B schedule were affecting students and this school year. The data collected for the first academic quarter of this year has shown a significant drop in attendance across all grade levels. This included 198 high school students that would be in danger of being dropped due to non-attendance. District wide, 23% of students enrolled in Algebra I have an F as of right now, compared with 7% at this time last year. Decades of research has shown the passing or failing of Algebra I being directly tied to whether a student will drop out or not.

Many school counselors believe that the A/B schedule isn’t meeting the social and mental health needs of students, nor giving teachers enough time with students to develop connections and bonds or to be able to detect abuse or neglect. As of this time in the last school year there had been 52 reports of child abuse or neglect compared to 17 this year, and 25 reports of suicidal thoughts or self-harm compared to 9 this year. This isn’t due to child abuse, neglect or kids considering suicide dropping this year, it’s a matter of the teachers and counselors not having enough in person time with students to discover these things. These were just some of the many reasons given on why going back to in-classroom instruction would be beneficial to the students in various ways.

Four guests were invited by Cobb to speak at the meeting, two parents and two teachers of which one of each was for returning to the classroom and one of each was for sticking to the A/B plan. The parents were Dr. Ryan Biggs, M.D. and Christopher Craig, and the teachers were Stephanie Skidmore of Carl Albert Middle School and Kristy Cooper of Del City High School.

“School is much more than teachers teaching, it’s teachers loving on kids”, said Biggs. “I have seen, to me, a catastrophic amount of worry, anxiety and physical ailments in the kids I treat that I can attribute to stress. COVID affects adults physically but it affects kids mentally, and we just don’t know how far down the road this pandemic is going to affect these children. It’s not about eliminating COVID, it’s about mitigating the most risk for the most amount of people.”

“Everything that has been said tonight I hear and I take to heart, I’m in the classroom every day and I see it, but I also have been so thankful for the safety that the Board has given us as teachers by running on the A/B model,” explained Skidmore. “With where our current COVID cases are in the state of Oklahoma and in Oklahoma County, they are still rising. I believe the blended model is the way that we will still be able to make the most out of teaching in a global pandemic and keep both students and faculty safe.”

Skidmore was followed by Cooper who spoke for returning to in-classroom instruction.

After the public comments, Cobb gave his recommendation to return to in-person instruction four days a week starting Nov. 9. The district would keep Wednesdays as a remote learning day for the remainder of the calendar year and reassess the plan after the holiday break.

Cobb also recommended going to all remote learning if the number of available hospital beds in Oklahoma County dropped below 5%. The board all spoke and gave their opinions on everything discussed during the meeting and then took a vote, which resulted in a unanimous decision to implement Cobb’s recommendations.

Many teachers were visibly upset after the meeting was adjourned. One teacher who wished to remain anonymous stated that it was discouraging to feel like their lives and safety didn’t matter as much as everyone else’s. One parent also made the comment that a decision about kids and teachers returning to school full time made by leaders behind plexiglass for their safety was confusing. However, there were also many parents and educators who applauded the decision to return to the classroom.

On Nov. 9, Mid-Del students will return to in-class instruction 4 days a week. The board will then reassess the plan after the holidays.