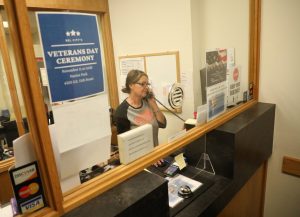 Mayor Floyd Eason said the city is focusing on improving customer service and communication with residents.

“When you come to City Hall, we want you to leave in at least as good of a mood as when you came here, and hopefully better,” Eason said.

“Billing has been a problem area for us and that’s what we’re working to solve,” Eason said. “We didn’t have a direct supervisor over utility billing and it fell under the City Clerk and it was just hit or miss. The City Manager had been jumping in to help fix problems with accounts.”

Improving communication is another priority for city leaders. The city is increasing its presence on social media and improving training for customer service.

Eason said the city’s need for improved communication became evident recently with changes to the utility billing dates. The city had been billing customers eight weeks behind. For example, a customer’s July bill would reflect their usage from May. A recent audit condemned the practice and the city shifted its billing dates to “catch up.”  Eason said the decision to adjust the billing dates was not communicated to the city council or the public.

“All of the sudden, the billing days were changing and it caused a lot of confusion,” Eason said.

To make matters worse, the city had also recently raised its water rates. It was the first rate increase since 2011 and was necessary to fund operations and maintenance for the water system, Eason said.

“We were operating in the red and needed money from other accounts to subsidize the water service,” Eason said.

Due to the changes in the billing dates, Eason said they are offering assistance for individuals on a case by cases basis.

“If you’re on a fixed income that can be frustrating and we feel people’s pain on it,” Eason said.

Eason said the city should be caught up with the utility billing by January.  Utility customers can then expect to have their utility bills reflect usage from four weeks prior.
Del City has also hired Miranda Hodge who will serve as marketing coordinator and grants writer. She is overseeing the social media accounts and helping the city acquire more grant money.

“We did not have a full-time grant writer before so this should help get funds for parks and recreation, the senior center and other things,” Cantrell said.

Del City also hired Mike McEwen to serve as parks and recreation director. McEwen was a former NHL star who has been active to develop hockey in the Oklahoma City metro. He will work to developer programs for all ages and improve the parks.

“Improving the quality of life in Del City is another goal of ours and Mike [McEwen] will do a fantastic job by building our parks and recreation,” Eason said.