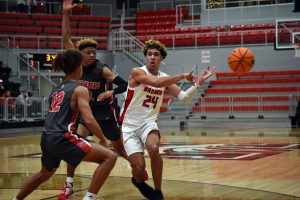 Jacobe Johnson is a returning starter for the Broncos. (File photo)

High expectations abound this year for the Mustang Broncos Men’s Basketball team, after retaining much of their team back from last year. Highlighting that list of returning players are leading scorers, Ethan Scott and Jacobe Johnson. Scott averaged a team high 17.1 points per game last season, and Johnson averaged 16.1 points per game.

“The strength of our team is our team” is the mantra Head Coach Scott Hodges tells his players every day.

“We have a lot of guys who can play at a high level, and we have great depth,” Hodges said.

Hodges’ goal by the end of the season is not to win a rivalry or even a state championship.

“I want to play the best basketball we can by the end of the season, and hopefully when March comes around, we will be at our full strength,” Hodges said.
The Broncos will take the court for the first time this season, Friday against Edmond Santa Fe. Tipoff is scheduled for 7 p.m.