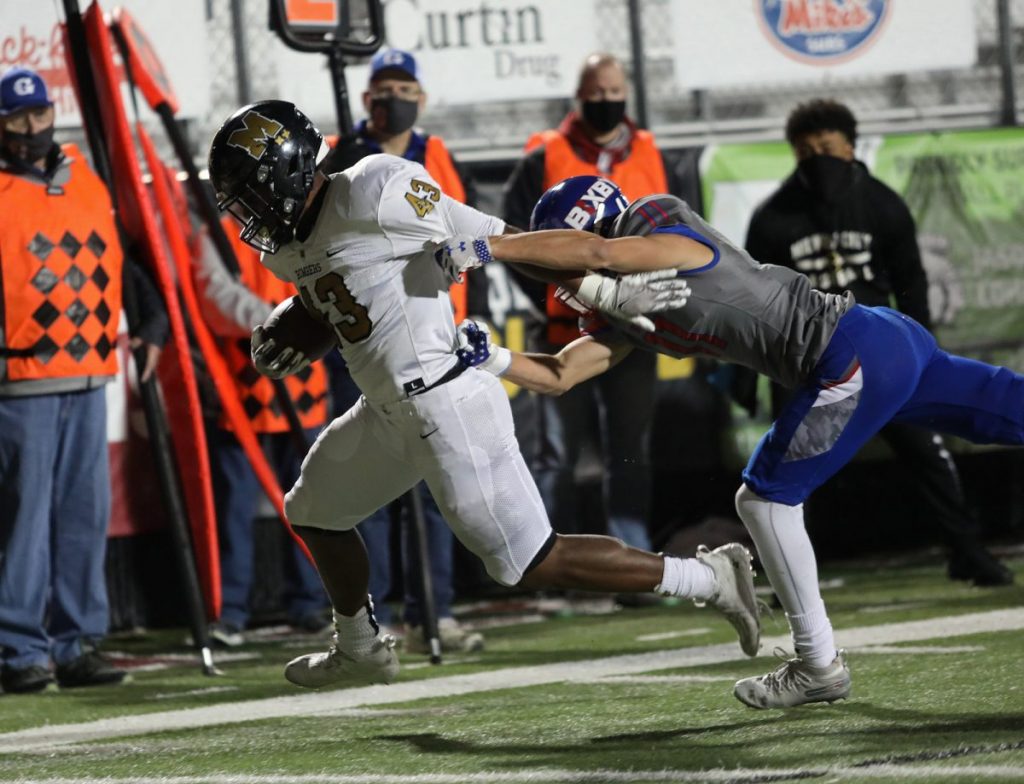 But they couldn’t quite catch the defending state champs.

The Bombers (8-3) wiped away an early 14-point deficit and continued to nip at the Spartans’ heels in the first half. Midwest City kicker Eljiah Escobar hit a field goal at the end of the first half and Bixby led 21-17.

The Spartans (10-0) broke open the close game in the third quarter with help from Braylin Presley. The junior tailback ran for three touchdowns in the quarter powering the Spartans back to the state championship game with a 49-20 win at Allan Trimble Stadium.

“I’m proud of my team. They battled, but I think we just hit a wall,” said coach Darrell Hall. “That pace they play is hard to stop. We just ran out of bodies.”

Presley finished the game with 282 yards and four touchdowns on 34 carries.

“We had our chances to stop him [Braylin Presley] and if you miss those chances, he makes plays,” Hall said. “A lot of times we were close to pulling him down and didn’t get there. And the result was big gains.”

Midwest City fell behind 14-0 early in the game. DeAngelo Irvin Jr. threw a pick six to Dylan Hasz on the second possession. Bixby’s Jersey Robb scored a 1-yard rushing touchdown in the final minute of the first.

After the slow start, Irvin and the Midwest City offense heated up in the second quarter. He completed passes to Artez Young for 17 yards and Andre Miles for 10 before taking it himself around the right end for a 16-yard touchdown run.

The Bombers quickly got the ball back when Juwan Dancy intercepted a fake punt pass. They again marched down field as Irvin carved up the defense with quick perimeter passes. On third down, he fired a rocket to Makale Smith who made a leaping grab at the Bixby 1. Kristawn Friday was stopped in the backfield on the next play, but on second down plowed his way to the end zone, tying the score 14-14 with 5:10 left in the half.

Presley put the Spartans back on top 21-14 with 51 seconds remaining in the half.

That left enough time for another Bomber score. They moved the ball across midfield with a 29-yard reception by Smith. Young followed with a one-handed grab on the sidelines and a 29-yard catch to move the ball into the red zone. With time ticking away, the Bombers brought out Escobar who split the uprights from 33-yards to make it a 21-17 score at the break.

Escobar hit another kick from 41 yards in the third quarter, making it a 28-20 score.

“He improved as the year went on and we trusted him tonight. He hit a big one before the half and then that one that kept us in an eight-point game,” Hall said.

That’s all the closer Midwest City would get.

The Spartans will face Choctaw (9-3) in the Class 6A-II state championship at 7 p.m. Saturday at the University of Central Oklahoma’s Wantland Stadium.

The Yellowjackets upset Stillwater 38-35 in the other semifinal on Saturday. Bixby beat Choctaw 24-13 in the district game on Oct. 9.