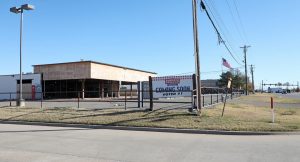 Swadley’s is opening a location at 6905 SE 29th St. in Midwest City. (Photo by Jeff Harrison)

Work on the building recently resumed after months of inactivity. The project was paused as Swadley’s focused on another concept called Foggy Bottom Kitchen, which opened four locations in 2020. Swadley’s is working with the Oklahoma Department of Tourism on the Foggy Bottom Kitchen and has locations at four state parks with plans for three more, according to Deborah Floyd with Elevated Marketing.

Swadley’s restaurant in Midwest City will be similar to other locations in the metro. The restaurant chain serves up brisket, ribs, smoked turkey and more. They also operate Jim’s Famous Chicken in Nicoma Park.

The restaurant is expected to open in mid-February to early March.

The Midwest City restaurant will be in the former Enterprise Rent-A-Car building. The 6,000-square-foot building is undergoing a $1.5 million renovation, according to Curt Breuklande, executive vice president for Swadley’s.

Breuklande said they have been interested in expanding in Midwest City.

“We want to give folks in the military and Midwest City some good barbeque,” he said during an interview in February. “Midwest City is a growing area. We drove over there and noticed the building for lease and made them an offer they couldn’t refuse.”