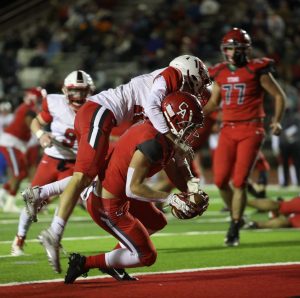 And that DRIVE will continue at home as the Titans won the coin toss and gained home the home field advantage for the third straight week. The Carl Albert boys will host Collinsville Friday night at Gary Rose Stadium at 7 p.m. McGuinness will be playing across town against McAlester in the other 5A semifinal.

The Collinsville Cardinals, now 12-0 for the season, are ranked No. 3 behind Carl Albert and Coweta. The Cardinals drew forfeits in their two playoff games before dispatching Guthrie, 41-24 Friday night.

The Titans will face Collinsville in the OSSAA Class 5A semifinals this weekend while McAlester and McGuinness will meet in the other semifinal.

But with all the attention to the “O” it was the Titan defense that turned the tide against the Comets, who scored all their points late when Coach Brad Beller left his regulars in against the Titan reserves.

It was a flurry of fumble recoveries, pass interceptions, tackles for loss and the ultimate for any defense, a safety, for a 36-0 lead when Coach Mike Corley sent in the reserves.

Ben Harris, now 50-2 as rare (for 5A or 6A) starter for CA, credits his defensive buddies. “They just kept giving us the ball. You could see the frustration by Kelley. Nothing they tried worked. Our guys completely dominated the game.

“We’re down to two, two more wins to realize our Drive for Five. We’re playing them one at a time. Collinsville will be tough and we will be playing at a neutral site. It’s exciting,” Harris said.

Kentrell Bizzell split his considerable skills on both sides of the ball, scoring three touchdowns while the Titans had the ball, and racking up a blocked punt, a fumble recovery and 9 tackles from his linebacker spot for the stingy D.

THE TITANS were forced to punt on their first possession but on Kelley’s first play, Corey O’Hagan and Charles Fleming doubled on Comet star Owen Heinecke and forced a fumble that Bizzell pounced on the ball on the 20. Following a loss and a penalty, Harris connected with Russell for a 25-yarder to the one and Bizzell followed Wisdom Combs and his buddies into the end zone out of the wildcat.

Jacob Eddy then drilled the snap from Dax Swanner to Russell for the first of four PAT’s to go with two 40-yard field goals and a lead the Titans would never surrender.

Dondi King came up with an OSKIE to set Harris and Co. up at the 18. Two plays: Bizzell blasted into the end zone and Eddy made it 14-0. Following a pass breakup by Mason McNeill, Eddy made it 17-0 with a 40 yard beauty.

Defensive whiz Ezra Gustafson broke up a pass and sacked QB Gabe Harju to force a punt to give the Titans the ball on their own 24. Then came an impressive 76-yard drive in 11 plays with Hunt and Bizzell carrying the load and Harris connecting with Crews and Russell, resulting in a 6-yard Wildcat by Bizzell for a 24-0 halftime lead.

Keyon Dickerson pounced on a fumble to open the second half to give Harris the ball at the 43. After a 21-yard completion to Crews, Ben hit his buddy Houston Russell for an 11-yard TD and Eddy made it 31-0.

DeAngelo Shanks had yet another pass interception to give Eddy an opportunity for another 40-yarder and the junior’s strong right leg made it 34-0.

Bizzell apparently had his fourth TD following a Kelley punt but the ball came loose at the one. The Comets’ joy was short-lived as Gustafson and Xazavier Ware combined to dump Harju in the end zone for a safety and a 36-0 bulge.

Titan fans weren’t too pleased when the Comets exploited the Titan reserves with a barrage of long passes and all their scores in the final four minutes of the contest.