The Midwest City Council will see less of each other next year.

City leaders approved a council meeting schedule for 2021 that requires them to meet only once a month for seven months of the year. 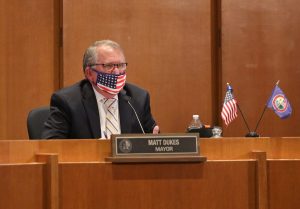 The new schedule includes only one meeting in February, April, May, July, September, November, and December.  The council will meet twice in January, March, June, August, and October. Meetings will continue to start at 6 p.m.

It will reduce the number of regular council meetings from 22 to 17. The council previously met on the first and third Tuesday of each month except in July and December.

The city council will also schedule special meetings as needed.

That issue was brought up again at the Dec. 8 meeting. Councilman Pat Byrne requested that the council make all the meeting start at 6 p.m. He said he did not support reducing the number of council meetings but agreed with it after hearing from city staff. He said city staff agreed with the idea of reducing the number of meetings but not having alternating start times.

“I felt like we owe it to the staff,” he said. “We all signed up for this and knew what time it was going to be. There needs to be some transparency.”

Councilwoman Susan Eads, who requested the 6:30 p.m. meeting times at the October meeting, conceded her request for the time change and asked the council to revisit the plans for fewer meetings.

“The nights that we go to one meeting are going to be longer meetings,” she said. “…Why don’t we just go back to the way that it was with 6 p.m. meetings two times a month? And everyone can deal with it.”

Mayor Matt Dukes shot down the request for discussion.

The motion passed by a 6-1 vote. Eads voted against the item.