It took 19 trucks working 38 days to clear the first pass of debris from a late October ice storm that caused extensive damage across the area, as city of Mustang crews returned to the task Jan. 5, after taking a holiday break, City Manager Tim Rooney says. 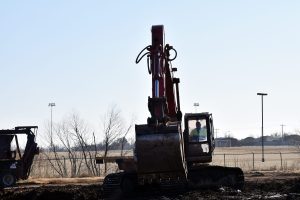 Mustang crews work at the city’s storm debris staging area, where tons of debris have already been processed and sent to the Canadian County landfill, located near Union City. (Photo by Traci Chapman)

Rooney issued his Dec. 31 report concerning debris cleanup, which contained data compiled as of the evening of Dec. 22. As of that time, crews hauled 3,737 loads totaling 186,812 cubic yards of storm-related debris, Rooney stated in his Dec. 31 city manager’s report.

“Please note the amount of debris hauled represents more than twice the among of any previous ice storm recovery effort,” he said.
Crews resumed their work last week and hoped to complete their clean-up efforts the middle of next week, weather permitting, the city manager said.

“(We would) just like to thank people for being patient, understanding and cooperative,” Rooney said Monday.
It’s been a long, difficult job, in not part complicated by a second storm overnight New Year’s Eve and Day that caused additional damage causing headaches to officials, particularly those in Oklahoma City, which extends through parts of Canadian County.

Those areas, including south of Mustang, still have not had any storm debris picked up from the Oct. 26 storm; officials there said Monday it could be months before clean up efforts are completed in those suburban areas. Many of the homes in that area are located on multi-acre lots, with “many, many” suffering extensive damage, they said.